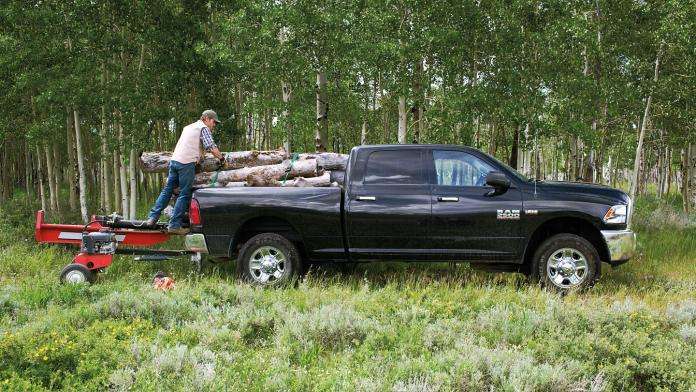 Many truck owners have complained of rust destroying their running boards, especially when they are steel or painted black. The owner of a 2017 Ram 2500 is asking for recommendations about longer lasting black side-steps.
Advertisement

Blue is trying to do the best for his brand new 2017 Ram 2500. He is looking to buy black side-steps but concerned about all of the problems that other owners have run into. Blue asks members of a popular Ram truck forum what might work best for getting through the rugged Minnesota winter. “I definitely need to add some side steps to my 2017 2500. I have the Sport package so it is all body color and blacked out, zero chrome. And I will be keeping it that way. What I want are fairly simple black semi-rectangular wheel-to-wheel steps that are mostly straight (don't like them to bend in at the ends). Tried to get some dealer-installed for the 3-year warranty but the only black step Mopar has for the 2500 (according to dealer parts dept) is the standard door to door black oval ones, not wheel-to-wheel.
Then I went to an aftermarket place and he didn't have anything in stock either. He strongly suggested to me that stainless (polished) is a better choice here in Minnesota due to rust from road salt. He said any black ones he's seen start rusting after a year or so. He said if I want black I should get them Rhino-lined right off the bat. Which he conveniently also sells. So, questions: Does someone make a wheel-to-wheel black rectangular side step? Is it really true that black steel steps rust super quickly in winter states? I don't necessarily doubt that because even the stock chrome ones (not stainless) peeled pretty badly.”

Painted steps may not hold up in heavy weather states

Red says he has seen a number of people have problems. “I think you can find black ones with stainless underneath but I have seen many black ones rusting out after three or four years. The place I bought at said the same things you heard and my eyes have confirmed the problem with the black ones.”

Fishing, from Ontario, says his rusted out after a year. “Look at the Westin R5 in black. From what I read it's aluminum painted black . And is that's the case I'll be getting them. I had a set of DeeZee on my 2016 and they rusted out after one winter.”

Dog, from New York, is looking for something similar. “I have been looking into side steps for a while now as I want to get the right pair... I liked the ICI Magnum RT steps at first, then read about people who said they rusted easy and the step was to narrow at 2". So I found Westin HDX drop steps that I still like the look of (similar to the magnum rt). They are good and stout and people don't say anything really bad about them.”

Joey, also from Ontario, says he likes the Westins. “I've got the Westin HDX Drop Steps & am happy with them. Westin brought out a new version on the same theme with the HDX Extreme Running Boards. They look really cool too.”

Gopher, from Minnesota, says he is hoping that washing his truck frequently will keep the rust at bay. “I bought the black Mopar ones and installed in March. Hopefully they don't rust. I also have an unlimited car wash plan so I can take my truck in and wash it daily year round. That should help.”

Ivey, from Texas, has found side-steps that he really likes. “I went with AMP research steps and love them!”

Blue thanked everyone for their suggestions and seems pleased with his final decision. “I was told by both a Line-X and Rhino Linings shop that they could not coat polished stainless steps. They can't rough the finish up enough for it to stick. I went with black steps and had them Rhino Lined. They turned out superbly and look great. Here are a couple pics with them mounted. The Raptor Series are, feature-wise, everything I wanted. Wheel-to-wheel, wide-oval tubes, saddle step pads (not sunken), fit with factory splash guards, mount to factory holes in rocker panels, and they have welded, fairly flattened end caps instead of bulging plastic press-in caps. I am hoping they hold up well for a long time.”
A huge part of the rust problem is moisture being trapped between the steps and the truck body. It is especially tough in states like Wisconsin, Michigan and Minnesota that have long winters and use salt on the roads. Frequent washing should help but making sure the coverings are rust-proofed will also help a lot.

LG's New EV Battery Plant Is a Welcome News for Tesla
Tesla Giga Berlin's New Hurdle: It's Not Only the Gov't, but Now Tesla Itself
END_OF_DOCUMENT_TOKEN_TO_BE_REPLACED