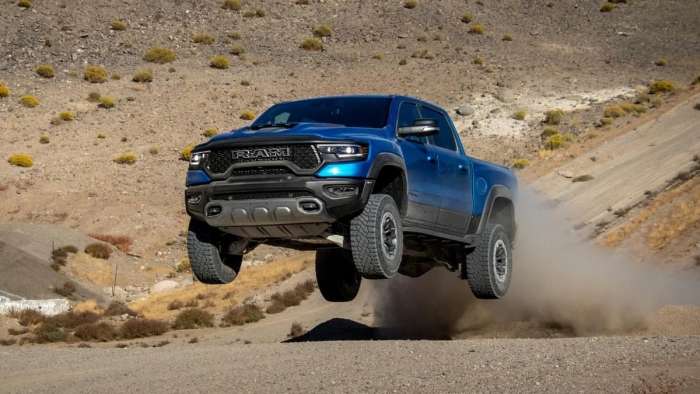 One of the most anticipated vehicles of 2021, the Ram TRX has been selected as a North American Truck of the Year finalist. It will face off against two strong competitors.
Advertisement

Ram’s long-awaited beast of a truck, the 2021 Ram 1500 TRX, is fighting the Jeep Gladiator Mojave and the newly redesigned Ford F-150 for the title of North American Truck of the Year. The North American Car, Truck and Utility Vehicle of the Year awards are considered tremendously prestigious, because the awards are voted on by fifty journalists and are not tied to any one publication or broadcast outlet.

The Ram TRX roars in with an astounding 702-horsepower. During recent media events, the TRX crushed competitors with its 0-60 mph time, clocking in at just 3.9 seconds. The speed surprised even Ram which estimated that the TRX would do 0-60 mph in 4.5 seconds. The Ram TRX is the first production pickup to break the 4 second mark. When it debuted, Ram executives promised that the TRX would smoke the competition, and they weren’t kidding.

Truck fans have been waiting for this huge horsepower truck since the TRX was shown as a concept in 2016. Ram promised that the 2021 Ram TRX would be the fastest and most powerful mass-produced truck on the market. The 6.2-liter supercharged HEMI V-8 delivers 702-horsepower and 650 lb.-ft. of torque. The TRX’s frame uses high-strength steel to improve durability and stability both on and off-road. The HEMI V-8 is mated to an eight-speed TorqueFlite transmission. The TRX sits 2” higher than other Ram trucks.

The 2021 Ram 1500 TRX was just voted Motor Trend’s Truck of the Year. When the honor was announced, TorqueNews Managing Editor Patrick Rall wrote “The Ram 1500 TRX is the greatest off-road performance truck ever and this morning, it was named the best truck of 2021 by Motor Trend. To claim the 2021 Motor Trend Truck of the Year, the TRX beat seven other popular pickups to claim the title, but to anyone who has been fortunate enough to drive the Hellcat-powered Ram, this comes as no surprise. It might be a niche model, but it is incredible on the road and off, making it a deserving winner of this prized title.”

The Ram TRX will be facing off against another popular FCA model, the Jeep Gladiator Mojave. The midsize Gladiator has been a media darling and the Mojave version debuted a new rating for Jeep. The new Jeep Gladiator Mojave is the first to be ‘Desert Rated’. Jeep says the new badge indicates that the vehicles “represent the ultimate in high-speed off-road capability and performance in grueling desert and sand environments.”

“4x4 capability has always been the foremost pillar of the Jeep brand and the new Gladiator Mojave is a natural extension of our legendary Trail Rated 4x4 capability leadership,” said Jim Morrison, Head of Jeep Brand – FCA North America. “Jeep Gladiator is already the most capable midsize pickup on the planet and, with the addition of the new Mojave model, we are delivering our most passionate customers a new level of capability with the ability to master high-speed desert and sand terrains.”

According to Jeep, the Desert Rated badge is an extension of Jeep’s Trail Rated designation. Desert Rated will be reserved for the vehicles that show they are capable of handling off-roading at high speeds while maintaining stability and control, despite the grueling conditions. The Desert Rated 4x4 vehicles will be tested in five categories: Ride Control and Stability, Traction, Ground Clearance, Maneuverability and Desert Prowess. Desert Prowess means the Jeep can withstand the intense heat, sand and gravel, and the ever-present dust that one finds in the desert.

The third contender for the Truck of the Year title is the newly redesigned 2021 Ford F-150. The F-Series has been the most popular vehicle for the last four decades. Ford has been unable to build enough of the best-selling pickup to meet demand. Is the redesign enough to win the truck the title of North American Truck of the year? My colleague Jimmy Dinsmore thinks that it is. Read why here.

Final voting will take place Jan. 2-4, 2021, and the 2021 NACTOY Car, Truck and Utility of the Year winners will be announced on January 11. It used to be that the awards were announced on the first day of the North American International Auto Show in Detroit. COVID has forced the show to delay its dates until September. Details about the new format of NACTOY event will be announced soon.