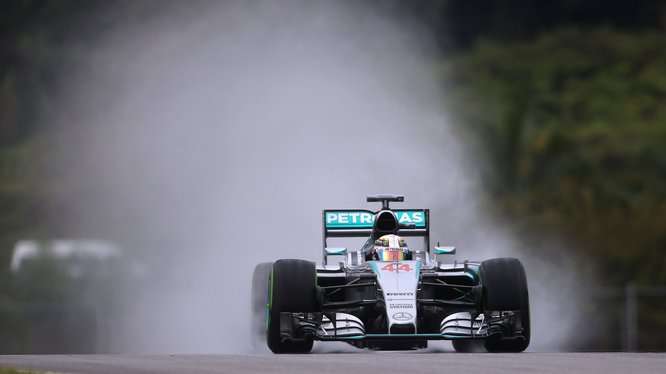 Can Mercedes AMG and Lewis Hamilton Keep Their Streak Alive in Malaysia?

With the weather wreaking havoc this weekend at the Malaysian Grand Prix, Hamilton takes the pole, but a familiar face was in the rear view mirror.
Advertisement

Defending Formula One Champion, Lewis Hamilton was able to pull off a quick time in his first flying lap early in Q3, but the four-time Formula One champion Sebastian Vettel in his Scuderia Ferrari was hot on his heels. Hamilton managed to pull off the qualifying lap early in the final qualifying heat, edging out Vettel by just 0.074 seconds to claim his second pole in as many races. Hamilton’s Mercedes teammate, Nico Rosberg, 0.465 seconds behind, will start third. The Red Bull teammates of Daniel Ricciardo and Daniil Kvyat will round out the top five respectively.

As is often the case, weather has been a major factor at the 2015 Malaysian Grand Prix and could prove to be an issue for Sunday’s race as well. Today’s qualifying session was delayed by torrential rains, which played right into the hands of Hamilton, long known as one of the best wet weather drivers on the Formula One circuit. The race day forecast calls for much of the same with temperatures in the lower 90’s, humidity around 75 percent and scattered showers throughout much of the day. The wide-ranging weather conditions and often rough surface found at Sepang have prompted tire supplier, Pirelli, to designate its medium and hard compound tires for the competition.

Having won the opening Australian Grand Prix, Hamilton and his Mercedes AMG team, will look to continue their hot streak in Kuala Lumpur, having won seven of the last eight races dating back to the Italian Grand Prix in 2014. Hamilton’s only loss since last September came in the 2014 penultimate race in Brazil to teammate Nico Rosberg. Should a Mercedes AMG Petronas take the checkered flag tomorrow, it would give them victories in 18 of the last 21 races and another great start to the prized Constructor’s Championship that they hope to defend in the 2015 season.

Sebastian Vettel and Ferrari will be eager to announce his presence tomorrow, having left Red Bull in the off-season, where he had won all four of his World Championships. With the emergence of Daniel Ricciardo and his three grand prix victories in 2014, Vettel made the controversial move to Maranello with hopes to put another World Championship on his resume. His third place podium finish at the 2015 Australian Grand Prix proved he can be a contender, but the big question is, can the Ferrari of Vettel overcome the recent domination of Mercedes AMG teammates, Hamilton and Rosberg?

Another great story coming out of this weekend’s qualifying at Sepang was 17 year-old Max Verstappen, who will start sixth on the grid. It is the best starting position for a teenager since 1961. The fledgling talent seems to have a knack for difficult driving conditions and showed why Red Bull and the Toro Rosso team thinks so highly of the youngster. If Mother Nature is so inclined, look for Verstappen to have a good day if conditions get tricky.
Live coverage of the Formula One Malaysian Grand Prix can be seen on NBC Sports at 2:30am Eastern Time with an encore presentation at 3:30pm.