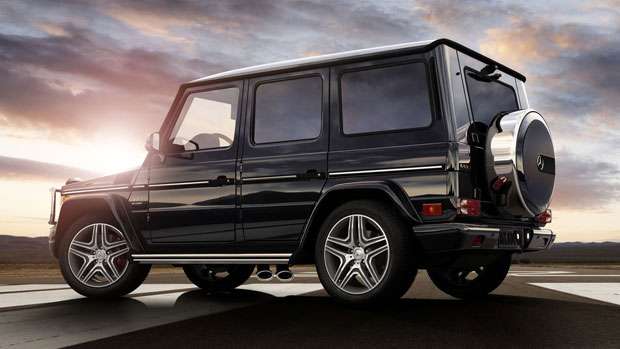 Who doesn't want an AMG V12 biturbo? How about a V12 biturbo in a G-wagon? Well, ready or not, it's coming to America.
Advertisement

Do you have $218,000 burning a hole in your pocket? If so, the 2016 Mercedes AMG G65 might be just the solution. The gents in Affalterbach are sending the G65 across the pond with the outrageous twin-turbo V12 engine. How can you go wrong with 621 horsepower and a monstrous 738lb-ft of torque?

While it won’t hit our shores until November, Mercedes has just shown off the new G-wagon at the New York Auto Show. If the 536 horsepower of the pedestrian AMG G63 isn’t good enough, you can upgrade to the 621hp version for only $80,000 more. That is a hefty jump and other than the extra 85 horses under the hood, Mercedes isn’t saying much about what that extra 80 grand will get you.

The styling, which hasn’t changed much in decades, is still the boxy SUV that was first introduced in the late ‘70’s. While the U.S. didn’t see its first G-class model until 2002, it was still based off of the 1979 SUV built in Austria. You will still get the signature AMG throaty exhaust that exits on both sides of the rear passenger doors and elegant AMG sporty wheels which will be unique to the G65, but the question still remains where your extra cash will be going towards other than the engine.

With minor aesthetic changes, the 2016 AMG G65 will get you to 60 in 5.3 seconds. While not as fast as you might think with a SUV having such prodigious power, the G is far from a lightweight. Curb weight will probably be close to 6,000lbs when loaded up with all the amenities and you can guarantee the list will be long. The beast of an engine will be coupled to a 7-speed automatic transmission and have three differential locks with definite off-road capability with its raised suspension.

If you are in the market for a quick SUV that can provide access to just about anywhere, the G65 may be your pick, provided you were looking to spend well over $200 grand. With 3,090 G-class units sold in the U.S. and more than half being AMG G63’s, Mercedes is hoping that the trend continues with the G65. Start saving your pennies, you are going to need every one of them.