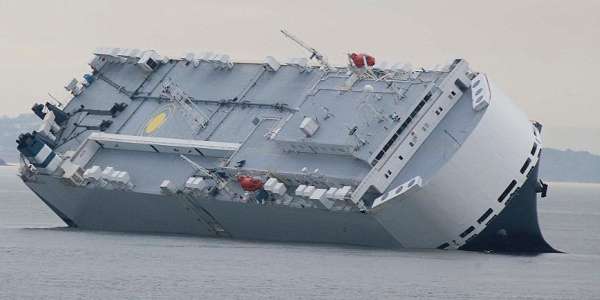 A huge transport ship was deliberately run aground while carrying new Jaguars and Land Rovers in an attempt to save both the crew and its precious cargo. Could it be one of the most expensive ship wrecks in history?
Advertisement

The German shipment of approximately 1400 Jaguar F-Types and Land Rovers (and one Rolls-Royce Wraith) has been stalled just a bit due to being stuck at sea. According to news sources, the Hoegh Osaka was in route to Germany carrying heavy equipment as well as thousands of new luxury vehicles. The ship, a 57,000 ton cargo vessel, is approximately 590 feet long. The ship began listing (the angle at which a vessel leans or tilts) and most likely would have capsized if the crew had not acted quickly and safely ran the ship aground.

It is now resting partially on its side on a sandbar near the British port of Southampton in the UK. All 25 of the crew members were safely rescued by a coastguard helicopter and a few lifeboats at about 9:00 pm on January 4, 2015. Steve Carson (National Maritime Operation Center Commander) said “All of the crew has been accounted for and other than a couple of non-life-threatening injuries, everyone is safe and well.”

Shortly after the ship left its port the cargo ship began listing as much as 45 degrees. The pilot and the crew made the decision to try and save the ship by grounding her on the bank and by doing so may have just saved the future owners of all those Jaguars and Land Rovers.

I have heard some crazy excuses as to why a car that has been ordered has not arrived yet, but can you imagine the salesman telling you that the cargo vessel delivering your car has shipwrecked? The Rolls-Royce alone has an estimated value of $375,000 and I would hate to be the one who has to tell this owner he or she will have to wait a few days longer to get their new vehicle.

Details of the exact plans of the car rescue have not been released yet, but experts say it may take days to complete this very difficult task of saving both the ship and the luxury cars aboard. Another report suggests that a forecast of bad weather could also add to the difficulty of the rescue operations.

Early estimates have put a total value of the vehicles being transported at $45 million and there is no word on the wellbeing of the vehicles. With the ship listing at those extreme angles there are rumors that many of the cars may be damaged. Jaguar Land Rover (JLR) has made no official statement yet, but we can speculate that there may be some customers waiting for their vehicles that will not be happy.