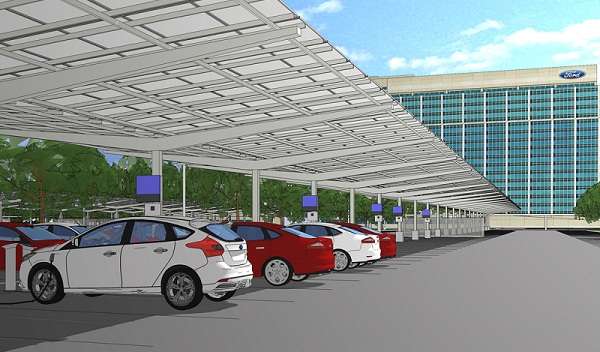 Not to be outdone by GM, Ford unveils plans for massive solar canopy for EV charging

GM has backed up its stated commitment to electric vehicles by leading the industry in workplace charging, particularly the solar-powered variety. Ford has responded with plans for a solar canopy of epic proportions, partly to charge its own electric vehicles.
Advertisement

Ford has announced a project to charge electric vehicles with solar power on a truly impressive scale. Okay, so not all of the megawatts – okay, megawatt – will be devoted to EV charging. Nevertheless, it makes quite a statement about the company’s oft-proclaimed “commitment to sustainability.”

In May we reported on GM and their 401 workplace charging stations at various U.S. locations, 20% of which are powered by solar canopies. At the time, we called on other automakers to follow their lead; it appears Ford was listening.

The largest solar array in Michigan

Ford’s massive solar array will provide cover for 360 parking spaces at the company’s world headquarters in Dearborn. DTE Energy will fund the project and is responsible for the installation and operation of the carport, which will be a $5 million project due to be completed early next year.

The array will generate 1.038 megawatts of electricity, second among solar carports in the Midwest only to the 1.1-megawatt installation at the Cincinatti Zoo. Ford says it will generate 1.13 million kilowatt-hours annually, which is enough to power 158 average-sized homes.

Most of the electricity will go to Ford’s offices, but the rest will be diverted to 30 charging stations for electric vehicles. Count on seeing a lot of Fusion Energis and C-Max Energis, and maybe even a Focus Electric or two.

“Ford has a long history of innovation and a deep commitment to sustainability. Our fundamental purpose as a company is to make people’s lives better,” said Bill Ford, executive chairman at Ford. “We do that by creating outstanding products, by investing in communities where our employees live and work, and by using technology to tackle global sustainability challenges. Those beliefs are embodied in this project.”

Ford loves to boast about its commitment to sustainability, but the company does its part to back it up. The planned solar canopy will offset an estimated 794 metric tons of carbon dioxide annually, and perhaps more importantly will put the spotlight on solar power and plug-in vehicles at its highly visible headquarters.

Of note is that a project this large doesn’t need energy storage in the form of batteries for the electric vehicle chargers, as their power draw at any given time will be negligible compared to the total output of the system.

We say good on you, Ford. Who is next? Do I hear Chrysler proclaiming its devotion to solar power and electric vehicles?

John Goreham wrote on August 15, 2014 - 7:41pm Permalink
Patrick Rall told me that indeed Chrysler is working on a Hellcat solar array that will produce 7 more kWh than either Ford or GM.
Charlotte Omoto wrote on August 21, 2014 - 9:56pm Permalink
I wonder why Tesla doesn't have solar panels in its Fremont factory parking lot.