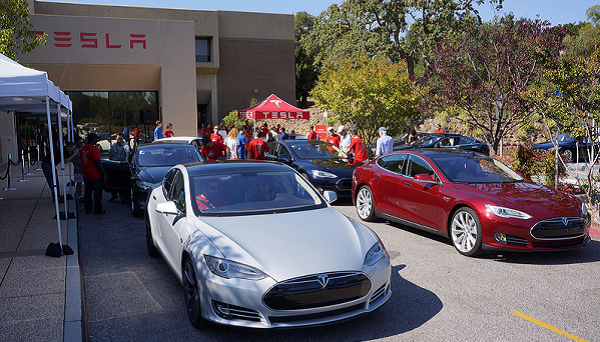 Tesla Motors CEO Elon Musk is always one to think big and talk big. He usually delivers, too, which is what makes a couple of his comments from Thursday’s conference call so interesting.
Advertisement

Following the forays of established automakers into the electric vehicle industry, with the possible exception of BMW, is largely unexciting. New developments are occurring all the time, of course, but for some reason the auto industry’s big players don’t inspire much great hope that electric vehicles will make a significant dent on overall sales anytime soon.

Then there is Tesla Motors. Whenever news in the larger electric vehicle industry is uninspiring, Tesla always remains a beacon of hope for the future. No automaker in the electric vehicle sector has the ambition or vision of Tesla, and most don’t execute their EV plans as well as Elon Musk’s crew.

Much of that ambition, vision, and execution is a reflection of the company’s leader. Musk has an irrepressible drive and enthusiasm for ridding the transportation sector of carbon-based energy sources and an intellect that few (if any) auto executives can match. He is also well-known for his perfectionism, on display with the delayed launch of Model X in part because Musk’s need for perfection is so hard to satisfy.

Does Tesla have a future ace in the hole?

In Thursday’s conference call after the release of Tesla’s quarterly earnings, Musk put forth the expected rhetoric concerning the Gigafactory, launch of Model X, inferiority of hydrogen fuel cells, etc. But a couple comments in particular stood out to attentive observers.

Of course, this isn’t necessarily an indication that Tesla is planning something epic. But it is a comment that cannot be ignored coming from Musk; Tesla has never been shy about revealing even its boldest future plans, so the implication that the company has something up its sleeve could be an important one.

It could be related to ultra-fast charging technology, stationary energy storage, autonomy, or other advancements in batteries or supercapacitors. It could amount to nothing of consequence. It could be anything, really. With Musk and Tesla on a different level than the other automakers, nothing is off-limits; that is what makes comments like these intriguing to those following the EV industry.

With electric vehicles, battery costs are the biggest obstacle in terms of cost. To bring EVs on par with legacy gasoline vehicles, conventional wisdom suggest battery costs will need to fall below $200/kWh. With Tesla’s Gigafactory and the expected resulting 30% cost reduction, the company will likely reach that mark in 2017 – this will allow the Model III to legitimately compete in price with vehicles such as the BMW 3-series.

Last week, though, Musk indicated that $200/kWh is by no means the ceiling (or floor, as it were.) The CEO said in the conference call that he would be “disappointed if it took us ten years to get to a $100/kWh pack.”

The implications of $100/kWh batteries are phenomenal. Not only would electric vehicles be cost-competitive with gasoline counterparts, the stationary storage industry would explode in support of solar and wind power. Time will tell if other automakers are capable of reaching this number, but I wouldn’t bet against Musk.

Another comment by CTO J.B. Straubel provided confirmation that Model III, due to launch in parallel with the Gigafactory in 2017, will achieve 200 miles of range for a price tag in the mid-$30,000s in part due to improved battery technology.

“The cathode and anode materials themselves are next generation, so I mean we’re seeing improvements in the maybe 10% to 15% range on the chemistry itself,” said Straubel in reference to the improved energy density of the cells to be used in Model III packs.

This improvement is in line with the broad trend in lithium-ion battery technology of incremental improvements – it should have been expected that the next generation battery, launching five years after the original Model S pack, would offer superior energy density.

A Model S fitted with a 60-kWh next-generation pack with this improved energy density would theoretically achieve 230-240 miles of range compared to the current 208 miles. It also means that Tesla will be able to use a smaller pack to achieve the targeted 200 miles of range for Model III, allowing the price to drop into the “attainable” range.

It will be some time before we will know if these statements made by Musk will amount to anything significant. Vague comments about a company’s future potential can be made simply to give the illusion of innovation and appease investors, but that isn’t Musk’s style. Tesla still has a few tricks up its sleeve, and it will be fun to watch as they are revealed in the coming years.

John Goreham wrote on August 4, 2014 - 11:29am Permalink
Good upbeat story. I hope there is some big news from Tesla soon about actual sales. In the US the Model S is now fourth in sales and the Tesla brand fifth in EV sales. According to Inside EVs, Nissan sold (or leased) literally 6 times more EVs in July in the US than did Tesla. The Tesla Model S sales in the US are now well behind last year and July (500 units according to InsideEvs) was the company's worst US sales month since December 2012. There is much to look forward to with Tesla, but right now the company is barely even in the game in the US EV market.
Weapon wrote on August 5, 2014 - 12:42am Permalink
That is not a fair assessment and you know it. Not only is Tesla supply constraint sending cars to other countries, in July Tesla had a factory shutdown to upgrade the factory.
John Goreham wrote on August 5, 2014 - 1:39pm Permalink
Fair point. So how did Tesla rank in July and year to date in overall global electrified vehicle sales compared to Nissan, GM, Toyota, and Ford? Nissan's US sales alone beat's all of Tesla's global sales. A quick look at the US numbers for Toyota, GM, and Ford shows they have to sell a couple thousand globally, for what I said about Tesla in the US - that they are 4rth or 5t- to also be true globally. Luke's story is valid, there is much to look forward to. As you pointed out, Tesla couldn't build any cars - at all - for about two of the past 4 weeks. All manufacturers have down time.
mike w wrote on August 4, 2014 - 7:31pm Permalink
U.S. sales of the Model S have taken a hit at the expense of growth in Asia and Europe. Its a lot easier to lease a car at $225 a month than sell one for $100,000. In my book Tesla is still leading the charge in the EV world even though Nissan has leased more of their primitive LEAF.
Heikki Suonsivu wrote on August 5, 2014 - 10:39am Permalink
Nissan has reached a much more important milestone, not yet reached by any other EV manufacturer with any notable volumes. They are on black, making profit out of their EVs, including having paid off the initial investment into developing the Leaf. This is The Measurement of viability of the EV. I agree that Tesla S is pretty massive achievement and way ahead of anything else on the market, as they took multiple leaps in one go, with a goal of making best car on the market. Well, maybe a few improvements are still needed, the S back door entry is cramped and road noise penetrates more than best cars on the market. The Leaf is an example how a major car company can take a more traditional approach by using existing knowledge, putting in a well-designed electric drivetrain and throwing in their best gadgetry. Obviously Nissan's gadgetry bin did not include 17 inch touchscreen, so it looks plain and basic compared to S. The nav and other stuff came from the same parts bin as their gasoline cars. That was the compromise they had to make to include A(ffordable) into their car, combined with P(rofit). For anyone comparing to a gasoline car in same category, Leaf is still an improvement in any other respect than range and price (without subsidy). Now, the next fight likely will be affordable range, as otherwise the cars will be somewhat similar. My bet is that Tesla will not be alone with 200+ mile range when model III comes out in 2016 or whatever they promise. That will the challenge for Tesla. Nissan leads in volume, and are already in the second generation of Leaf, and make profit. To me, Nissan's strategy has been pretty spot-on for what they wanted to achieve. Tesla's best car, not just best EV is the only strategy they can actually be successful with. Being just good car, prefect EV is enough enough. Just replacing the drivetrain is something a traditional car company can do too easily, and then crush the competitors simply by their massive loyal customer base and volume, so being average on other than EV bits is not viable option. There are large mass of people who are brand-loyal and will buy EV when VW, Volvo, or Mercedes comes to the market with their version. VW e-Golf and e-Up seem to grab good shares almost immediately they start sales in a market, for example. Tesla has to keep ahead in more than just drivetrain, and the further they get into that territory, the more even the playing ground will be. They still have the advantage of not gragging a great history and board full of stiff old people who think they know how cars have always been made and so they will be made in future.
janius wrote on August 5, 2014 - 11:19am Permalink
John Goreman, you are comparing potatos to oranges. The Model S a luxury sports sedan priced around $100k. It is the same if you compare sales of Panamera is low when compared to a (garbage) Ford Focus. Sales in the US decreased because more cars were shipped overseas.