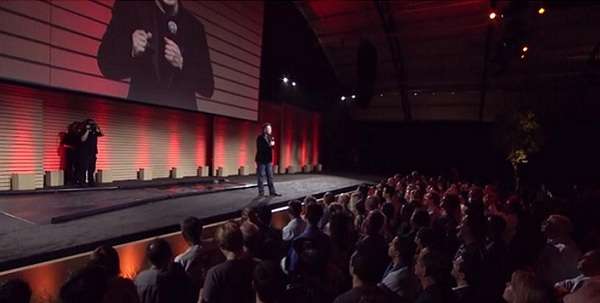 Proponents of battery swapping once touted it as the ideal replacement for gas stations. A year ago Tesla put on a flashy demonstration of battery swap capability, and has scarcely mentioned it since. Here’s why.
Advertisement

Ask any electric vehicle industry insider or even casual observer about the biggest obstacle to mass adoption of EVs, and chances are the phrase “limited range” will work its way into the answer. Battery swapping held great promise as the silver bullet solution that would solve range anxiety once and for all. But now the idea has effectively died, in part because Tesla no longer seems interested.

Better Place was the champion of battery swapping. The company collected heaps of investors and generated a great deal of enthusiasm surrounding its business model: deploy a massive network of automated battery swap stations where EV drivers could pull in and exchange a depleted battery for a fresh, fully charged pack within mere minutes.

Range anxiety? Gone forever. The cost to the driver? Minimal, as battery cost would be effectively amortized over the life of the car. Better Place and its ambitious founder Shai Agassi had set out to change the world.

Fast forward to June 2013. Better Place has crashed and burned in spectacular fashion through a combination of many factors, which can be read about in great and riveting detail on Fast Company.

But now Elon Musk, the world’s greatest entrepreneur, is presiding over a grandiose presentation of a Tesla Model S very capable of swapping its battery in just 90 seconds. Tesla promised to roll out swap stations across the country as part of its Supercharger network. There was a glimmer of hope for battery swapping.

It has been over a year since that presentation, and still no Tesla battery swapping. Inside EVs reports that now Tesla is working on its first battery swap location targeted for the end of the third quarter, likely to be a prototype unit at the Harris Ranch Supercharger station in California. Said Tesla VP of corporate development Diarmuid O’Connell:

“We still believe that there are some interesting applications for swap and this first site will be a demonstration...we’ve talked about swap in various contexts. You can imagine scenarios where a fleet operator is working with swap in a depot system, where vehicles return from and to a particular location regularly.”

That sounds a lot to us like Tesla has no plans for widespread battery swap for private consumer use unless something really drastic happens. As O’Connell pointed out, the company has “diverted most of our team and resources” to expanding the Supercharger network, and rolling out costly battery swap stations is simply not a high priority.

Too costly, too complex, too little incentive

At present it is simply too difficult and expensive to deploy battery swapping on a large scale. For one thing, the swap stations will cost a great deal more than your typical Supercharger that already runs up to $300,000. Automation is the most likely solution for battery swap stations, and the machinery required to handle heavy battery packs and make delicate connections would not come cheap.

Companies simply don’t have the capital to roll out significant numbers of these stations.

And as Green Car Reports wisely pointed out, automakers like to have their own battery technology that makes universal swap highly unlikely. Tesla making its patents available to competitors may change the dynamic eventually, but for now the hope of standardized battery cell and pack design across the industry is almost laughable. The battery is the most important piece of an electric vehicle, and each vehicle adapts itself to the pack’s characteristics (think the Chevrolet Volt T-shape, or the Tesla floorboard style).

In addition, electric vehicles as designed today cannot simply have the packs removed in a short period of time. Tesla was able to do it with their pack as it essentially comprises the bottom of the vehicle, but they left unanswered how the complex connections of electronics and particularly liquid coolant plumbing could be disconnected and reconnected (the Better Place Renault vehicles had air-cooled packs). The location of packs in other electric vehicles make swap even more difficult. Battery swap capability must be engineered in from the start.

Another factor contributing to Tesla’s disinterest in battery swap is that the California Air Resources Board plans to eliminate the zero emission credits that would have been offered for each “fast refueling” battery swap station. Though not the only reason to pursue battery swapping, the lack of credits certainly put a damper on the business case.

The impact of DC fast charging

Finally, battery swap has met its most potent enemy in DC fast charging. A far less expensive option, fast charging enables batteries to be refilled at ever-increasing rates – Tesla Superchargers can deliver power at 120 kW, enough to replenish 170 miles of range in a half hour, and the company plans to increase this rate further in the ultimate pursuit of sub-5 minute charge times. The ultimate goal is to derive the necessary power from batteries storing electricity from wind and solar sources so as to minimize grid impact.

For the foreseeable future, DC fast charging seems to have won the day over battery swapping. We will see Tesla battery swap stations sometime in the future, but the company is far more invested in widespread deployment of its Superchargers and the improvement of their charge times. In the end, Tesla may not need battery swapping at all.

Ray wrote on June 26, 2014 - 12:11pm Permalink
It is important to understand the larger picture which we all assume is part of Tesla's bigger plan. By having Solar City as another internal organization, Musk has effectively developed a second life business model for all cells within the Tesla vehicles. Long term testing at UCSD shows that automotive 18650 cells can deliver value for more than a year after they have reached their traditional cycle life within a car. The cells work perfectly for collecting and storing power from solar and wind to drive commercial lighting projects such as multi-level parking garages and street lights. The ability to amortize the cost of a cell multiple times will be a significant way to reduce the overall cost of the Kw. Tesla is not alone in looking at this business model. Many companies involved in delivering high energy discharge cells are looking into alternative second life outlets for cells that have reached the 80% capacity mark. Think of secondary markets where the debate over using SLA vs Lithium can be eliminated because pricing is the same. Autonomous street lighting, commercial ups even residential grid storage can benefit from this model.
Bert Bigelow wrote on June 28, 2014 - 12:28am Permalink
Another problem that Tesla must address...fast charging degrades battery life. I haven't seen any specs from Tesla on how much battery life is lost with frequent Supercharging. The dual carbon cell that the Japanese are working on is supposed to be much more tolerant of fast charge and discharge rates. That would solve the problem, if it makes it to the market.
Chris Vaughn wrote on June 30, 2014 - 2:34pm Permalink
Battery swap was a scam to get more tax credits and Musk got away with it. From a practical perspective, the idea was pretty absurd. Transporting these gigantic units around the landscape and trying to predict where they would be needed most would be next to impossible. There aren't enough Tesla's out there to derive a reasonable data set to base the inventory needs on. One week a swap station might get a bunch of cars, the next maybe none at all. I know I would be pissed if I went out of my way to get a swap and there were no batteries available. Not to mention do you really want a bunch of minimum wage idiots tinkering with the power plant under your $70,000 car? What happens when they screw up and the car doesn't start? Gassing up an IC car is available anywhere, it is quick and it is easy. EV's can't match that.
Mavi57 wrote on October 9, 2014 - 2:57am Permalink
Not to mention do you really want a bunch of minimum wage idiots tinkering with the power plant under your $70,000 car? This is what they call social racism. But don't be afraid the process is completely automated.