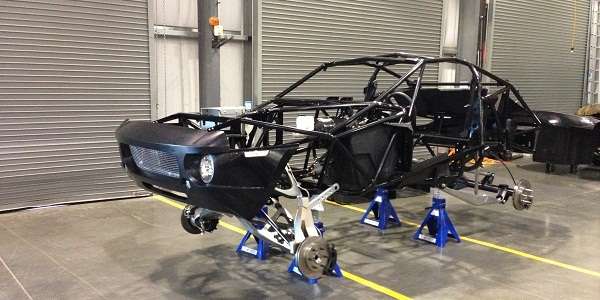 Local Motors wants to revolutionize the way cars are built

Local Motors is the most interesting automotive company you’ve never heard of. This September they are going to build an electric car using a 3D printer at the International Manufacturing Technology Show.
Advertisement

Cars have pretty much been built the same way since Henry Ford introduced the assembly line to the automotive industry in 1913. Local Motors, a small company based on the ideas of the community, is doing its best to change that.

Their existing business model revolves around “microfactories” where consumers come to literally build their own car (with the help of Local Motors technicians and manuals, of course). It is not a model designed to produce millions of cars per year, but it has worked well in low volumes and customers seem to love it. The designs for their products come from the community; designers, engineers, and enthusiasts upload ideas and designs for review and the best are chosen to become reality with customer input.

The company currently has one flagship vehicle, the mean-looking Rally Fighter. But their impact on the automotive industry isn’t through vehicle sales. This September, Local Motors will use a 3D printer to “manufacture” an electric vehicle on the show floor at the International Manufacturing Technology Show in Chicago from September 8-13. It will use a machine developed by Oak Ridge National Laboratory that produces parts by addition (like a typical 3D printer) and subtraction (like a machine tool). The vehicle is still to be determined, but will be “purpose-built for the urban transportation needs of Chicago” according to a Local Motors press release.

Some see 3D printing as the future of manufacturing, and it could become very relevant in the mainstream auto industry. If Local Motors is successful, it will demonstrate that cars can be printed rather than stamped and welded. This likely will not change how mass-production cars are manufactured, but could have a great impact on how they are designed.

The advantage of 3D printing is rapid prototyping, or the ability to make and implement changes to a design quickly and speed up the design process. The new method of 3D printing that will be shown by Local Motors at the IMTS could be a glimpse into what automotive design will look like within a few years; allowing for virtually unlimited complexity and possibilities, new models could arise within weeks or months rather than years. Though established automakers may be slow to integrate this radical new technology, Local Motors plans to demonstrate its potential and show the big shots of the auto industry what a small start-up is capable of.

Raymond Max wrote on March 19, 2014 - 1:26pm Permalink
Wow! I'm confident that with your engineering background in tow, you know that the probability of Local Motor's business plan gaining traction is most improbable. I would appreciate a bit of expansion on your behalf as to the limitation of so-called 3D printer " building." Think of it as a software driven plastic extruder on steroids. There is no " building" a car with it. An affordable " homebuilt" electric car assembled with the help of qualified automotive technicians? Great bring it on.
Luke Ottaway wrote on March 19, 2014 - 2:13pm Permalink
To be honest, I'm not sure how the 3D printing fits into their existing business model. The microfactory model at least works on a small scale, with customers who really care about their cars. They won't capture the masses with it, but I don't think they necessarily intend to. As for 3D printing, I doubt they will be manufacturing cars with it. Printing a model as a publicity stunt, yes. Using the technique for certain parts in their vehicles, probably. But I think the main takeaway is the impact on design, as I mentioned. It makes prototyping (without production-quality materials) faster and easier, especially changing designs that would otherwise require updated tooling. That is where it could have an effect beyond just what Local Motors does, if they can prove this new ORNL printing technique is effective. Thoughts?
Raymond Max wrote on March 19, 2014 - 3:30pm Permalink
Good day Luke. I'm not sure from a product liability viewpoint how Local Motors(or anyone else for that matter) would escape the implied legal ramifications of self-help-car-manufacturing. This is especially problematic for a hands-on engineer of record.I know of no way to insure the concept other`than perhaps a "cooperative" limited liability ( signed waiver) venture. While I like the idea of the cost friendly ( help you build) concept shared here, I'm afraid it will go the way of the once very popular` kit car industry. Meyer's Manx, etc. Thanks for sharing.