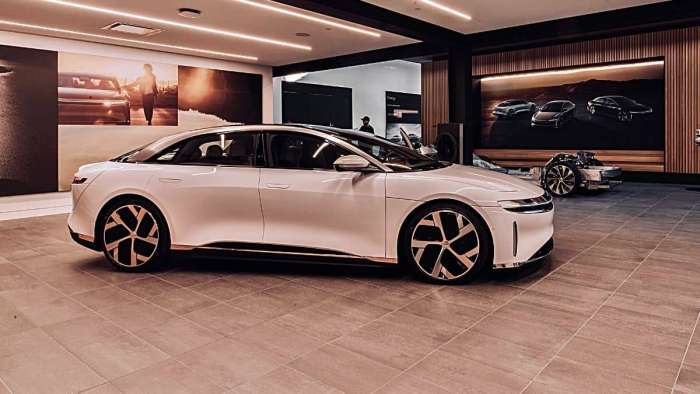 Lucid Motors Stock Had an Exceptional Day, Plus Expansion Update

Lucid Motors' stock LCID had a great day, Lucid Motors is expanding at a Rapid Rate, Everything Investors need to know heading into a presumably volatile next week!
Advertisement

Why did Lucid's Stock rocket going into the weekend? Here is what investors need to know?

Lucid Motors saw some very large institutional investing on Friday, which resulted in Lucid’s stock increasing nearly 10%. If we look at Thursday's trading session for Lucid, we will see a very volatile stock that saw Lucid drop 7% and then come all the way back up finishing positive for the day. $LCID did not stop there, on Friday we saw a ton of Unusual Options Activity from a plethora of trading data services.

We saw an abnormal amount of call options during Friday's trading session, suggesting that this may just be the beginning of the $LCID run. The first large option call I saw was a $48 call with an expiration of 1-14-2022. The next unusual option was a $50 call with an expiration of 1-14-2022. These calls indicate that traders believe that next week will be a very volatile one, which is also why there was a $40 put option for 1-14-2022 as well.

Short interest in Lucid is still at a large number and there are still zero shares available to short, which I mentioned in one of my previous articles Lucid Motors' Secret Weapon and Tesla's Mistakes .

What's Next For Lucid Motors

Lucid Motors has been ramping up production at their Arizona factory which is where their Lucid Airs are being produced and delivered from. Lucid Motors has also been very active on their Twitter account even posting a little preview of what's to come with Delivery numbers with a post that said, “Efficiency Delivered” $LCID shareholders hope to see this as a sign that Lucid Motors is confident that they exceeded their 2021 Quarter 4 delivery numbers.

@JC_EVs shared an email regarding a Lucid update on an expansion to the new Ontario Studio Location. This is very exciting to see that Lucid Motors is starting to ramp up their expansion all over the world. We saw a tweet from Lucid Motors main account saying that Lucid plans on expanding to Europe in 2022 and we know that Lucid is looking to expand to the Middle East and to Asia in 2022-2024.

Lucid Motors is on a tremendous trajectory and that money they received from that Convertible Note, looks to be helping Lucid expedite their plans.

Expansion Update for the Lucid Motors Ontario Studio Location: Second Location is coming to Yorkdale Center in later February! Thanks to @paulynegbe for informing me about this! @JC_EVs Thanks for sharing! https://t.co/9dcTqhsJyS

Lucid Motors could possibly short squeeze sooner rather than later. Since there were a ton of bullish call options for January 14th and beyond, we could see many short positions being covered before the long-awaited Q4 delivery numbers. Lucid Motors is significantly undervalued and this could be a great time to invest into this company that is coming off some very volatile months of trading. However, we could push up to $50 and beyond very soon. This would be very bad for short sellers and may even cause Lucid to jump to new all time highs very soon.

I am excited to see what Lucid is trading at the end of 2022, but as of right now, if you buy $LCID at these prices your portfolio will greatly thank you. If you want to learn more about Lucid Motors and their management team check out my next article Lucid's Talent Takeover