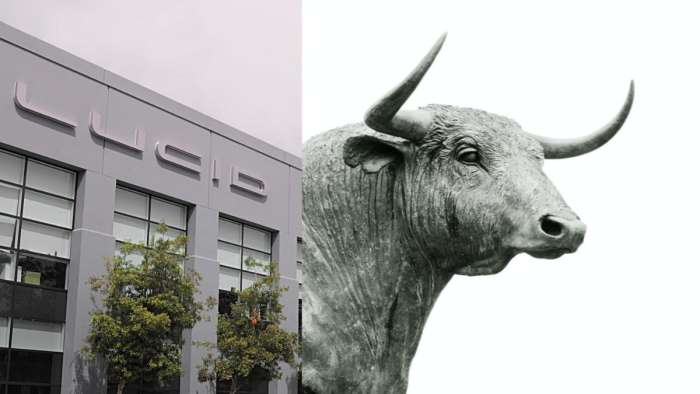 Here is What Can Reverse Lucid Motors Stock Crash

Lucid Motors has been continuing to expand the AMP Factory, increasing production on a daily basis and has reiterated their expansion plans. However, since January 12th, Lucid Motors stock is down around $20 from $46 to $27. Which is a huge loss of $37 off it's all time high.
Advertisement

So why has Lucid Motors stock been on a downtrend, when their overall growth is on an uptrend?

One part of the puzzle is Tesla’s recent Earning Call.

Tesla reported record profit, over $17 Billion in cash and still has a huge lead on its nearest competitors. Unfortunately, investors of all Electric Vehicle companies were negative after Tesla reported. All 3 of the largest EV players, Lucid, Rivian and Tesla were all down 10% after Tesla's Quarterly Earnings Report. Some analysts were upset by Tesla's inability to have plans for a $25,000 vehicle in the near term, and the fact that the Cybertruck was delayed.

Here is why $TSLA, $RIVN and $LCID were down 10% all in one day: Lucid, Tesla and Rivian Down Over 10% Today: What Happened.

How Lucid could benefit from the $25,000 Tesla Model and Cybertruck delays?

Lucid has long stated that they plan to achieve a cheaper car in the future because of their battery technology and electric motor is cheaper to produce than their competitors motors. Since Lucid does create their entire vehicle inhouse they believe that they are one of the front runners to create a $25,000 vehicle. Lucid and Tesla could achieve a cheaper vehicle then their competition because they manufacture their entire product inhouse.

Furthermore, there are only two Electric Vehicle automotive companies that have achieved this, the two names, Tesla and Lucid. The electric vehicle race is a technological one and the companies that have the best technology will survive and thrive. This is very important for Lucid and they see this as a huge advantage over the competition and any electric vehicle start up that tries to entire this already crowded market.

There are two upcoming catalysts that could jolt $LCID up just as fast as the stock has come down. The first is the 13F that investors should be receiving in a week or two. This will allow investors to know for sure if the the Saudi Arabian Public Investment Fund has bought more shares of Lucid or if they have sold some of their position. As well as, show investors what institutions have been doing with their Lucid shares. Many Lucid accounts like mine on twitter @TheLucidVerse have noticed some institutional investing during these large dips and even before the large dips were starting. The Chairman of the Board of Lucid bought more $LCID very recently, right before the large dips on Thursday and Friday.

The next big catalyst is the Quarter Four delivery numbers. The most likely date for this to be announced is February 21 during Lucid Motors Earnings call. I expect some pretty extreme volatility before the earning call because of how important accomplishing the deliveries for Lucid is in the near term. But the delivery numbers do not change the fact that Lucid is rapidly expanding and even going into European Marketing, Canada and Asia very soon. As well as starting the car sales in the Middle East in 2022. This is a huge year for Lucid, but all indications are pointing to a very successful year for the electric vehicle company.

Lucid Motors stock's massive downtrend will not last long, and for longterm investors this is simply a dip and great buying opportunity. If you have a 6-12 month time horizon, Lucid will definitely be over the $50 range which would indicate an almost 100% profit in a very short period of time. For longer term time horizons, Lucid is bound to reach the $100 mark by the end of 2022. I outlined why here: $LCID to $100 by 2022. Lucid could be back in the mid $30’s next week and Lucid investors would not really be too surprised. I recommend holding, if you have cash on hand that is available, buy the dips and just remember why Lucid Motors is the next large Automotive Giant, as well as Technology and Renewable Energy leader.

If you thought this article was informative and want to learn more about Lucid Motors, check these articles out Here is What Lucid Motors Is Expected to Accomplish By 2027 or Lucid Could Potentially Be Crowned The Maker of The Apple Car.

Anthony Donati focuses on electric vehicles and renewable energy companies. He covers Lucid Motors news at Torque News. Please follow him on Twitter at @TheLucidVerse for daily Lucid Motors news and subscribe to the LucidVerse on YouTube. He has a degree in Business Administration with a concentration in Finance. DISCLAIMER: Anthony is a Lucid Motors (LCID) stock holder.