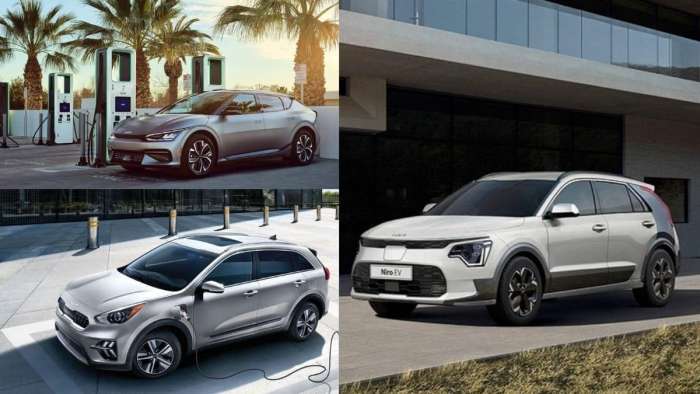 For Kia, overall U.S. sales are down about 5% for the first quarter of 2022. However, there is actually some very positive news in Kia’s first quarter figures that this one statistic doesn’t reveal. Let’s dive into the numbers and compare them a bit to other sales data from competing makers to put things in perspective.
Advertisement

Kia’s good news is that sales of their electrified vehicles are up substantially. The EV6, in only its second month on sale, saw its sales increase by 1,031 units to 3,156, up almost 50% from February for a total of 5,281 in (an incomplete) Q1. This is a good sign that Kia’s EV6 ramp isn’t struggling, so far, in the face of strong global demand and the continued supply chain problems and raw materials shortages plaguing the entire auto industry. Interestingly, if Kia had only been able to sell the EV6 from the start of the year at around the numbers it has sold since early February on, it would have been the second best selling electric crossover in the U.S. for Q1 (behind the Tesla model Y). We will have to wait and see whether or how much Kia can increase sales beyond March’s figures in the coming months.

Comparing these figures to the EV6’s mainstream EV competitors, the Ford Mustang Mach-E, VW ID.4 and Hyundai Ioniq 5 (which really isn’t a competitor so much as a sister vehicle built on the same platform), reveals a close race. Ford sold 2,363 Mach-E in March, and 6,734 in Q1. VW sold 2,755 of its ID.4, for the entire quarter which means VW is falling behind (though if we include Audi in VW’s overall sales, see figures below, the VW group performs a little better). The Hyundai Ioniq 5’s sales were only up slightly from February, for a total of 2,700 according to InsideEVs, and 6,244 total for Q1. One critical detail to call out in the InsideEVs piece reporting on Ford’s sales, is that March production of the Mach-E hit a record (monthly) level of 7,343 units. Thus, it really sounds like we may be looking at a two way race between Kia/Hyundai and Ford in the quarter ahead as the two combined seem like they could still outsell Ford in the near term, at least..

Since GM and Nissan are the two other mainstream (non luxury brand) competitors vying to lead in the transition to EVs, it is probably worth mentioning their EV sales figures for Q1 2022. GM sold an utterly disappointing 457 units (that’s correct, just 3 digits, for the entire quarter) and Nissan, somewhat surprisingly, beat out VW with 4,371 LEAF sales in Q1 (its best Q1 since 2014 in the U.S.). I’d wager a pint that this is due to the lack of options/high demand for EVs in general as LEAF sales have been lackluster in the U.S. for years. I personally know one car shopper that was looking for a 4-door hatchback/small SUV EV last month (in the under $45k price range) and after having no luck finding a Kia, Hyundai or VW EV in stock/available anywhere in the greater Seattle-Tacoma area, ended up with a LEAF that another buyer had rejected on arrival. For reference, and to show just how disappointing GM’s sales are and reference where some European luxury EV producers are these days: Volvo sold 1,658 EVs, Porsche sold 1,925 Taycan EVs and Audi 3,252 EVs in the U.S. in Q1 (all of which soundly crush GM’s figures). Though GM is now returning their Bolt EV model line to production, and will start selling the Cadillac Lyriq soon too, GM is currently not even in the race. If and when they manage to start selling thousands of EVs per quarter again, and can sustain it, that will be a different story.

Another eco-friendly bright spot for Kia is an impressive 114% year over year increase (to 9,226) in Q1 U.S. sales of the Niro. Of course that includes HEV, PHEV and EV Niro models, but it represents strong growth in Kia’s electrified lineup. There’s no breakdown of Kia’s other PHEV, and HEV, model currently on sale, the Sorento PHEV, but combined those are likely only somewhere between single and low double digit percentages of the 17,923 total Q1 Sorento sales. It would be interesting to know if the combined U.S. PHEV sales of Kia and Hyundai might surpass Toyota this year, which sold over 52k PHEV models in 2021. I suspect the answer would most likely be no, if last year’s numbers were to be the same as this year’s. However, we can see that isn’t looking to be the case as Toyota’s PHEV sales numbers are down about 20% so far (and that included PHEV sales from Lexus). Regardless, even if Kia and Hyundai PHEV sales were to surpass Toyota’s, I imagine it would be short lived as Kia (at least) plans to gradually decrease PHEV production starting next year.

This bit of market analysis wouldn’t be complete without mentioning Tesla’s Q1 delivery figures which utterly dominate those of all its rivals. According to Reuters, Tesla delivered over 310,00 EVs in Q1, globally. We don’t have a breakdown for U.S. sales in that figure, but we know from the Reuters piece that the Shanghai plant was responsible for more than half of the total production and that some U.S. production also goes to other countries plus a handful of German made Tesla’s were also delivered in Europe in March. So U.S. sales are likely no more than about 40% of that figure, and I suspect the Model Y was Tesla’s most delivered model in that total. A final note, the Reuters piece mentioned Tesla’s goal to boost their deliveries by 50% this year, with the opening of their two new factories. That sounds incredibly ambitious and I will be surprised if they can actually attain that goal, but we’ll have to wait for at least another quarter to find out. I wish them all the best of luck. Cheers!