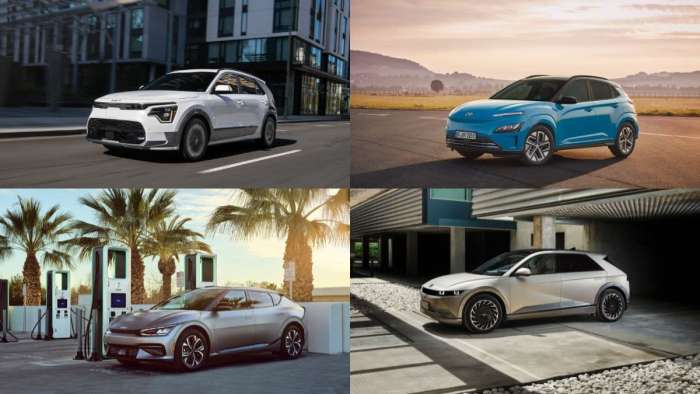 The Hottest EVs On The U.S. Market Are From Hyundai and Kia, Apparently

Bloomberg.com’s U.S. Edition recently declared that the “hottest” electric cars on sale in the U.S. are no longer Teslas. Rather, they suggest that the Hyundai Ioniq 5 and Kia EV6 are the EVs capturing the most attention, lately.
Advertisement

Bloomberg claimed that even Tesla’s famous front man, Elon Musk, has taken notice of Hyundai and Kia’s rapid ascension to the position of 2nd highest volume of EV sales in the U.S. (when the two closely related companies’ U.S. EV sales are combined). Bloomberg also makes a point to clarify that Tesla is still selling a few orders of magnitude more EVs than the dynamic South Korean companies, so this recent “hotness” isn’t purely about sales numbers but rather more about the pace at which Hyundai and Kia are ramping up production, and sales, and the attention their products are getting from mass market auto consumers. According to Bloomberg, it took Tesla 10 years to deliver as many EVs as Kia and Hyundai have in a few months (or closer to a year, but who’s really counting). Regardless of the time it took (which Bloomberg also rightly explains was very different due to the fact that Hyundai and Kia are not start up automakers building companies and product lines from scratch, as Tesla was in that decade), the two South Korean automakers are, together, showing the world just how important it is to bring well designed, brilliantly executed EV models to market. Gone are the days of EVs that looked like catfish or were otherwise made to draw attention to the fact that they were electric. The Hyundai Ioniq 5 and Kia EV6, are just beautifully designed cars that happen to be electric, too.

Kia and Hyundai will likely have sold near 30,000 of these two EV models in the U.S. once full June sales figures are released. Of course Kia also sells another EV, the Niro, and Hyundai the Kona EV, and both sell multiple plug-in hybrid (PHEV) models like the Kia Sportage PHEV, Kia Sorento PHEV, Kia Niro PHEV, Hyundai Santa Fe PHEV, and Hyundai Tuscon PHEV. Tesla as we know sells several times as many EVs as Kia and Hyundai combined, but what matters is that we are finally seeing another company (or closely related companies rather) besides Tesla sell EVs in the U.S. at a volume that resembles mainstream sales figures of equivalent gas powered models. Wait you may say, what about Ford and its Mach-E and F-150 Lightning, or the venerable Chevy Bolt, the Nissan LEAF, or Volkswagen’s ID.4? Well, none of them have sold EVs in the U.S. at the volume Hyundai and Kia look likely to achieve, this year, yet. With the two South Korean companies poised to sell close to 100,000 EVs (or likely more than 100,000 plug-in vehicles if we count their PHEV model sales together), they may beat every other automaker not named Tesla in U.S. EV sales in 2022. Even Toyota, which sold over 52,000 plug-in hybrid models in the U.S. last year, likely cannot match Kia and Hyundai’s numbers this year. That may all change next year or in the coming years of course, but nothing short of miracles or catastrophe is likely to change which brands occupy the top spots this year.

And why should we really care about who’s in second place? I will say this: this competition matters because only when the race is on will the transition away from gasoline powered vehicles begin in earnest. Only then will the volumes of production bring prices down, and increase the pace of innovation necessary to solve the hurdles to adoption, too. When Tesla controls all but a sliver of the market, it isn’t a race. Hyundai and Kia are making it a race, not between them and Tesla, yet, but between them and all the other establishment or mainstream brands. They now have no choice but to compete as best they can and the momentum is going to build rapidly in the industry, likely more quickly than anyone expects.

What do you think? Are Kia and Hyundai the hottest new EV makers around? Please leave your comments or questions below.

Images courtesy of Kia and Hyundai.

Tyler wrote on July 8, 2022 - 5:02pm Permalink
Any idea on USA release of Sportage PHEV? Kia website says July 2022, but no other information to be found and local dealerships claim to know nothing about it.
Justin Hart wrote on July 23, 2022 - 12:59pm Permalink
Great question, and apologies for being slow to respond! As far as I know, Kia has only said "The Sportage PHEV is planned to go on sale in the third quarter of this year and pricing will be announced closer to the vehicle's on-sale date." and I do not see it listed under the electrified vehicle menu on their U.S. website yet either. I would expect Aug or Sept is more likely. My advice is to: 1. check Kia's website/set up a google news search for the Sportage PHEV for daily review. 2. Call your largest volume Kia dealers in the area and ask them if they can notify you as soon as they get word of Sportage PHEVs in transit. I have been able to find news of Kia's EV and PHEV arrivals in the U.S. by following social media for the specific vehicles as well as there are people from all over the country in these groups. Good luck and I hope this helped!