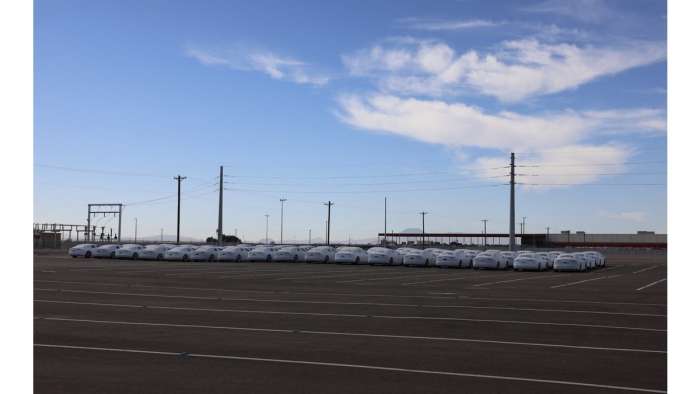 The ability to increase production speed has long been identified as one of the essential elements necessary for Lucid to succeed, and new images published by the upstart automaker seem to confirm that it's doing just that.
Advertisement

Deliveries began with the $169,000 Lucid Air Dream Edition being handed over to customers on at the inaugural Lucid Rally on October 30th. The event, which was hosted at Lucid's HQ in Newark, California, saw roughly 20 Airs handed over to their owners after a complimentary breakfast and presentation ceremony. With drivers in their seats the rally headed off in convoy along a route combining highway cruising with twisty canyon roads, planned by Lucid to highlight the key aspects of the Air's responsive handling and luxurious comfort.

Lucid then released images of the cars being loaded onto enclosed shipping trailers, whereas the first locally-bound cars had been sent out on a traditional open car hauler. It looked as though these Airs would be finding their way to owners further afield, and this turned out to be the case when Lucid began tweeting about deliveries taking place in areas as far apart as Seattle, New York, and Atlanta. The Lucid Air had gone nationwide.

Taking To Twitter
This brings us to Lucid's latest series of shipping and delivery tweets, which were posted yesterday evening. It's always wise to take such news with a pinch of salt, as we don't know exactly when the photographs were taken, but more Airs outside the factory awaiting shipping can only spell good news for Lucid.


Here we see three rows of 17 Airs, 51 total, wearing the distinctive white shipping covers, and then:

Another closed trailer. Looks like this Air at least is heading far out from California.

The third tweet in the series appears to be another angle of the group from the first photo. Again, the cars are parked in three rows, and the electrical transformers in the background look similar to the ones on the left hand side of the first image.

Ramping Up
Hopefully these photos do indeed represent Lucid increasing the speed with which they're able to turn out high quality finished vehicles. Lucid has set itself some lofty production targets, with a goal of 20,000 cars built in 2022 and 90,000 the following year, the company will certainly need to be able to crank Airs out fast enough to meet demand. With 13,000 orders placed in Q3 of 2021 alone, that demand is certainly there. Whether Lucid can meet its targets (which it has so far) remains to be seen. I'll have all the latest Lucid developments here for you daily at Torque News.

Cover image by Lucid Motors licensed under CC BY 2.0.