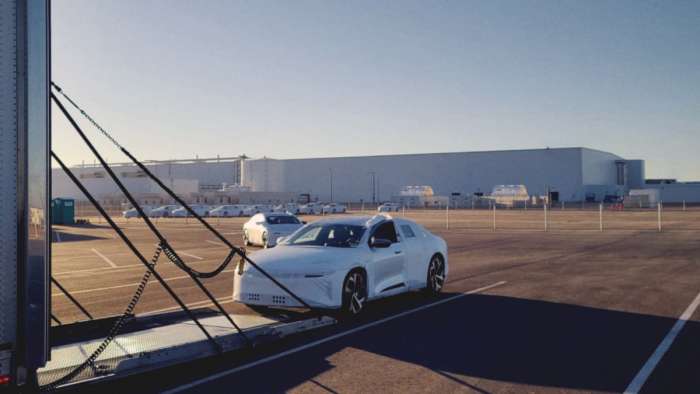 More Lucid Airs Are Being Shipped Out To Customers This Weekend

With two weeks passed since Lucid made its first customer deliveries at the inaugural Lucid Rally the company is gearing up to ship out more Air sedans this weekend.
Advertisement

As this tweet from Bear's Workshop shows, there are at least 22 Air sedans sitting outside Lucid's Casa Grande factory wearing the protective white covers that we saw on the first cars the company shipped out.

Lucid Update - Today we saw 22 cars that were wrapped. Some were moved and taken away since Wednesday. Looks like at least another 4 waiting on the wrap and possibly one more getting charged. We have a full flyover of the perimeter coming out later today on our YouTube channel! pic.twitter.com/p8NUp8L4XC


Further into the distance there are perhaps another four cars waiting for wrapping and potentially another charging in the foreground. It's difficult to see exactly what's going on because the Bear's Workshop drone has to stay outside the gigantic perimeter of the Lucid property in accordance with Lucid's wishes.

The perimeter flyover comes on the heels of two tweets from Lucid that mention more deliveries taking place over the weekend:

Air drop: This weekend, more people join the #LucidOwnersClub in cities across the US. In the meantime, check out some first-drive reactions from our California Dream Rally. #TBT pic.twitter.com/8djJV1MNBz


Outbound Air. The #LucidOwnersClub grows with more Dream Deliveries in locations across the USA this weekend. Stay tuned here for coverage. pic.twitter.com/q3pBcOj6Bg

The first tweet's more of an announcement than anything else, but the second one is interesting for what it says and what it shows. It's deliberately cryptic about where the cars may be headed but we can see that the Air in the image is being loaded into a covered trailer. The initial cars were shipped on a traditional open car hauler, so perhaps these ones are going further afield than the first batch.

It's likely that the second round of Air deliveries will be heading to areas that already have established Lucid Studio and service infrastructure, though we'll find out for sure and relay the information to you at Torque News as soon as we have it. For now all Lucid's saying is "Locations across the USA."

Cover image by Lucid Motors, licensed under CC BY 2.0.

Bear's Workshop wrote on November 12, 2021 - 10:04pm Permalink
One correction on the article. We are permitted to fly within the airspace based on local and national laws. We have spoken to the Casa Grande police and the FAA. They say we are legal to fly. Lucid Motors has sent us a cease and desist letter threatening us with legal action if we fly over the property. We would win easily but can't afford the costs associated with this.

LG's New EV Battery Plant Is a Welcome News for Tesla
Tesla Giga Berlin's New Hurdle: It's Not Only the Gov't, but Now Tesla Itself
END_OF_DOCUMENT_TOKEN_TO_BE_REPLACED