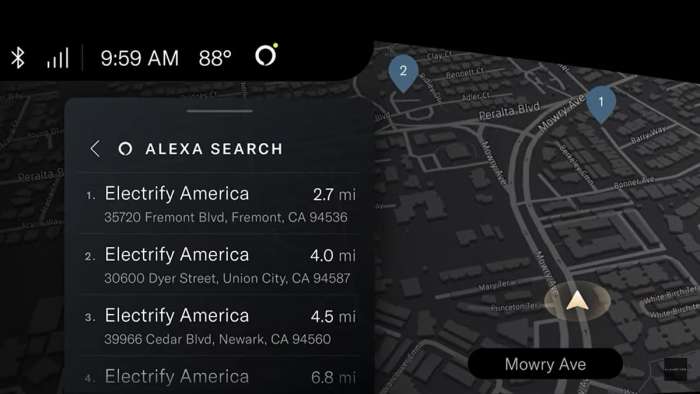 Amazon's voice assistant allows Lucid Air drivers to control a range of functions in their vehicle and home, as this series of short videos demonstrates.
Advertisement

When designing the ways in which drivers and passengers interact with the Lucid Air, special attention was taken to make the vehicle's interfaces, known as Lucid UX, seem cutting edge, even futuristic, while remaining familiar and easy to understand. The inclusion of tactile buttons instead of sequestering every function to a screen is an example of this.

Alexa, Let's Go
To this end, Amazon's Alexa was chosen to handle the Air's voice command system. As you'd expect of a cutting-edge vehicle combined with an extremely well-developed virtual assistant, a considerable number of the vehicle's functions can be controlled by voice alone. Lucid recently released a number of short videos which showcase some of the these functions. We can only assume greater voice command control will follow with over-the-air updates down the road.

While there are tactile buttons on the sides of the seats to adjust position, accessing heating, massage, and bolstering functions would require the use of the lower screen without Alexa's assistance.

The ability to get directions on the fly, especially when driving alone, is something every car should have. Alexa allows Lucid drivers to find charging stations, pull up route information, and set a destination on the Air's innovative twin-screen navigation system.

Perhaps not one of Alexa's most essential functions within the Air, but a nice one all the same, drivers can adjust the cabin's ambient lighting with voice commands.

Removing the distracting task of searching through albums and playlists, Alexa allows drivers and passengers to play music without taking their eyes off the road.

Perhaps the most futuristic of Lucid's current Alexa-controlled functions, this allows drivers with integrated smart houses to turn on lights and heating before they arrive home for the evening.

As cars continue to become more unified with the rest of our electronic devices, it makes a great deal of sense for Lucid to use the well-established Alexa voice assistant to keep hands on the wheel and eyes on the road until the vehicle is able to drive itself.

Speaking of self-driving, Lucid just released its first over-the-air update which is rumored to add functionality to the Air's DreamDrive autonomous system. With an array of 32 cameras and sensors installed on the vehicle the hardware is ready; it's only a matter of time until the software catches up.

Cover image and videos by Lucid Motors licensed by CC BY 2.0.