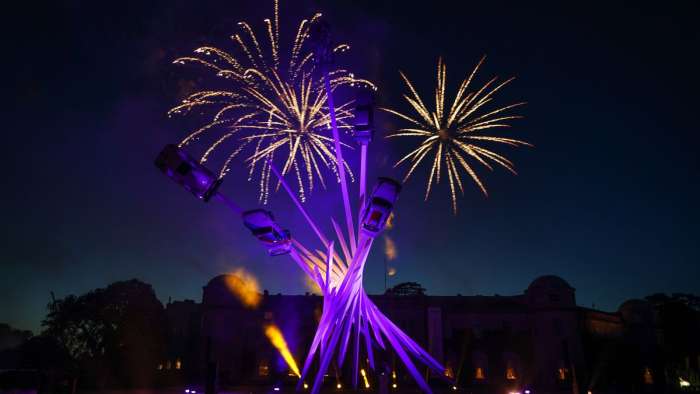 Lucid Air Takes To The Track At Goodwood Festival Of Speed

The Goodwood Festival of Speed is one of the motoring world's finest garden parties with a huge variety of cars and other vehicles tackling its famous hill-climb course each summer. The Lucid Air can now be added to that list as it's been doing some runs up Lord March's driveway with none other than former Top Gear Stig Ben Collins at the wheel. The car will be on display at the Festival's "Electric Avenue" EV exhibition all weekend.


Global Debuts and One Massive Sculpture
Lucid chose the Festival of Speed for the global debut of the Grand Touring Performance due to the sheer number of eyes the event attracts. Taking place over four days each June the event features the aforementioned 1.16-mile hill-climb course, a rally stage, drift demonstrations and a plethora of static displays and car launches. F1 cars new and old, motorcycles, trophy trucks, NASCAR racers, Can-Am cars; Goodwood's got 'em all. We can't think of any other event with so many automotive wonders.

At the center of it all stands an enormous sculpture by artist Gerry Juddah. Featuring significant cars from a single manufacturer the installations have been a fixture since 1997. This year's has been erected to celebrate 50 years of BMW's M division and features Bimmer's upcoming M Hybrid V8 LMDh race car, a V12 LMR, M1 Procar, 3.0 CSL and a 3 Series WTCC car. BMW reportedly footed a $1.22 million bill for this year's display. 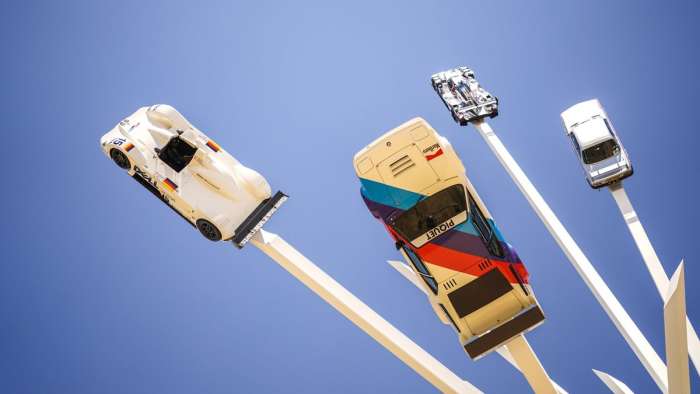 Here are some of Juddah's gravity-defying sculptures from years past:

Also making public debuts at this year's Festival are the Ferrari Daytona SP3, the Mercedes-AMG One hypercar with its F1-derived engine and the new BMW M3 Touring plus there's a 30th birthday celebration for the McLaren F1 and so much more. Check out the Festival of Speed Twitter page and marvel at the sheer variety of unicorns gathered in one place. Truly heaven on Earth.

A debut a lot of F1 fans have long awaited. The AMG One, affectionately known as the "F1 car for the road", boasts the same power unit as that of the modern Mercedes AMG F1 cars and is limited to just 275 units. A true marvel of modern engineering. #FOS #gw_mercedesamg pic.twitter.com/WG1CGYJyhU

Happy 30th birthday to the McLaren F1. We've got a stunning collection of them out on the Cartier Style et Luxe concours, they get better with age.

It wouldn't be a Goodwood event without Duncan Pittaway and the Beast of Turin! It's always a crowd pleaser. #FOS #gw_fiat pic.twitter.com/dnmtZNNi1r

This is the current hill-climb record holder: the Volkswagen ID.R driven by Romain Dumas.

The Festival of Speed is streaming live all weekend on the Goodwood Road & Racing YouTube channel.

Images by Lucid Motors and Goodwood Festival of Speed Licensed by CC BY 2.0.

DrTaras wrote on June 25, 2022 - 4:03pm Permalink
Amazing hypercars at #GoodwoodFOS, but its the #LucidAir they'll all want to drive on the daily!