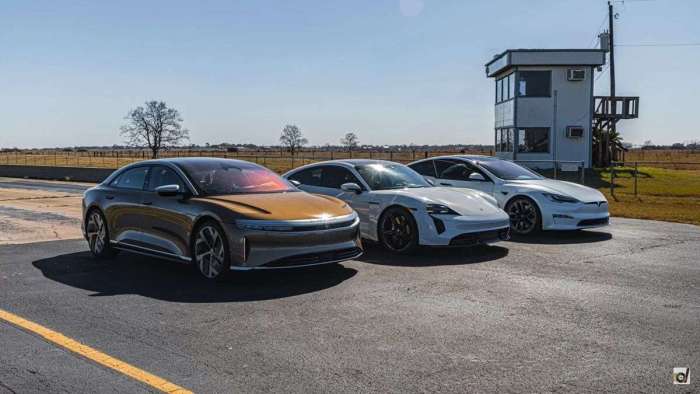 Three of the most powerful sedans in the world, three-wide down a dragstrip. DragTimes returns to Hennessey's private track to see who reigns supreme as the fastest four-door money can buy.
Advertisement

DragTimes is at it again with the third and final installment in the series that has previously seen the Model S Plaid beating the Lucid, and the Lucid wiping the floor with the Porsche Taycan Turbo S. This is the big one; three of the quickest, most powerful sedans in the world, on a drag strip, at the same time. I say "three of" and not "the three most powerful sedans" thanks the Dodge Charger SRT Hellcat Redeye holdin' it down for internal combustion with seven hundred and ninety-seven old-fashioned, loud and angry horsepower from its coal-burning V8.

Anyway, back to the EV Three, and some quick stats on each:

Let's Go Racing
If you watched the other videos in this series the result of the first race will probably come as no surprise. Despite the Porsche using its launch control function the fact that its down 270 horsepower and up 500 lbs. means it doesn't stand a snowball's chance in hell against the Plaid. It's unclear whether the Plaid was using launch control, and the Lucid Air has no such system.

With the Porsche relegated to being more of a camera car than a competitor this race is all about Tesla versus Lucid, and much like in the previous video the Plaid is more than a match for the Dream Edition Performance. The Lucid gets a good start and puts up an admirable fight, but the Tesla just keeps pulling away over the full race distance. The same is true for the second race, with the Lucid nearly able to hang with the Tesla and the Porsche left far, far behind again. 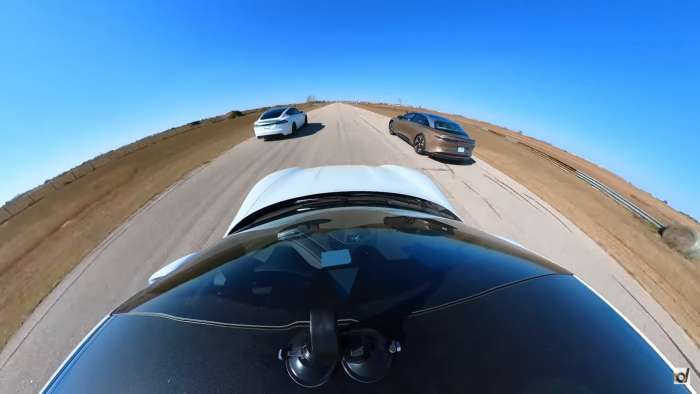 Roll Race
Results repeat once more in the third race, which features a rolling start and sees the Dream Edition do a little better, likely because the big luxury Lucid doesn't have to get all that sound deadening and vegan leather moving from a standstill. Still, it's the Model S Plaid's day, as again it keeps pulling ahead throughout the race. Tesla -3, Lucid and Porsche - 0.

Fit For Purpose
Thinking about the different design briefs for each car, it's not surprising that the Model S Plaid walked away with all three races. The Taycan, lower horsepower figure aside, is designed more for handling through corners than flat-out straight-line speed. The Lucid is a luxury limousine aimed at the Mercedes S-Class set with a massive power figure and engaging handling. The Plaid is "The World's Quickest-Accelerating Production Car" designed to add ridiculously rapid sprinting to the Model S's already impressive resume. That's something it clearly and decisively achieved here, with or without its launch control system. I'd love to see these three put in some autocross times!

For more on the Lucid Air's handling dynamics click here.

Images and video by DragTimes licensed by CC BY 2.0.

DeanMcManis wrote on February 19, 2022 - 6:27pm Permalink
There were no real surprises here with the Plaid being easily the quickest. But the Lucid being very quick as well. The Taycan was the world's quickest EV only one year ago, so it shows how quickly these EV are progressing. What isn't mentioned is the Plaid also had huge improvements in cooling, so that it can do repeated runs, and do very quick runs at lower battery power levels. The Lucid is more than matched against the Taycan in terms of performance in a Luxury car, and also against it's real rival the Mercedes AMG EQS. The Taycan has been a great success for Porsche, with impressive sales and performance that rivals or beats most of the gas powered vehicles in their model lineup, as well as against both BMW and Mercedes gas and EV European offerings.
James Walker wrote on February 22, 2022 - 10:16am Permalink
I agree, the rate of progress with these vehicles is staggering. The Taycan is still objectively a very fast car, but a year or two of development sees the Tesla and Lucid just walk away from it. Do you think horsepower will continue to climb with these kind of cars or hit a plateau?