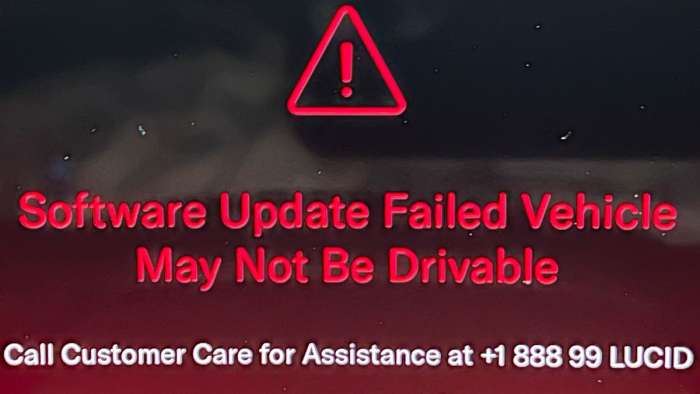 This isn't what any owner wants to see but the car remained drivable despite this worrying message.
Advertisement

The software update failed due to an as-yet undiagnosed problem causing the luxury electric sedan to shut down in some fairly major ways. After waiting for 3-4 hours for the update to complete the owner was able to see the dimly-lit warning message on his Lucid's screen once the garage it was parked in became dark enough.

We discussed the update with this owner and he wanted to make it clear that the car was able to move under its own power throughout the failed update event. 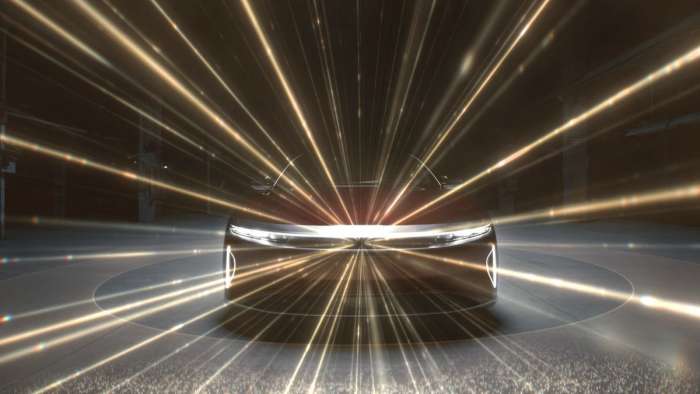 Update 1.2.6
Lucid's most recent OTA update is currently rolling out to owners in batches. Update 1.2.6 improves the functionality of the key fob, navigation systems, traffic sign recognition and improves the accuracy of range estimates among other minor improvements.

Telling his story in the Lucid Owner's Forum, the owner relays that he came out to find his car "totally dead" and mentions that he couldn't open the doors with the key for or exterior door handles. He ended up being able to open the trunk and climb through the rear of the car which allowed him to open the front doors via the interior door handles. Curiously the same method wouldn't work for the rear doors and they remained closed.

Lucid Customer Care
He then called Lucid's Customer Care line and was told that they would relay the issue to the OTA update team. About an hour after opening the front doors the car's alarm became functional and the owner was able to silence it with the key fob. The doors would now unlock and open but the error message remained on the screen inside. He was able to put the Air into drive and reverse inside the garage but didn't drive out for obvious reasons.

He received a call back from Lucid Customer Care telling him that the OTA team had put out another update for his vehicle which he initiated from the car. Having reached 24% completion after about 20 minutes it stayed that way for another 40 minutes before the car once again displayed the error message pictured above.

After charging overnight all seemed normal with the car. The battery read 100% and the Air could move backwards and forwards under its own power. The warning message was gone from the car's screens though this one remained on the owner's linked phone. 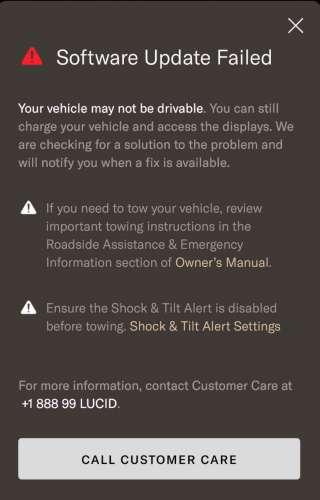 Problems like this are nothing new, especially for a brand new company like Lucid. Other members of the forum reported a litany of problems with their BMWs and Mercedes with both experiencing terrifying shut-offs at highway speeds while a former Tesla owner reported having to reboot their car bi-weekly.

We'd say it's a testament to Lucid's products and their early adopter customers that the owner of this car was quick to point out that the car was still drivable. This willingness to put up with teething problems is gold for a new company like Lucid.

Thanks to Barry Schwartz at Lucid Insider for putting us onto this story.

Images used with written permission from the owner.