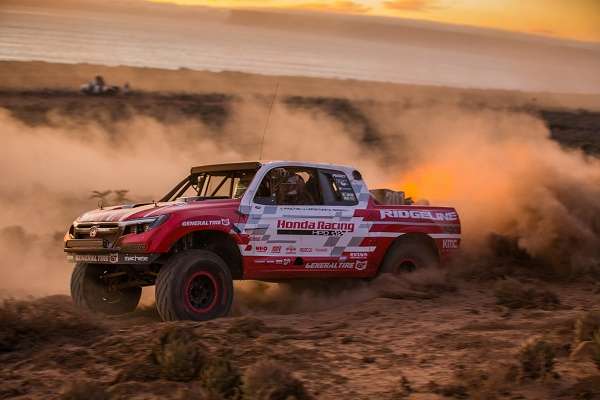 Besides the fact that the next generation Ridgeline will come to market with a more conventional looking profile?
Advertisement

Torque News readers were treated to a preview of the Ridgeline from the Honda Stage at the 2015 SEMA Show Las Vegas. We had hoped to gain a bit of insight as to what Honda held in store for near future 2016 Ridgeline owners. And, while the Baja Race Truck did feature a widened 2016 Ridgeline nose and side profile, that’s about where the similarity to the next generation Ridgeline ends.

Racing is racing. In the case of the 2016 Ridgeline Baja Race Truck, according to Honda Performance Development, the commonalities between the race truck and you're next generation Honda Ridgeline stops at the engine block and heads. That’s it!

Producing 550 horsepower, the H.P.D. designed and built twin turbo V6 has more in common with the Acura TLX G.T. race car than it does with the next generation production Ridgeline pickup. None the less, holding together on a near 900 mile desert race course through the mountain trails of Baja California, for 24 hours, is nothing short of astounding.

Been there done that

Here’s what I think: After speaking with Honda engineering, and following Honda light truck development for the past 24 months, your next generation Ridgeline will not only look much like 2016 Pilot, but have most if not all engine, AWD, electronic drive mode, and transmission components as featured in 2016 Pilot.

looking to the nose and fau-grill design of the Baja Desert Racer, you do catch a glimpse of what the future Ridgeline will look like. What will remain unknown until its reveal sometime after the first of the year, (Detroit) are final engine and transmission specifications, available options, safety features and estimated fuel economy.

I believe that for Ridgeline to make an appreciable dent in a light truck segment dominated by Ford F150, best in class fuel economy, top in class standard features, increased towing capacity, greater legroom, and personal device connectivity rivaling that of the Starship Enterprise will have to come into play.

In the mean time, enjoy the visual that is the class winning 2016 Ridgeline Baja 1000 Race Truck.