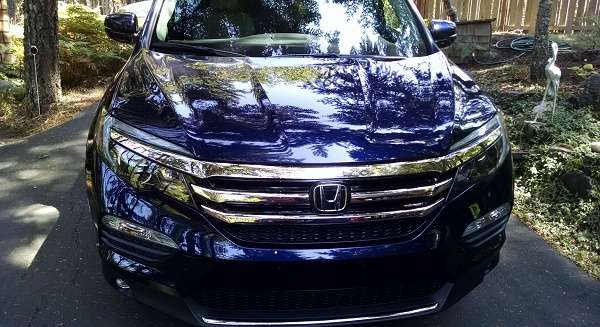 2016 Honda Pilot Elite tops the mainstream 3-row SUV segment in high- tech driven convenience features, but how about “truck-toughness” and utility, something that Pilot owners count on.
Advertisement

While the headline may be a a bit counter to what most folks think of Honda’s utility 3-row SUV, it’s tough to capture an accurate, all encompassing description of the exceptional tech-driven active safety and convenience features that populate Honda’s latest and greatest mainline SUV; while including the truck-like utility of Honda’s last standing tough guy.

For Honda-Torque News, Honda’s 3rd generation 2016 Pilot rolls off of the production line with more than a surprise or two. Arguably, one of if not the best looking 3 row SUVs available in North America today, Honda has raised the midsize SUV segment bar through visually pleasing high tech features, while retaining truck-like capabilities; you know, that thing that’s made Pilot a bestseller in America since its initial release in 2003.

Prior to attending Honda’s press introduction of Pilot in Ohio, way back in the early spring of 2015, we, like other Pilot owners, were a bit concerned as to 2016 Pilot coming off of the production line perhaps just a bit too refined. Well, as is said “looks can be deceiving,” this is the case for 2016 Honda Pilot.

Ridgeline’s cousin remains as utilitarian as ever, sans the vinyl wash off flooring mats; we haven’t come across those yet. And, after viewing 2016 Pilot’s aerodynamic facia, we believe we have a good idea as to what Ridgeline Pickup’s nose will look like.

Honda retains the “Truck-tough” in 2016 Pilot

In truth, Honda Pilot in the configuration that we know it today has not been around as long as one might think. Those smaller pug nosed Pilots you view running the roads of North America first appeared on the scene in 2003.

Designed by Ricky Hsu for Japanese markets in 1999, the first Pilots came on the scene in 2002 as a 2003 model and was available in all-wheel-drive only.

2006 marked the availability of a front wheel drive model, and as is par for the course, pilot continued to put on pounds and inches, due to public demand and heightened U.S. government safety standards. You may view Honda Pilot timeline here.

Yes, the 3rd generation 2016 Pilot is rated to tow 3500 to 5000 lbs, while safely transporting up to 7 people and gear, making it the heavy lifter in the Honda lineup. Standard equipped with Honda’s epic 3.5 liter i-VTEC V6,cylinder management, 6 or 9 speed transmission, optional Hondalink ™ infotainment, drop down high definition theater screen, 2nd row captain chairs and more, 2016 Pilot pushes the budgetary limits of the family-mainstream 3 row SUV segment, without losing its utility and truck-like utility.

As to mild off road-ability, yes, 2016 Pilot offers that too. While I wouldn’t personally take my latest test mule out clod-busting on it’s stellar set of premium 20 inch alloy rims and continental summer tires, it does come factory equipped with Honda’s very cool, state of the art next generation “Smart” all-wheel-drive, Intelligent Traction Management ™ and differential lockers for pulling heavy loads out of mud, sand and snow.

That’s the short list. For my latest 2016 Honda Pilot review, and full price and options list, read on. Bottom line: 2016 Honda Pilot, while presenting the maker’s benchmark in active safety, personal connectivity and comfort, retains the utility, mechanical bullet proof truck-like toughness that pilot owners demand. We like that!