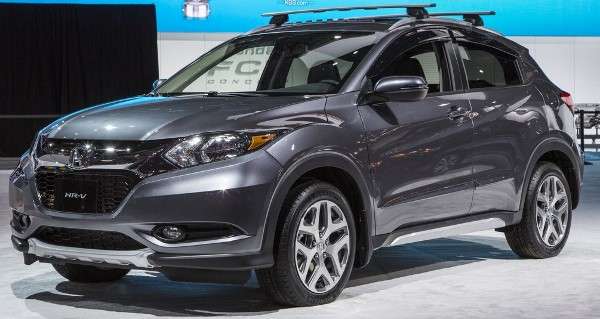 With media hyping HR-V top of the segment non-hybrid fuel economy, We believe that while fuel economy is a factor when considering a purchase, there’s something else in the works here. We believe 2016 HR-V will be Honda’s next hot-hatch.
Advertisement

Back in late 2013 when Honda announced a Vezel-like vehicle for North America, we hadn't viewed one in person. And frankly, knowing that Honda had been beaten to what is now being referred to as a “white hot market” by Ford, Kia ,Mazda and others, we questioned why the maker of the number one selling SUV in North America would gamble on the introducing a sub-compact crossover.

After all, there is plenty of competition in the segment. Why not an AWD or hybrid Fit as offered in Japan? That all changed for us at the Los Angeles Auto Show with the introduction of 2016 HR-V to the world. At first, not quite convinced by the stage drive on, HR-V began its rotation under lights and something about its balance of composition caught our collective eye. The exceptional body line was already there ripe for customization, right down to the shaved rear door handles.

This design works: Once again Honda has designed a small vehicle that captures the imagination, while promoting thoughts of,” Why would anyone need a larger SUV, crossover than this?” and, “How does Honda engineering create so-much usable interior volume within the confines of a compact exterior?” Setting the size of HR-V aside for a moment, take a look at the image at the top of this article.

2016 HR-V is easy to look at, and looking to the specifications should be a blast to drive. And yes, HR-V just recorded the highest EPA, MPG in its segment. The highest for a non-hybrid SUV, crossover in North America for a combined average mpg of 29. Not as high as Fit, but damned impressive.

It’s not so much that 2015 CR-V is too big, it isn't. Or that Acura RDX is too expensive, it isn't. We believe that 2016 HR-V, just a bit larger and sportier than 2015 Fit will fill the civic-want-to-be hatchback void left in Honda’s North American lineup.

With made in America turbo technology just around the corner, 2016 HR-V could be Honda’s next hot-hatch: As Honda’s Jeff Conrad puts it: ‘There’s nothing else like HR-V on the market.” Honda’s banking on it.

Robert wrote on January 20, 2015 - 12:23am Permalink
I don't know if you thinking the 1.5 would make it Honda's next hot hatch or if you believe they will shove the 2.0 in for a oomph, but either way I think it's wishful thinking. Honda isn't going to make this the poor man's Audi QS3 no matter how much you and I bargain with the heavens under a meteor shower.
Parks McCants wrote on January 20, 2015 - 1:09am Permalink
How ya doin' Robert? HR-V comes standard equipped with a 1.8 liter EarthDreams 4 banger. In standard trim horsepower and torque should be around 20% greater than Fit. What I'm looking for is a turbocharged version. We know that that's on board for Honda late in 2015. I know that Honda has a 'Sport" trim for HR-V in mind with a close ratio 6 speed transmission, limited slip diff in a FWD only application. I'll be attending Honda's roll out in Miami, late Feb. Should know more than .Turbo may not be available in the first year run, but it will happen.
Sean wrote on January 21, 2015 - 7:42pm Permalink
Do you mean there will be an HR-V rollout in Miami? Will cars be available then?
Mark Day wrote on January 20, 2015 - 1:28pm Permalink
What has kept me from both Honda and Mazda purchases is the lack of power. When I drive them the term "appliance" comes to mind. My current, newest vehicle, is a Toyota 2012 RAV4 Limited 269hp V6 4WD. Nothing currently, and apparently in the foreseeable future, interests me enough to make a purchase.
Alladat1 wrote on January 25, 2015 - 11:02am Permalink
Thanks for letting us know that this car does not meet your standards. If you don't like Honda or Mazda why reply to this post at all? There are lots of guys like you who wander the web and respond negatively to things that don't even interest them - have a nice life.
Mark Day wrote on January 26, 2015 - 10:53pm Permalink
Alladat1 is a self-appointed editor - would-be censor. The type: "I don't like the message so I'll personally attack the messenger."
Billybob207978 wrote on January 20, 2015 - 9:41pm Permalink
Wife has a new CR-V. Loves it. For me it's just too big, too high. Too SUV. I drive a one of the first Fits sold in New England. It is an amazing vehicle. Fun to drive. Cargo factor is astounding. Drawback? No AWD. HR-V = bingo. If you live where it snows and ice is part of life, an HR-V will be heaven sent. Fit owners know what a great little truck it can be. 8' lumber? 16' extension ladder? Pop them in and close the hatch. Can't wait for this vehicle.
Parks McCants wrote on January 26, 2015 - 6:50pm Permalink
I agree! Thanks Billy-bob. We'll be driving the HR-V next month in MIami. Looking forward to it!