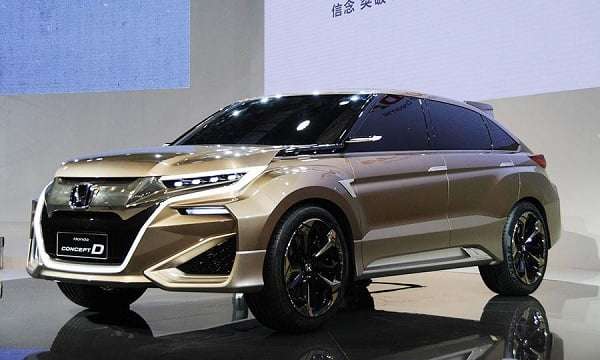 Here we go again: On the heels of the Beijing Auto Show, and China’s growing love of the SUV, speculation runs a muck in the auto press as to Acura’s Chinese market specific HR-V(Vezel) based subcompact crossover coming to America, I’m jumping in with an opinion.

I like a premium subcompact crossover as much as the next guy. For me, while perhaps just a bit tight as to head, shoulder and seat room, a well built precision subcompact, exhibiting performance tendencies, is worth the sometimes painful compromise as to plush accommodations and driving passenger comfort.

A factoid or two: China is the largest growing car market in the world. Honda Motor Company has been there through 2 manufacturing and distribution partnerships since 1989; and currently export vehicles to Europe through that partnership. * Dongfeng Honda, Guangqi Honda -- produces Honda Vezel(HR-V)

To date, Honda has imported ZERO made in China cars or light trucks to North America -- and looking to Honda’s commitment to regional manufacturing and distribution-- that’s unlikely to happen anytime soon.

Honda’s manufacturing target for the not so “sleeping giant” is 1.07 million in 2016

Torque News was first introduced to Honda HR-V back in November 2015. At that time we speculated as to the eventual spin off of an Acura branded HR-V, with perhaps a more refined upturned turbocharged engine, expanded personal electronics connectivity, and expanded active safety feature suite.

Acura has announced a turbocharged gasoline/electric hybrid motivated MDX for 2017, with the smaller, less expensive RDX to surely follow. With Honda’s dedication to electrification throughout the lineup comes increased fuel efficiency. Add to that attribute all wheel drive, all wheel steer, and the expanded near autonomous capability of Acurawatch ™ , surround view backup cameras, pedestrian watch, etc, the want and need for a near micro-sized Acura branded crossover remains in Asia.

Could a subcompact crossover live up to Acura’s mantra of “Precision Performance?” Today, we have Acura’s promise of expanding “precision performance” throughout the lineup, as well as injecting a bit of “Precision Concept” design cue throughout not only the sedan offerings, but the crossover, SUV lineup as well. Is there room for a Honda HR-V sized crossover in the Acura lineup, and are Acura buyers clamoring to purchase one? I don’t believe so.

Built in China, marketed as an Acura

We’ve seen it before. Looking to Honda manufacturing/marketing partnerships of the past, several manufacturers including Isuzu, Mitsubishi, British Leland and others have partnered with Honda in strategic alliance. The purpose of such partnership is generally to ease Honda’s transition into a growing market. Honda has been in China for nearly two decades, and is in-fact placed at the front of the wave that is the personal auto craze in the world’s second fastest growing economy.

With that said, the exponential sales growth and resulting profit realized by Honda Motor Company through the introduction of the Acura brand to mainland China, is only known to Honda. I’m assuming that 2017 Acura NSX in very limited numbers will end up there, why not expand brand recognition?

For many Acura watchers including myself, the unprecedented sales of the portal ILX compact sedan has been a bit of a surprise. According to Acura, ILX is most popular among young buyers wishing to transition into the lineup at an attainable price point.

Perhaps the same would hold true for an HR-V platformed Acura crossover. But, looking to the beginning MSRP of Acura’s only and best selling 2-row crossover RDX,( $35,370+) And the Honda HR-V( MSRP $25,990 +)

Acura does not need to go there to measurably maintain or increase sales in North America. At any rate, if and when the CDX crossover does come to the North American lineup, it will be manufactured in North America to U.S., E.P.A. safety and emissions standards. I wouldn't hold your breath waiting for one.