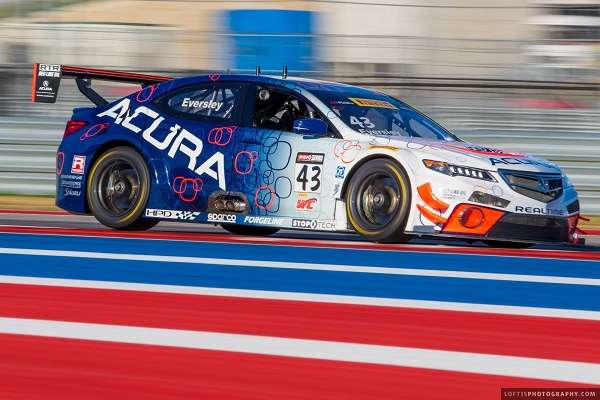 For the 2016 Pirelli World Challenge series, Team RealTime Racing, and Honda/Acura Racing, with the sponsorship help of Red Line Synthetic racing oil, Stop Tech brake systems and others, return the Acura TLX GT #42 and #43 cars to the track for yet another year of no holds barred, running start, extreme high performance production based track racing.

As reported by RealTime Racing, development testing of the reconfigured rear-wheel drive Acura TLX GT at Circuit of the America’s located on the outskirts of Austin,Texas was very successful, with no breakdown or track handling mishaps. That’s a great start to a great race season.

As earlier reported by Torque News, Team owner and lead driver #42 Peter Cunningham, along with team mate and car # 43 driver Ryan Eversley, return Acura TLX to Pirelli World Challenge with a changed drive-line configuration. For 2016, Acura TLX GT will run a series compliant rear wheel drive configuration. The “only” all-wheel-drive car on the track is no more. As goes NASCAR so goes P.W.C.

Racing is racing. At the end of the day Acura TLX GT shares an engine block and body panel design in common with your 2016 Acura TLX, and that’s about it. The performance engine is built and provided by HPD.(Honda Performance Development Inc.) Rated at 550 horsepower or so, this fire breathing twin turbocharged 3.5 liter V6 is race proven, and apparently mechanically bulletproof. HPD also run the engine in this beast.

We’re not privy to the differential and transmission specifications. However, I believe the balance of the car’s fabrication to rest with RealTime Racing ™ -- truly a rolling work of art. For those of us that follow Pirelli World Challenge, after coming off of season #2 in 2015 with a respectful, yet anti climatic finish record, it became obvious on review of race footage, that team Acura was being team blocked, just a bit. As shared with me by Art St, Cyr, the no nonsense head of Honda’s racing arm, “there will be some changes for Acura TLX GT in 2016.”

While neither Art nor P.D. Cunningham will confirm my suspicion of unwarranted competition TLX team blocking, at the hand of Bentley and others, with a knowing wink and a nod, it is hoped that the reconfiguration of TLX GT to rear wheel drive will result in a more level playing field -- leading to winning season for RealTime Racing. They’ve earned it! Pirelli World Challenge will kick off on March 03 at “The Circuits of the Americas.” We look forward to some Texas style Realtime Racing woop ass.