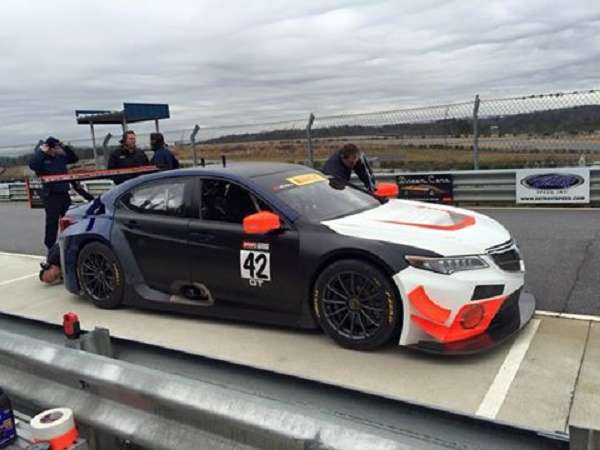 Torque News found a minute with RealTime founder Peter (P.D.) Cunningham at the Acura stage, SEMA Las Vegas. We talked about the future of the Acura TLX GT program.

RealTime Racing’s founder and lead driver Peter Cunningham, or “P.D.” as those fortunate enough to know the man call him, is a life-time car builder and race car driver. Cunningham is the winningest driver in what is arguably the toughest race series in North America, Pirelli World Challenge.

Running in the “Pirelli World Challenge” GT class, Peter and team mate Ryan Eversley opened the 2015 Season with one hell of a performance in the rain. Driving the only 4-wheel(AWD) drive cars on the track, the Acura TLX GT team advantage was evident, they were damn sticky, and exhibited exceptional handling on the wet track, these cars danced on water.

Acura TLX GT track domination would end all too soon, as the competition team-blocked Cunningham and Eversley. In watching the race, it appeared that the Bentley Continental GT Team,, Cadillac and others, didn’t welcome AWD technology in the series. Peter tells Acura-Torque News that the accepted track drive configuration for Pirelli World Challenge these days is rear-wheel, so be it!

The Acura TLX based GT car has undergone a major drive-line reconfiguration for the 2016 race season. And here’s why.

In my opinion, based on Pete's wink and a nod, and sprinkled with a bit of racing brake dust of my own, by running a rear-drive configuration, RealTime Racing hopes to level the playing field, and reduce competition team-blocking, while increasing the opportunity to dominate the GT class with the HPD prepared turbocharged 3.5 liter VTEC V6 Acura TLX GT car.

An added benefit may be a loss of component weight. In racing, this often equates to greater power and fuel efficiency. With the front differential and transfer case gone, TLX GT loses weight, while reducing front to rear differential “interactive”cornering drag. It will be interesting to see how TLX GT handles in RWD setup form. I believe Team RealTime will dominate GT.. Of course I predicted that back in 2014. It will come. I captured a handful of SEMA Show closeups of #42 in Las Vegas, Nevada. No bones about it. This is a signature RealTime R&L built and prepared racecar. I’m assuming that nothing's changed under the hood.(500 + horsepower) However, we’ll have to wait a few weeks for that disclosure as Peter and team prepare for Race #1 Circuit of the Americas, March 3-6, 2016. It's how torque is transferred to the road that has changed for Acura TLX GT in 2016, as Team RealTime Racing drops AWD for Pirelli World Challenge 2016.