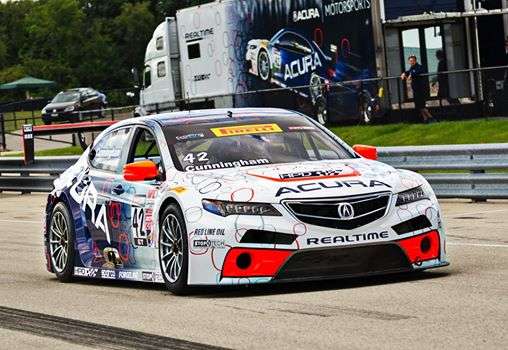 This weekend marks rounds 13&14 of Pirelli World Challenge season # 25. While its been a short season for Real Time Racing and Acura, we anticipate racing excitement emanating from 2015 TLX GT.
Advertisement

Peter Cunningham is the winningest driver in PWC.

Watching Peter Cunningham pilot the all new 2015 Acura TLX GT on Mid-Ohio’s flooded track for the Honda Indy 200 race weekend, was nothing short of witnessing a racing wizard avoid disaster. Yes, there was a bump from Bentley, but more than that, we watched Cunningham (more than once,) take the 2015 Acura TLX GT all-wheel drive marvel and defensively drive TLX GT to an uncrumpled finish; not an easy task on a flooded race track.

2015 TLX GT handles like no other car on the track

If nothing else, MId-Ohio demonstrates RealTime Racing, HPD and Acura’s ability to build a car of exceptional handling capability and mechanical fortitude. As RTR owner and Driver Peter Cunningham puts it, “the car kept getting faster with every session all weekend.” We expect it to get faster yet as Cunningham and TLX GT take on a world-class lineup of super GT cars.You may read more about TLX here.

It,s a strange experience watching Corvette and Ford Mustang wrestle for position with Bentley, Ferrari and Porsche. But that's the beauty of Pirelli World Challenge, year 25.

Coming off of Mid-Ohio with a debut finish of 13th and 19th in a field of 51 contestants, Torque News looks to RealTime racing to push Acura TLX GT to a higher finishing position in the final race of the series.

Thank you Acura
Thanks to Vince and the team down at Acura Torrance, I’ll be reporting from my SCCA home track Sunday. We look forward to catching Peter Cunningham, HPD, Indycar, and Indy Lites for a quick hello and update Sunday morning; see you there.