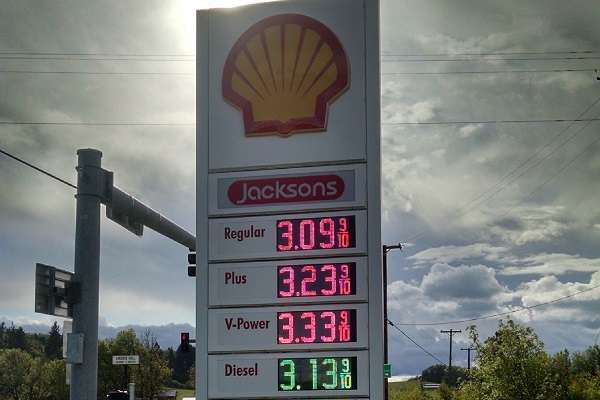 Torque News looks to the experts for an accurate prediction of where gasoline pump pricing will land for the peak-driving season, summer 2015.
Advertisement

Driver’s in Western Oregon have most likely noted a 20% increase in the pump price of Unleaded Gasoline since April 1. With the average pump price of gasoline approaching or surpassing $3.00 per gallon in many Eugene and Springfield neighborhoods, the question that comes to many drivers is “how high will the price of gasoline go in the peak summer driving season,” will it follow historical price patterns?

Frankly, stepping off of the plane on a return flight from Cincinnati,(gone for 8 days) I was more than just a bit blown away by the posted price of gasoline witnessed at West 11th and Greenhill Road, Eugene, Oregon. Granted, that’s one of the highest priced Shell stations in the region.

None the less, sometime during the week that we were flying, unleaded gasoline had crossed the $3:00 mark in Oregon. Before throwing the local indicators into the round file as regionally insignificant, I opted to spend a few minutes researching this recent development.

Browsing the internet and checking in with Oregon AAA Auto Club, we discover a plethora of analyst driven retail gasoline articles assuring the reader that the price spike currently reflected at the pump is a commodity market knee jerk reaction to a recent uptick in the barrel price of crude oil. And, that pricing should “cool down” as we head into the summer driving season.

Personally, I believe the consumer is once again being conned at the hands of unregulated worldwide-commodities-trading. And, with the recent 6 month run on SUV and pickup truck sales, is ripe for the taking.

We look to gasbuddy.com for a prediction

The short story is that Eugene and Springfield unleaded gasoline is no less than 20% more expensive than it was at the beginning of April, and, sits right at the top of the nation in average pump price. When we take into consideration that there's no sales tax in Oregon, Eugene and Portland adjust out to some if not the highest (average) retail gasoline pricing in the nation.

Penned by Patrick Dehaan, chief analyst and originator of thegasgame.com, and Greg Laskoski former regional director of AAA Auto Club south, gasbuddy.com, looks to the present and near-future trends in nationwide gasoline pump price, and how world-events impact that price. Then, they pull a proverbial rabbit out of the hat and boldly predict the regional market “lows” and commodity volatility driven “highs” of the month to month gasoline price in the major metropolitan areas of the United States.

For reasons known only to the Northern California, Southern and Western Oregon based distributors that dictate Eugene and Portland Oregon retail pump price averages, Eugene and Springfield Oregon pay a higher price for retail gasoline than their neighbors in Florence Oregon, and most of the nation for that matter.

With that tidbit of gasoline price inequity news set aside, Dehaan and Laskoski (I think I went to school with the guy) of gasbuddy.com, predicts that average fuel prices will stabilize sometime in June and actually recede a bit through Q3 and Q4 2015; landing somewhere lower than $3:00 per gallon. Good news for all you new full size pickup,crossover and SUV buyers. However, with the price of gasoline sure to rise, it won't be long before these guys are saving a few dollars.

Earl Richards wrote on May 8, 2015 - 2:59am Permalink
Global oil markets are over supplied and there is an oil glut in the Cushing spot market and in the Permian Basin, so the gasoline price should drop. Google and read the "$2.5 Trillion Oil Scam - slideshare." The US is a victim of this scam.
Parks McCants wrote on May 8, 2015 - 7:35pm Permalink
Welcome Earl. We'll check it out!