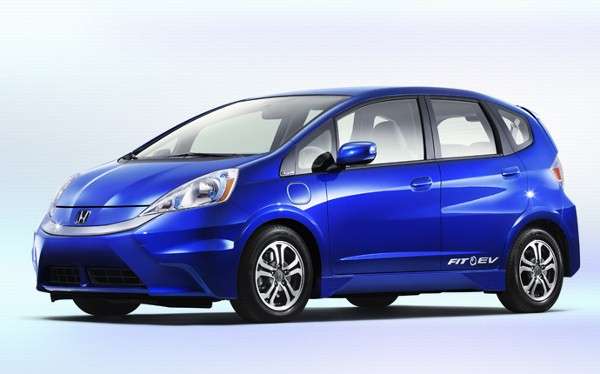 As reported earlier by Torque News and the world press, Honda came out in force for the 2014 Broadmoor Pikes Peak IHC. Co-sponsor for the event, American Honda Motors, Honda R&D and HPD fielded 6 factory supported entrants in as many divisions. A slightly modified 2010 Fit EV with full race cage, tuned suspension and lightened interior and body work won Production EV Division in record time. It was the only factory sponsored entry to do so.

No stranger to International Hill Climb: In 2012, Dumas came within .01 second of taking the title, actually setting the record in the Pikes Peak Open Division behind the wheel of a Porsche GT 3R. Time: 9:46.181. Average speed:122.8 km/h.

Dumas was the only gasoline engine powered car to beat the EV entrants in the Unlimited Division. 3 battery powered race vehicles came within seconds of Roman’s ascent, with the Mitsubishi powered car of Greg Tracy coming within 2.38 seconds of the winning run time.

For EV enthusiast that have tracked battery and electric motor technology advancements for the beter part of 3 decades, the Mitsubishi and Monster backed assault on Pikes Peak presents rather broad implications; Near unlimited torque, zero hydrocarbon emissions at the flip of a switch. Let us know when your golf cart hits 120 km/h on the Green, we want to report the event.

Honda Fit EV is a lone wolf. Here’s the problem that we have with Honda; not to take anything away from HPD’s Roy Richards. He and Honda took a slightly modified 2010 Honda Fit EV and broke the 3 year standing record of Chad Hord’s Nissan Leaf; Not a small feat. Time:12:55.596. By production EV standards this is flying.

Richards beat Hord’s record by close to 2 minutes on a 12.42 mile road course. Unheard of...

Back to the problem that we have with Honda: The Honda Fit EV is not available to North American buyers as a direct purchase vehicle. The current 2014 Fit EV is a very low production compliance vehicle, available to a select few in a handful of states on a “lease only” basis. Our research of production and sales volume would indicate that Honda imports the made in Japan Fit EV for C.A.R.B. compliance reasons only.

California is the largest car market in North America and has targeted zero emmisions particulates by model year 2022.

All auto manufacturers wishing to participate in the California auto market are required to produce a percentage of zero or near zero emmisions vehicle by the state; as a conditional marketing provision. Honda, Toyota and others hold the line on 'True EV' production within the confines of minimal compliance.

That's were Fit comes into the picture. With a mere 1100 units per year produced for North America consumers, Honda claims to lose dollars on every Fit imported and sold in North America. The Fit may very well be doomed to a historical foot note due to the cost of production and the limitations of travel range between charges.

In-fact, we find no evidence that the Fit EV will be available to the public for model year 2015. So, why bother Honda? Much like pushing the vintage first generation NSX up the hill with no rear brakes, the Honda Fit EV may soon be a thing of the past as Honda pushes for the development and release of Accord and Civic Plug In Hybrids and the long awaited FCEV for 2015. We see Hyundai, Toyato and others following suit as California and New York financially participate in the expansion of Liquid Hydrogen fueling stations.

While Honda takes credit for winning 13 divisional titles in 13 years of racing Pikes Peak IHC, this year’s results leave us a little flat as we ponder the fate of Honda’s only stand alone EV. The mass- expansion of FCEV technology powered vehicles is decades away from reality. EV is but the flip of a switch away as many regions of North America transition into clean or non fossil fuel burning power generation.

Perhaps it's time for our friends in Torrance and Tokyo to reconsider the viability of EV.