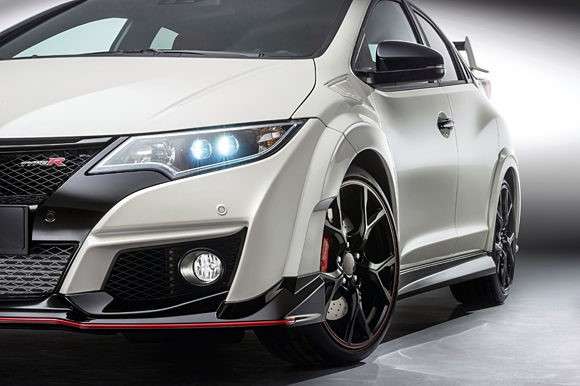 We’re told by Honda that the initial run of the much anticipated 2016 Civic Type will be limited to 750 very fortunate buyers picked by lottery.
Advertisement

Talk about suspense and intrigue. Honda Motors is second only to Hollywood in drawing out a story line. Honda fans have been watching the drama that is the development of the venerable Civic Type-R for years, with the hopes of actually seeing one on the street, if not personally getting behind the wheel of Honda’s 180 mph super slalom.

Why so few my friends?

Were not sure what Honda’s up to. But as with most high performance car offerings, initial allocation and world production numbers will be limited for the 300 horsepower, 400 ft-lb-torque pocket rocket. Basically, by producing a very small number of 2016 Civic Type-R, Honda is ensuring the market for the car with worldwide demand far exceeding supply.

For those buyers fortunate enough to secure Civic Type-R, instant collector-car status will be thrown into the mix as a standard feature.

Price, availability and a handful of specifications

2016 Civic Type-R when released for production in late November 2015, will be the highest performance Honda car manufactured for legal street use to date.

While Torque News and others have covered the development of Civic Type-R in length, today we have a confirmation as to Japan market MSRP, horsepower and torque figure.

Although not the Type-R that set the Nurburgring lap-record,( that was a development car) the 2016 Civic Type-R being released to Japan is a direct precursor to what Fans may soon see in North America. According to Honda, MSRP for the 2016 Civic Type-R converts to $35,481 in U.S. dollars, is very quick and track-sticky. Hopefully North American buyers will have an opportunity to purchase the English manufactured Civic Type-R in mid year 2016, or at the least, see one on the street.