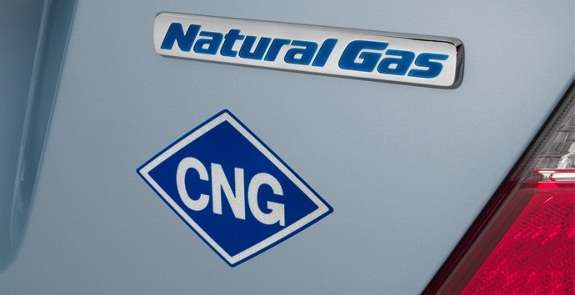 We look at possibly the "greenest" fossil fueled car in the United States, and why Honda can’t give away the CNG fueled Civic Natural Gas
Advertisement

Sunday, while searching through the World Wide Web for Honda related news, we came across a Eugene, Ore. regional article written about a local business family's venture into the compressed natural gas( CNG) refueling business.

Much like American Honda Motor Company, Eugene business owners John Anderson,Tricia Howell and Paula Fry may be a decade ahead of the trend when it comes to mainstreaming CNG fueled personal transportation. However, as owners of Coburg, Ore. based “Truck and Travel” Truck Stop, it’s a calculated risk. Located on the Interstate 5 corridor between Roseburg and Portland, John and “Truck Haven” is in a prime position for growth.

After studying the fuel industry John had discovered that the Port of Long Beach Ca., the busiest freight terminal on the West Coast had mandated the mandatory use of CNG fueled trucks and forklifts; thus eliminating the choking pollution emitted from gasoline and diesel fueled transports.

He see’s the increased utilization of CNG in personal transportation as a growth industry. We agree...

John speaks on as to the positive attributes of the low carbon emitting, plentiful fuel that he believes by mid-century will replace oil refined gasoline as the primary fuel utilized for commercial and personal transportation. Not a new concept, compressed natural gas has fueled business service fleets and public transportation districts for decades.

John states that a vehicle powered by a gasoline engine can be converted to CNG for under $10,000. We believe it can be done for much less.

With a 348.8 trillion cubic feet known reserve of natural gas in North America, John and others believe that CNG can free the U.S and Canada from foreign oil dependency.

Here’s the problem for Western Oregon and much of the United States. John’s site is but one of only 3 public access CNG refueling stations in the State or Oregon. The others are private company or civic owned.

To date, the only viable application for an exclusively CNG fueled vehicle in Oregon and many regions is local route commercial, private and public transportation. In John’s case the out of pocket expense to build his CNG refueling station will exceed $1 million. However, the state of Oregon will subsidize 30% of the venture through business tax credits.

Honda’s CNG fueled Civic was developed as a government and municipality fleet vehicle and is marketed as such. When searching for a 2014 “Civic Natural Gas” through Honda’s official website, you won’t find one. Instead, you will be directed to a 2012 model with a $3,000 fuel incentive attached to the deal.

While we do find mention of a 2014 NG model on the Web, we don’t find one being offered through American Honda Motors.

The new 2012 Civic Natural Gas and Fleet has a msrp of $26,305. Both models feature a small displacement SOHC i-VTEC 4 cylinder with automatic 5 speed transmission, developing 110 hp.
The rest is all Honda.

When we take into consideration the $3,000 fuel card and divide the purchase price by the trade-in life of the car, the Civic Natural Gas is less expensive than a 2014 Honda Fit.

The good news is that CNG is a dollar less per gallon than unleaded regular gasoline in most markets. The “Civic Natural Gas” is fuel efficient with a rated 27/ city 38/hwy for a combined mpg of 31.

Intended for civil and fleet duty, this Honda is rather utilitarian in nature, offering very few options. However, Honda’s 1-MID electronic interface and a handful of options is available.

Getting back to the story, we do like the idea of fueling with a low carbon based compressed natural gas. Used in heavy duty delivery, service vehicles, dump trucks and municipal transit districts, CNG may be a logical solution to weaning North America off of gasoline.

We’ve spoken with fleet owners that run on CNG. They shared with us that engine life is doubled while oil change and service cycles are halved due to the lack of petroleum based hydrocarbons in CNG.

As the mind wanders a bit we wonder what Hybrid combinations Honda may develop on the road to energy independence and alternative, sustainable fuels. John Anderson of Eugene believes that his children and grandchildren will benefit from his venture into CNG fuel stations. We hope the benefit comes a bit sooner as Honda and other’s break the 50 mpg barrier with fossil fueled engine and electric motor driven personal transportation.

John Goreham wrote on January 27, 2014 - 11:15am Permalink
Excellent update on an almost forgotten very green Honda. One thing for perspective. The CNG Civic is not the Civic with the lowest CO2 emissions. That would be the Civic Hybrid which emits just 200 grams per mile. That is 10% less than the Nat Gas car (218 g/m). CNG is only green when compared to "regular" cars.
Parks McCants wrote on January 28, 2014 - 2:43pm Permalink
Good day John. I'm assuming that the emission rating of the Civic Hybrid is based on an average of combined gasoline engine and electric motor driving time. Correct?
John Goreham wrote on January 28, 2014 - 3:02pm Permalink
Yes. That is where the magic happens. Imagine a Nat Gas, electric hybrid. That would really be an alternative to full electric.
Parks McCants wrote on January 28, 2014 - 5:44pm Permalink
Agreed. Demand will drive the development following the next contrived fuel shortage. The U.S. can't take another round of $5 per gallon gasoline. Time for ' we the people' to step up.
Terryray Thompson wrote on January 29, 2014 - 12:05am Permalink
I'm a petroleum contractor in Oregon and Washington, Don't understand why the gas station owners don't just add a small CNG unit to their prime location to make a network, so that a CNG car can travel from Seattle to LA or NY. I have researched fueling cells they are easy to install. Take John Anderson's lead and invest in CNG stations
Parks McCants wrote on January 29, 2014 - 2:38pm Permalink
Thank you Terry. Sounds like logical progression to me. Do you know of any safety issues? Would the service be isolated from the gasoline and diesel pumps as propane is? Or is that the issue? Do propane distributors block the distribution of CNG at gasoline stations?
Terryray Thompson wrote on January 29, 2014 - 3:04pm Permalink
Hey Parks, I don't know of any safety issues. CNG has been around for many year and the new compressor are more efficient. As for construction, you could put a CNG dispenser next to a gasoline or Diesel. If you lease your land from a petroleum company there could be restriction written into your lease agreement. I do not see how a propane distributor could block distribution. You need to have a natural gas line from the local gas utility available at your location (underground) to be more economical. How can a propane distributor block that. There is an option to truck in CNG but that can cuts into your profits.
Parks McCants wrote on January 30, 2014 - 12:09am Permalink
Thanks Terryray.. I'm on it...