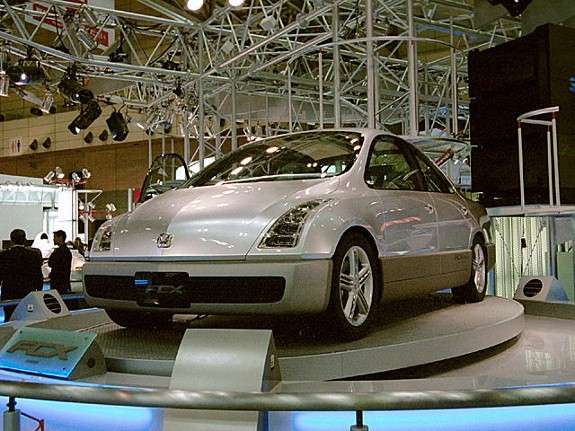 2015 may be the year that a Honda FCEV is actually released for sale to the general public. To date, that hasn’t happened. We trace the history of fuel cell development back to the 1959 Allis Chalmers Farm Tractor.
Advertisement

Last November the world watched as Honda Motor Company unveiled what it referred to as the ‘future in zero emissions’ applied automotive engineering.

With the unveiling of the Japanese manufactured FCEV Concept, the automotive press was assured that the prototype represented many technological and design aspects of the 2015 FCEV to be released to Japan and North America some time in 2015.

Honda has now taken the lead as to an actual production FCEV through its innovative “fuel stack” technology.

Although other manufacturers have promised their release of a FCEV for 2015, Honda appears to be the front-runner in the field, with a smaller fuel cell, superior battery technology and a longer stated range between fuel stops. But they are not alone in the arena.

While Honda may beat G.M.,Toyota, Hyundai and others to a viable retail market , the handwriting’s on the wall.

North America’s largest new car market, California, wants 70% of all cars new to the road within the next 20 years, to be hyper-efficient I.C., Electric Hybrid, Plug in Hybrid, stand alone EV or FCEV.

California is investing $100 million in matched grant development money for the building of a dedicated hydrogen fueling network.

Not the first to venture into fuel cell development, Honda, along with every major, several boutique automotive manufacturers and most Universities in the U.S., has toyed and tinkered with various fuel cell configurations and applications.

The tractor can be seen here, but much like the Spruce Goose of the day was under-powered and too expensive for marketing to rural America. Gasoline and diesel was cheap, farmer’s were leery of the new technology.

First on the automotive scene with FCEV technology was General Motors.

The number 1 car manufacturer of the day produced and tested a fuel cell Hybrid “Electrovan” back in 1966. While the exercise proved that hydrogen fuel cell technology could be applied to automotive propulsion, the fuel cell itself was huge, dominated the cargo area of the van and was unmarketable.

Daimler Chrysler, Mercedes Benz,Toyota and others have ventured into the fuel cell game. They all have viable FCEVs concepts and few working models running on North America’s highways.

But, all have dedicated corporate assets to the further development of low emission I.C., electric hybrid cars and light trucks. The general consensus is that America is not ready for fuel cell enabled personal transportation. We disagree.

Honda may be the exception. We’ll have to wait until late 2015 to find out.

mike w. wrote on March 22, 2014 - 4:13pm Permalink
Well the concept of hydrogen fuel cell and its "Zero" emissions appeals to me I'm not convinced its as clean as the car manufactures claim. We have a Nissan Leaf and solar panels which I believe to be "clean". Hydrogen today is usually made from reformed natural gas which has a much higher CO2 and energy signature compared to EV. There is only 1 hydrogen fueling station in the metro D.C. area but thousands of electric plugs. good luck getting one of those in my garage.
Parks McCants wrote on March 23, 2014 - 5:24pm Permalink
Good day mike w. Are you charging your Leaf directly with solar panels? That would arguably be a step in the right direction depending on who manufactured your solar panels. German, Chinese? All manufacturing including solar cell construction impacts the environment. So, let's say you, like most folks recharge via public or private power grid interface. What fuel is being utilized to generate the grid current? What is the efficiency drop of the energy provided? What is the efficiency of your Leaf as to charge rate and ( battery) retention? Yes, the generation and storage of Hydrogen is energy intensive. How does it pencil out against grid based battery recharging? couldn't tell you. Yes, it will be several years before the availability of hydrogen full becomes mainstream.
Mr. Kim J. wrote on March 22, 2014 - 5:20pm Permalink
I can hardly wait for fuel cell cars to be available. When I was in junior high school I came up with the idea that someone should build a car that could run on water. You could fill it up with your garden hose. Hydrogen fueled engines are the closest we will ever get to my "dream car". I have my 3rd Toyota Prius but am switching to Honda Civic Hybrid due to my anger against Toyota for lying to US govt. & people about unintended acceleration in Toyota/Lexus cars that caused 37 people to die in crashes. Please do NOT buy Toyota products as they do not deserve the sale after what they have done.
Parks McCants wrote on March 23, 2014 - 5:28pm Permalink
Good day Mr. Kim J. I like your water idea. Believe me its been explored in the past. Best of luck with the Civic Hybrid. I believe you'll enjoy it.