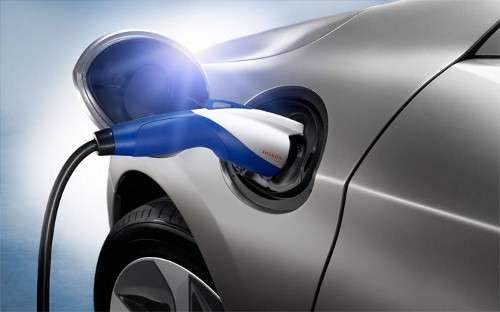 Dr. Ferdinand Porsche invented the first Hybrid Auto back in 1901. Today we go back to the future as Honda and the University of Delaware move closer to making their V2G (vehicle to grid) project a reality. All a party to 'mainstreaming' electric vehicles in North America.
Advertisement

The principle is a relatively simple one. Much like selling surplus power back to a regional utility via a residential integrated solar panel array, the University of Delaware is proposing the same for your plug- in, EV or Hybrid. Well, not exactly…

What we're truly looking at here is a surplus energy swap through a bitmap controller, that allows the idle car to communicate with the regional power grid manager. In the case of an electric car, the owner will control the amount of stored power “sold” back to the grid. In this example, we sight PJM Interconnection, the largest grid manager on the East Coast.

My hat comes off to Research Director Willett Kempton for launching the concept program in 2004. I like it, and we’ll need it…

I believe that in the not too distant future, the majority of automobiles on the road will be some form of fuel cell-EV or plug-in EV. Fossil fuel will be a thing of the past, and Grandpa’s 57 Chevy will be converted into living room furniture. Smog will be a problem of the past. Nuclear waste? That's for another story.

Here’s how it will work.

Your Accord plug in or FCEV(if it has plug -in capacity) will reverse -flow excess battery storage capacity back into the power grid via a controller developed through the UD’s Center for Carbon Free Integration. You can read about the program here. Assuming that electric car production reaches critical mass in the not too distant future, this energy swap will be critical in maintaining grid-flow during peak energy usage hours. And that’s a big if.

The partnership project between UD and Honda is on an ‘ experimental’ basis. For the program to be successful, a major manufacturer such as Honda would agree to integrate UD’s board into mass produced EV’s. BMW is also on board with the project.

This is how Honda see’s it...The technology to send power in two directions is new, said Marcos Frommer, a spokesman for Honda. There are technical and regulatory obstacles that need to be overcome, but eventually they envision using it in electric vehicles offered for sale, Frommer said.

In my opinion, the handwriting’s on the wall. Taking a look at the 2014-15 model year offerings from all the majors, plug-in EV or fuel cell EV is the future for personal transportation. This is a growing ( logical) trend that’s 150 years in the making. In the late 1800s those that had real money owned an electric powered carriage. They were clean, vibration free and by the turn of the century had a range of 100 miles between re-charge. The downside was battery technology and the initial purchase cost. A well appointed coach of the day approached $80,000 in today’s dollar.

With the advent of the internal combustion mass produced 4 wheeler, the expensive and generally slow electric car was reduced to alternative status. One reason was elementary, most of rural North America was not electrified until after world war two. That’s why when you see an antique photo of great grandfather’s farm you’ll most likely see a Ford or Dodge Brother’s truck or car in the background.

The first gas/electric hybrid concept is attributed to Dr. Ferdinand Porsche back in 1901. The car, although heavy and slow by today’s standard, was a vehicle of many firsts. 4 wheel brakes, all wheel drive, electric gasoline co-generation, and, for this story, the production of surplus energy stored in deep cell batteries.

As I stated in the first paragraph. Its been a long time coming. Welcome back to the future.

Parks McCants wrote on December 17, 2013 - 3:28pm Permalink
Well that's how I see it. Don't get me wrong... I love the smell of gasoline and nitro in the morning. Perhaps Honda will develop a breath freshener or car deodorizer sporting the faint sent of spilled gasoline for old motor-heads like myself. In the mean time, let's keep the R&D moving forward. The world required clean, low impact transportation. As it is, I'm breathing China's smog and eating Japanese radiation in Oregon...
bruce dp wrote on December 18, 2013 - 7:08am Permalink
I realize that your Oil and automaker advertizes like the way you wrote this piece so that the term EV (Electric Vehicle, does not use chemical-fuel, recharges off the electrical grid or an outlet) is used for nearly every vehicle, but that is just plain wrong and confuses the heck out of the public. No one would call a diesel car a gasoline car, nor would they call it a natural-gas (cng) car (the cleanest of the three). Its not about being a purist, snob, or jsut plain too picky. Writers have a responsibility to use the English language correctly, to convey truth to the reading public. That is not done when words are incorrectly used interchangeably, or terms incorrectly transposed. There are many, many more choices now for the public to know-about/deal-with. The public can cope with the change but only if a spade is called a spade. Honda has an EV, it is the Fit. The Honda Accord is not an EV. It is a plug-in-hybrid (phev/pih). The term fcev in the piece is not an EV either. It is a fcv or fuel cell vehicle (today's fcv runs off hydrogen, h2, reformed/extracted from natural-gas, ch4, a fossil-fuel that usually also supplied from oil wells). While old-school hybrids (hev, they do not plug in), pih, and fcv each have electric components/guts, that does not make them EVs. It is the energy source that is put back into the vehicle: if a vehicle burns chemical-fuel, it is not an EV. The headline should be reworded for what the piece is really about: v2g, vehicle to grid.
Parks McCants wrote on December 18, 2013 - 1:01pm Permalink
Good day Bruce..So, what's your point? You're evidently light years ahead of me in your understanding of the evolution of the personal transportation mode. Congratulations... I agree with you, I do have a responsibility to my readers to not misdirect them through a false or misleading headline. There will undoubtedly be a plug-in Accord in many driver's future. But for today, I'll go with Honda's assertion that the Hydrogen FUEL CELL ELECTRIC VEHICLE, as well as the re-generating Accord is just that .. A primary electric drive vehicle. As to your view..Love to interview you sometime as to your read on the future of the EV. Thanks for dropping in.