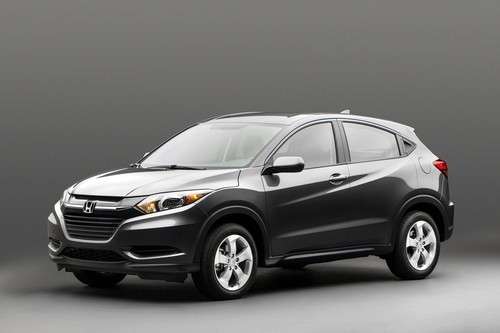 Honda 2015 HR-V takes North America back to the future

Honda resurrects a model moniker from a not too distant past in naming the latest addition to the light truck line. Honda takes North America back to the future with the all new 2015 HR-V.
Advertisement

As eagerly anticipated by Torque News, Honda introduced the latest member to the light truck line, Thursday at the New York International Auto Show. The name HR-V has a following in Japan and Europe and is recognized by many as the original high-tech mini crossover.

Surprisingly, the new HR-V's introduction was limited in scope and specification. From what we've seen, there was no grandiose unveiling, Hollywood produced Video, or kids dancing on stage with surfboards in hand. In-fact, there was no physical 2015 HR-V; it hasn’t been manufactured, yet.

We’ve covered the Japanese only Vezel in earlier articles. looking to the presented photos of the built in Mexico, Fit platformed mini-crossover, we find a rather identical twin to the Japanese version.

Fair enough, we like the concept of an economical smaller than CR-V Urbane gorilla mini- crossover, ready and willing to take on the daily battle of city commuting, inner-city parking and the occasional weekend jaunt to the Wine Country.

Honda introduced a super-mini platform based SUV back in 1997 at the Tokyo Motor Show.

Designated the HR-V(Hi-Rider Revolutionary Vehicle) in Japan and Europe, the original SUV crossover would enjoy a production run of 7 years before being discontinued. Known as the most advanced mini-SUV, crossover of the day, the HR-V came standard with a 1.6 SOHC 4 cylinder, or a SOHC VTEC engine in its Real Time 4WD variant.

And, produced one of the lowest carbon footprints of its day.

Rounding out the standard features list was a dual hydraulic pump rear differential, enhanced drive shafts and suspension, ABS, EBD braking and safety features second to none in its segment. The old-school HR-V can seat four in relative comfort while traversing bolder strewn roads or crowded shopping center parking lots.

Marketed by Honda to a younger demographic as the “Joy Machine,” the HR-V lost popularity in Japan and Europe due to its lack of a diesel engine option.

Back to the future

The 2015 Honda HR-V will fill a void in the North American light truck segment left vacant by the exit of Fuji Industries, Suzuki, Geo and under-served by Hyundai and Kia.

What many driver’s want and need in North America is a pocket-sized, highly refined, tech-rich and trouble free cross-over. Smaller than Honda’s most popular SUV, the 2015 HR-V will fill the needs of those drivers wishing for the economy and operating ease of the Honda Fit, with the capabilities of a Real Time 4WD crossover.

We are looking for real competition in this segment from Subaru. It too has super-sized the Forester to the dismay of the entry-level crossover crowed.

While Honda hasn’t released estimated pricing and specification for the HR-V, we do know that the niche will dictate a Honda quality crossover priced below the CR-V and within range of those opting out of the Fit. That equates to a beginning MSRP of under $20,000.

We anticipate the integration of the 2015 Fit’s Earth Dreams engine and the CR-V’s Real Time 4WD drive-train and off-road capability. Our readers like the idea of a Fit-based crossover. Based on the Japanese manufactured Vezel, we anticipate fuel economy to surpass 35 mpg.

Look for the all new CR-V to be released to the North America market, December, 2014.

Rick Schulz wrote on April 18, 2014 - 4:55pm Permalink
Mr. McCants, Nice review of the HR-V! Covers the important points, giving me enough information to make we want to take test drive when it is finally available. Rick