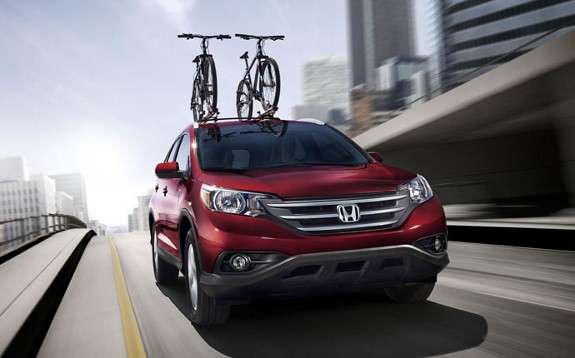 As they say, the market has spoken . In this case Honda’s affordable and reliable CR-V is the marks best selling vehicle. Year to date we note a 6.5% increase in sales with a segment leading + 10.6% in daily sales rate. Torque News takes a closer look at the numbers.
Advertisement

Think of the CR-V as the Subaru Forester of the Honda Line. This all- wheel drive light utility vehicle offers an affordable entry into the world of Urban weekend adventurism. Its economy, reliability and residual resale is legendary.

Second only in sales to Accord and Civic, the CR-V is Honda’s affordable answer to a civilized tech-rich, not-too-small,SUV. 300,000+ CR-V s were sold in North America for 2013. The trend continues.

Tough enough to take off road, refined enough to rinse off and take out on the town, the CR-V just may be the perfect utility vehicle for the new economy and a generation or two of eco-aware consumers.

We see many CR-V s in Eugene and Portland Oregon, and believe that Honda may be overtaking Subaru sales in the region. The Pacific Northwest can be tough and fuel, expensive. A perfect local for a small reliable SUV that averages 30 mpg highway on regular gasoline.

We've written much on the CR-V at Torque News Honda, and when rolling residual resale value into the equation as noted by K.B.B., we find the CR-V to be the best overall value in its segment.
A well equipped CR-V LX all wheel drive has a MSRP of $24,195, and according to K.B.B. retains 50% or more of it’s original purchase cost after 5 years of ownership..

While the CR-V has grown in dimension over the years, it remains small enough to maneuver city parking, yet large enough to accommodate a weekend’s worth of gear and provisions. For those wishing for a smaller Crossover or SUV, Honda has an answer coming in mid 2014.

Based on sales numbers for March and the 10.5 % increase in daily sales rates, we believe the Honda CR-V will be the best selling small SUV in North America for 2014.

Deborah Davis wrote on April 3, 2014 - 12:23am Permalink
Would like a Honda Crv Black with grey or black interior. Must be good on gas.
Will wrote on April 5, 2014 - 2:36pm Permalink
I bought my 2014 cr-v lx for xmas and it was perfect timing for the winter driving conditions. 3000 miles now and i can tell you that it os the best for the money and the mpg it's very realistic, in fact I think it is one of the very few vehicles on the road with a real mpg. We love the cr-v!
Parks McCants wrote on April 6, 2014 - 3:53pm Permalink
Thank you Will. Check back in with us this Summer with an update. Enjoy.
Parks McCants wrote on April 3, 2014 - 1:57am Permalink
That would be a great looking SUV. Yes, they are great on gas. 30 + mpg reported on the highway. Thanks for dropping in D.D.. When you buy yours let us know how you like it.
Faigma8 wrote on April 3, 2014 - 9:14am Permalink
Tags on your expertise and advertisement writer Bill McRea wrote in a link to another page on the salespage.
Neil wrote on April 3, 2014 - 1:13pm Permalink
Not all CRVs are AWD and none of them are permanent AWD. This is one of their biggest drawbacks. On demand AWD is no where near as effective for active safety or for use going off tarmac. The CRV has no offroad ability due to this terrible AWD system as well as no more clearnace than a regular sedan. They are also terrible in crash protection. Bullet proof motor and reliability is all left going for these today.
Will wrote on April 5, 2014 - 2:42pm Permalink
All Hondas are very safe compared to the competition. What vehicle can do 120mph in dry road or snow and also able to do a little be off-road for $24k even after 15years of daily driving in NYC traffic? CR-V.
Parks McCants wrote on April 6, 2014 - 4:01pm Permalink
Good point Will.
Parks McCants wrote on April 6, 2014 - 3:59pm Permalink
Good day Neil. Please share with our readers your PERSONAL negative experience with CR-V' s off-road performance. Granted the CR-V was not designed for blasting down a Baja dirt highway at speed or rock climbing, but, we've seen them modified to do both. My experience with " real time" all wheel drive has been a positive one. Granted, you don't have locking hubs, nor full time 4 wheel drive capabilities as to " dig out traction." I don't believe the majority of CR-V owners look for that in this mini-SUV. Note: The Forester does give you 2" greater ground clearance in stock form.
Terrence Gilhuly wrote on April 9, 2014 - 10:00am Permalink
The AWD system is intuitive and brilliant quite frankly; you have obviously never driven one in snow and ice as I did all winter. Off-road vehicle? No. Excellent crossover? Definitely.
Parks McCants wrote on April 9, 2014 - 12:16pm Permalink
Good day Terrence . Right you are.