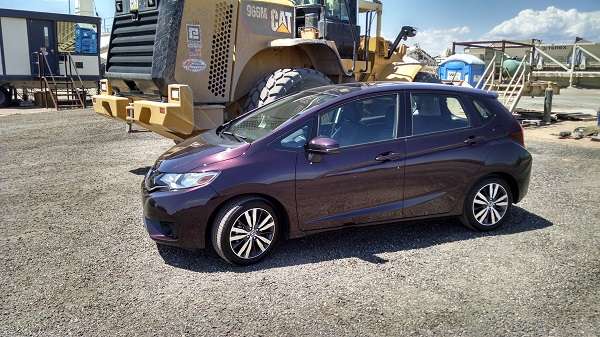 With Honda Fit sales off -50% month over month for November 2015, we look to cheap gasoline for a cause and effect answer or two.
Advertisement

American Honda Motors may point to a transitional availability of its subcompact Fit 5 door hatchback for falling sales in Novembers, I look to the price of gasoline.

Three years ago: The national news was full of doom and gloom reports as the world was supposedly running out of crude oil, resulting in a near historical, or should I say, hysterical retail gasoline pricing.

Shortly after the recession was called over, the futures price of crude oil began to fall. It now sits at near historic lows, as does the pump price of regular gasoline. As of this posting, it’s now being predicted by oil industry insiders that the “average” pump price of regular gasoline will drop below $2 per gallon, something that consumers in North America haven't seen since the winter of 2009.

During the Miami introduction of 2016 Honda HR-V, I had the opportunity to speak in length with Honda’s environmental officer Angie Nucci and Honda Division Executive Vice President and General Manager Jeff Conrad about the future of Honda’s near zero emissions, and electric vehicle development.

At that time, Torque News was assured that Honda remained fully committed to both, as Honda discontinued Insight Hybrid imports to the U.S., and shifted Accord Hybrid and some 2016 Fit production back to Japan. Last winter in Detroit at the media launch of “2015 The Year of Honda,” American Honda’s Executive Vice President of Sales John Mendel confirmed Honda’s commitment to the design and marketing of gasoline/electric hybrid and standalone plug-in EVs. ( Electric vehicles.)

As to Civic and Acura ILX, we’ll have to wait until model year 2018 to see what Honda holds in store for the Civic based hybrid variants. I did experience the 2016 Acura RLX Sport Hybrid, it’s amazing! So what’s up Honda?

looking to Pacific Northwest dealership inventory for the month of December, we find very few if any 2015 or 2016 Honda Fit 5 door hatchbacks in stock.

Perhaps the production transition from North America to Japan is taking a bit longer than anticipated. Or, 2016 Honda HR-V sales have displaced buyer interest in Fit to the point of undermining 2016 Fit sales.

I believe that the market shift from the subcompact economy sector, to the compact-midsize sedan and red-hot crossover and SUV sector to be a sign of the times, and perhaps, the untimely U.S. market demise of the sub-compact Fit.

By introducing a coupe-like subcompact crossover featuring 2-row near flat deck versatility, and an all-wheel-drive option, Honda captures sales from all demographics looking to move up into SUV-like utility, while preserving sub-compact fuel economy. Although 2016 Fit does offer its own rather quirky flavor of visual appeal, greater fuel economy and hatchback utility, it doesn’t offer AWD in North America. And that’s a big consideration for buyers in most northern regions of Canada and the U.S..

As earlier stated in this rather long-winded diatribe:The last time U.S. consumers enjoyed an average $2 per gallon regular unleaded gasoline price was March 2009. By March of the following year the price of gasoline had risen to $3.51 per gallon.

Back in late 2013, when I began my epic journalistic journey down the road with Honda, Accord Hybrid came to market, handily dethroning the king of MPG, Toyota Prius. Tokyo had a problematic Fit Hybrid, American Honda Motors didn’t import it. At that time, Honda presented what in my view was and remains the finest Accord sedan produced to date. The problem? They were very hard to find, dealers were charging a premium for them, and - Accord doesn’t come with a hatchback variant in North America. Consumers further found the inflated MSRP of the Accord Hybrid to be a bit unjustifiable in view of a falling gasoline pump price.

Hybrid and EV takes a powder

In that same year Honda Insight was taken off the market, with Acura ILX and Civic Hybrid to follow. With the repair of the U.S. and world economy came increased new car sales to near previous recession numbers.

However, due to a precipitous decrease in the pump price of gasoline, the auto industry, including American Honda Motors, pulled back the reins on subcompact and compact gasoline/electric hybrid and plug-in EV production. And, looking to the numbers, subcompact 2016 Honda Fit production.

As great of a vehicle as Honda Fit may be, as long as there remains cheap and plentiful gasoline in the U.S., the subcompact car and hatchback segment will take a proverbial backseat to thirstier, more powerful V6 powered 2 and 3 row crossover and SUV offerings. For the entry level market, we look to the 10th generation 2016 Civic, and the all new 2016 Honda HR-V to carry the sales lead.

Don’t cry for Honda Fit: It’s still one of if not the most popular Honda hatchbacks in the world. I’ve spent much seat time in Honda Fit and consider it to be one of the top 10 car purchase values on the road today. Please catch my latest Fit review here.

Dude wrote on December 15, 2015 - 4:16am Permalink
You say: "Three years ago: The national news was full of doom and gloom reports as the world was supposedly running out of crude oil, resulting in a near historical, or should I say, hysterical retail gasoline pricing." Guess what, genius. The world is still in fact running out of crude oil and the pricing is being artificially lowered currently by OPEC as a reaction to globally increasing investment in renewable energies, because OPEC wants to increase consumption of its main resource which had started sagging. The Saudis want to delay that change to renewables and dropped the prices. It's not because the world has magically discovered a new fountain of crude to last us the next three centuries. Renewables are coming! Get used to it...the same goes for OPEC. Time to end global dependence on Gulf Oil which is funding backwards regimes and terrorist groups.
Parks McCants wrote on December 15, 2015 - 11:54am Permalink
Just call me "Dude" man. And then of course there's that world-wide glut of stored crude oil "putts," with Canada and U.S. producers "fracking" away at unprecedented levels; combined with a measurable decrease in consumption, as much of Europe and Asia remain in recession. You Dude have missed the point of my article. Or like most readers scanning the WEB didn't bother reading it to its completion. The story line is a manufacturer's shift from zero-emissions vehicles to crossover and SUV production in response to consumer demand. The world will shift from fossil fuel fired I.C. engines to electric when the cost of EV vehicles drop in response to high-volume demand and resulting manufacturing practice. Peace Dude!
hondawagon wrote on August 8, 2016 - 12:24am Permalink
It's not just lower fuel prices. Many drivers want small, simple, compact urban vehicles and the Fit satisfied these needs nicely - until the massive airbag recall and the tasteless restyle. My 2011 Fit was recalled in 2016 at NHTSA's orders. I was told the airbag issue was "life threatening." Did Honda not know years before? As for styling: the Fit has moved from simple sheet metal to heavily sculptured side and rear panels that are hell to repair after even a small dent. The dashboard is cluttered and trimmed in plasticized 'chrome.' All in all, not a very attractive package that is - as a final insult - assembled in Mexico. I can understand why US consumers are balking ...
Parks McCants wrote on August 8, 2016 - 11:44am Permalink
All true, however Fit sales are trending back up as fuel prices rise and manufacturing returns to Japan. As to the car's styling, that's a personal assessment. The airbag issue is the broadest reaching recall since the advent of the car with 100,000,000 vehicles of all major brands included. I don't believe that Honda new anymore or less than the others. Take care.