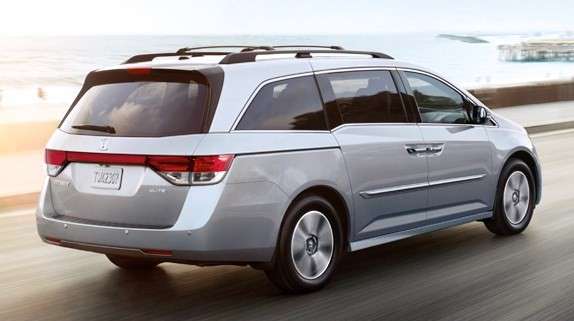 As reported by Honda News Wednesday morning, 3 out of 6 of the top selling automobiles in North America wear the Honda big “H.” Why is Honda Odyssey the best selling minivan in North America? Torque News looks for an answer or two.
Advertisement

Back in the day, old school, Dodge Caravan and Chrysler Town and Country was the #1 and #2 best selling minivans in North America. For well over 2 decades If one wanted a comfortable, safe and relatively pleasant to drive family hauler, featuring car-like driving characteristics, they would inevitably turn to Chrysler.

The reasons for the dynamic design shift in the evolution of the minivan varies. However, most experts point to the lower-aerodynamic-wind-friendly body contour and rear hatch utility of Dodge Caravan as the originator of what we generally perceive as a “mini-van” platform today. Dodge, Chrysler was the first to take minivan design past the evolution of the station-wagon, van want to be.

Chrysler Corporation was the first maker to integrate creature-comfort, car-like driving and handling characteristics into the minivan classification. General Motors’ Pontiac Division and others would soon follow with low profile, close to the ground minivan-manifestations; only to fall by the wayside as the world-recession and crossover popularity pushed consumer demand for the minivan to the roadside.

It was long-time segment leader Chrysler Town and Country that set the stage for a minivan resurgence, of unforeseen consumer demand and timeline duration. Today, Honda Odyssey and Toyota Sienna are #1 and #2 in the game with Chrysler Town and Country taking a back field position at #5. Odyssey, while not the top seller in Honda’s lineup, continues to be the top choice for consumers wanting a comfortable, trouble-free work task and family hauler.

Interestingly enough, the #1 selling minivan in North America is not the least expensive to purchase

One could point to price-point as the prime reason behind Honda Odyssey's segment supremacy. However, that’s not the case. In looking to the numbers, Odyssey's initial base MSRP of $28,975-$44,600) is higher than some if not most make and model offerings in this segment. Entry priced within pennies of a mid-trimmed #2 Toyota Sienna, according to vehicle registration numbers for 2014, Honda Odyssey outsold Sienna by 40,000+ units. That’s a big hit! You may read 2015 Odyssey price and specifications here.

Odyssey takes the segment with superior fuel economy, standard features, ride and car-like handling characteristics and a slightly higher residual resale value. Looking to our reader’s commentary, the first time many drive Odyssey, they express surprise as to the smaller car steering nimbleness, city maneuverability and tamed, car-like handling experienced behind the wheel of Odyssey. Many owners believe Odyssey to be the best long-trip vehicle on the planet. And yet, for 2015, Odyssey retains the utility and interior load hauling volume, passenger capacity and towing capacity(3500 lb) of a much larger utility van.

A bit about 2015 Toyota Sienna

Where Odyssey can’t compete with Sienna for 2015 is in the AWD(all-wheel-drive) option. Honda doesn’t offer it. Although admittedly, Honda’s traction control, limited slip differential does is a commendable performer in most if not all weather conditions. While Odyssey offers a superior HondaWatch ™ electronic accident prevention suite, Toyota features second row Captain Chair seating with extended(Lazy-Boy) where’s the remote control comfort features.

The measurement of brand and quality trade-off is made yet a bit more tedious with Toyota’s slightly higher horsepower and torque rating Vs Honda’s superior average MPG.

From a driver’s point of view, that has had the opportunity to drive all Honda and competitive model market offerings, looking Odyssey, we've yet to identify a greater, overall automobile ownership value presented in minivan form. However that’s just a qualified opinion: When comparing Odyssey to Sienna, it’s a close call. For serious buyers anticipating long-term ownership (5 to 6 years) with their next minivan purchase, we suggest cross-shopping the two.

Note: Odyssey went through a major upgrade and redesign for 2014 and is unchanged for 2015. We see this as a purchase opportunity for buyers looking to save a few $.

Jeff wrote on February 19, 2015 - 3:27pm Permalink
unfortunately it looks like a funeral hearse... yuck
Parks McCants wrote on February 19, 2015 - 5:57pm Permalink
How's it going Jeff? Interesting observation. Yes, I suppose dressed in black wit a handful of chrome and brass embellishments it could double as one. That's the beauty of Odyssey, highly transformable. Take care.