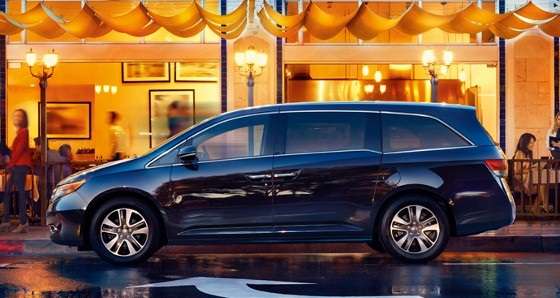 14 years and counting, the # 1 minivan in North America also holds the record for consecutive safety awards. On the eve of the Tuesday announcement, Honda and Accord now hold the most NHTSA, IIHS 5 Star safety awards for any automotive brand sold in North America.
Advertisement

Yes, we know, our readers may be growing tired of Honda blowing its own horn when it comes to vehicle safety. But then again, what’s more important when choosing to purchase a specific new or used car or truck?

While not providing the exhilarating ride of a CR-Z Hybrid or Civic Coupe Si, the Odyssey provides safe transportation for thousands of commuters and families while doubling as a mobile office, transformer and construction tool hauler for countless others.
The Odyssey minivan is good at what it does and looks good doing it.

My personal assessment of the Odyssey is a mixed one. But, I must say that I do find the vehicle to be extremely solid,sure footed and comfortable. I recently spent 2 days on the back seat of a 2009 Honda Odyssey. Although the minivan showed 60,000 miles on the odometer, the vehicle remained as tight as the day it left the Honda showroom. We've had readers report to Torque News that their Odyssey is still going strong with 170,000 miles on the odometer. We have no reason to doubt the claim. Think of the Odyssey as Honda’s Ford LTD station wagon.

Utilized previously as a client courtesy vehicle for an Investment firm, the minivan has spent most of its life on the busy surface streets and highways of Vancouver Washington.

I found the 2nd seat of the Odyssey to be excessively roomy. Featuring great head height, leg and shoulder room, the view afforded the “backseat” passenger of the Odyssey is literally unobstructed. At 6” 5’ I found sitting in the 2nd row of the Odyssey to very comfortable and most pleasurable.

looking to the fit and finish of the interior as well as the passenger friendly features, I found the positioning of air and heat duct shutters, fan speed turn knobs and touch on and off overhead lighting to be reminiscent of a large airplane cockpit. The interior trim and carpet interface was flawless. The seats? Perfect. Needing quick access to the rear cargo deck, I discovered the one hand, lever action folding seats; they work very well. Also noted was the invisible “kid lock” setting on the sliding side door. In the lock position the door is rendered inoperable and then closed.

On the downside, I find the ride of the Odyssey to be rather truck-ish, with a bit more tire and road noise than I would like to experience. Looking to the “flush” rear storage deck, it becomes apparent that noise transfer is via the rear wheels and tires. While Odyssey's low profile adds to the overall good looks of the vehicle and increased fuel economy; through better aerodynamic drag coefficient, than say a Ford Econoline Van, the shortened distance between seating area and road bed results in a higher interior noise level in the 2008 Odyssey.

But then again, I did not have access to the 10” pull down theater monitor or the “ noise cancellation” available in the 2014 Odyssey Tour.

I did like the ease of entering and exiting the Odyssey through its soft pull automated sliding side doors. I was also taken by the minivans conservative approach to fuel consumption. On my watch, the Odyssey averaged over 24 mpg in mixed coastal and two lane driving. We recommend the Odyssey for anyone requiring a Honda larger than an Accord and smaller than a Pilot.