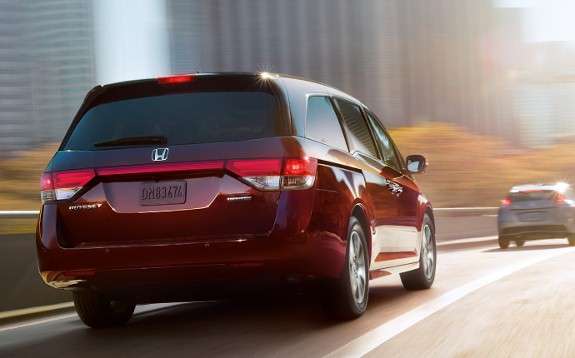 Once again, Odyssey’s innovative Hondavac has edged out the competition. We take a closer look at News and World Report’s annual "Best Minivan for Families" award, and why we believe Odyssey is the highest rated minivan in North America.
Advertisement

Honda Odyssey is the #1 selling minivan in North America.

Somewhere along the timeline, the former reigning queens, Dodge Caravan and Chrysler Town and Country were left in the dust of the Great Recession. None the less, they still exist, and when comparing minivan models, Toyota compares its Sienna minivan to Odyssey, Caravan, Town and Country; in that order.

Honda takes a different swipe at the competition by leaving Dodge out of the mix and adding Nissan. In either order of review, the Toyota Sienna at first glance appears to be a not too distant cousin to the Honda Odyssey. Comparable in price and standard features, it takes a very close look to determine which vehicle provides the greatest value for the dollar spent.

While Sienna sports a lower base price than the Odyssey, looking to Toyota’s blatant lack of transparency as to ‘standard features’ and add-on, build your own up-charges, Honda takes the lead based on greater fuel economy, standard features, and in our most humble opinion, a superior exterior design.

We like the Odyssey at Torque News. In Fact, our publisher owns a Honda Odyssey and holds it in high regard. He loves it for its safety, utility and comfort while transporting his precious cargo( kids) on their daily adventure. According to Armen the Odyssey provides trouble free service and does so economically. He likes the overall quality and wearability of America’s favorite family mover.

Would he buy another one? Probably, let’s ask him in the comment section below this article.

This author has a 2009 Odyssey Tour in the family and can attest to the long-term functionality, durability and reliability of a 5 year old Honda product with 88,000 miles on the odometer. It runs as well and as tight as it did the day we drove it off the lot. It’s easy enough to maneuver on tight country roads and the mid row seating is unusually comfortable.

While the Odyssey doesn't offer the acceleration and handling of a Civic Si or Type R, it does pretty well through the tight turns, offering ample passing acceleration, while plying the Freeways.

Back to the news.

For the fourth year running, “News and World Report” has recognized Odyssey as the “Best Minivan For Families.”

Once again one of the simplest, no brainer, innovations has catapulted the Odyssey to the winners circle.

We’re confident that the most technologically advanced, people friendly, surround sound theater equipped people mover on the planet, offers a bit more to the prospective owner than a built in shop vac. Actually, we’ve written several positive reviews on the 2014 Honda Odyssey.

We’re afraid that we proudly fit into the category of the professional auto critic that has favorably reviewed this Honda. While it doesn’t sit heads and shoulders above the competition in all categories of comparison, we do find that the low aerodynamic lines of the Odyssey to positively detract from the minivan prototypical label associated with taller people movers.

The aerodynamics as well as Honda’s superior engine management system affords the highest rated mpg( 26 highway) in the segment while reducing buffering and wind noise.

Its relatively small dimension, while fully capable of seating 8 (a stretch) lends itself to an ease of drive-ability suited for those of smaller stature. This, in combination with the standard back up camera and lane change warning safety integration, adds confidence of operation for the pilot while performing multiple daily tasks. And, it looks good doing so.

Rather on the town for a night out or taking the kids and friends to a soccer match, the Honda Odyssey wins hands down based on greatest value for the dollar spent, with the bonus of the *highest residual value in its class after 60 months of ownership.