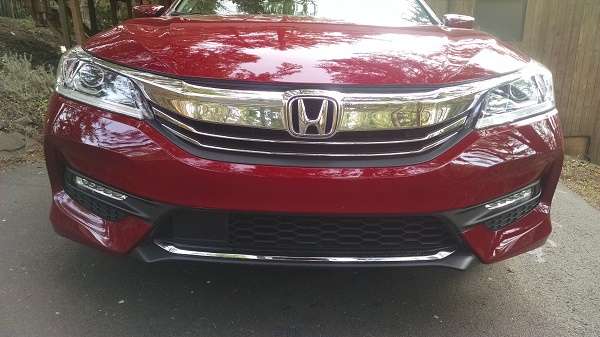 American Honda to turbocharge, electrify 2017 Accord and CR-V

What does a turbocharged, electrified future look like for Honda owners?
Advertisement

As announced Wednesday by Honda Motor Company President and CEO Mr Takahiro Hachigo, 2017 Honda Accord and CR-V SUV, the best selling SUV in North America will come to market with a turbocharged engine option.

Regardless of the present unrealistically low pump price of unleaded gasoline, those in the know, Including the research guys at A.H.M.C., realize that when it comes to commodities, what goes down, must go back up to maintain the market momentum. And then there’s that C.A.R.B. target of sooner than later ZERO exhaust particulates emissions -- all pointing to a super low emissions, high to no fuel efficiency future,

Honda Motors fully intends to meet or beat the emissions target by averaging near zero emissions achieved through the implementation of small displacement, high output turbocharged engines, as found in the all new 2016 Civic Coupe. Also promised by president Hachigo is stateside delivery of the manufactured in Japan 2017 Accord gasoline/electric hybrid -- my personal favorite Accord.

The advantage to the consumer is two fold: Higher engine performance, greater fuel efficiency -- something that Honda continues to do very well.You may read Mr. Hachigo’s statement here.

And then there’s the timely launch of the next generation Clarity FCEV. (Fuel Cell Electric Vehicle) It’s all going to happen, first in Tokyo, then in Los Angeles. As I said, sooner than later. What’s even a bit more exciting for this gearhead is the Honda, General Motors co-development of the next generation fuel cell generator. GM’s looking to 500,000 units on the road in the next decade.

According to Honda, by the target year 2030, 70 % of the Honda Fleet will be electrified, in one way or another. I’m looking to plug in electric vehicles to comprise most of the fleet. Presently, less than 5% of all Honda offerings are electrified.

While there’s talk of a possible hybrid 2017 CR-V making it to North America, I doubt it. Looking to present CR-V average MPG, the highest in the compact class crossover segment, utilizing the 1.5 Liter turbocharged Earth Dreams ™ VTEC gasoline engine for 2017 CR-V motivation would not only increase CR-V horsepower and torque specifications, but most likely increase fuel efficiency by a percentage point or two.

Zoom wrote on February 26, 2016 - 5:01pm Permalink
Irregardless isn't a word!!!
Parks McCants wrote on February 27, 2016 - 12:05pm Permalink
True enough Zoom. My grandfather would agree with you! http://blog.dictionary.com/is-irregardless-a-word/
Ricktoid wrote on March 28, 2016 - 10:38pm Permalink
Yes, it is.
James Moore wrote on March 17, 2016 - 4:02pm Permalink
The 1.5 L turbo engine in the civic = 174hp/162 lb torque. The current CRV = 185hp/181 lb torque. The engine would not increase hp or torque over the CRV current engine. Unless referring to a different engine.
Tom Eisenmenger wrote on April 19, 2016 - 1:57pm Permalink
Turbos generally generate more usable torque at lower RPMs. The new EarthDreams 2.4L four in the Accord has less hp and torque than its predecessor but has noticably better acceleration due to the torque coming in lower in and more consistently throughout the powerband.
don wrote on March 25, 2016 - 12:06pm Permalink
downsized turbo engines never hit their advertised MPG. Putting a 1.5T in a CR-V is just going to have it on boost sucking gas constantly for normal driving. I had a 2.3T RDX that was supposed to be more efficient because it was a turbo 4 instead of a 6, but it sucked gas like no tomorrow. And shockingly, the newer RDX went back to much more efficient NA 6 cyl, which is a gem in both power delivery and relative economy.
Parks McCants wrote on March 28, 2016 - 3:05pm Permalink
Welcome don. Actually, the 10th generation turbocharged Civic CVT Touring has a higher average MPG than the normally aspirated 1.8 Liter 9th generation Civic. Engine/transmission technology continues to evolve. As you may know. 2017 Acura MDX will come to market with a turbocharged/hybrid propulsion unit claiming an increased +7 mpg city. It will be interesting to see what the future brings. Thanks for your thought provoking comment.
nonya wrote on February 8, 2017 - 8:39am Permalink
The mpg on my ex t is dead on all the numbers. It has a whole lot to do with how you drive.
Chris wrote on April 12, 2016 - 1:13pm Permalink
I have to agree with Don, while a small turbo will indeed get a better EPA rating a slightly larger normally aspirated engine will often perform better in the real world. This can also carry over to vehicles with over worked 4 cylinder engines versus a V6. Good example of this was the last generation Toyota Rav 4 when the V6 was still an option. I currently own a 2014 Accord EX with a manual transmission and it actually beats the EPA ratings on a regular basis and I enjoy the torque off the line that turbo cars usually lack. I know I am in the minority, but I would love to see a performance version of the Accord Sedan with a manual transmission. (no, the current Sport doesn’t qualify) Take the EX-L trim with a V-6 and add a manual tranny and call it “sport touring” and I would buy 3 of them to last the rest of my life.

Tesla Contemplates A New Strategy for China Retail even As Sales Boom
Jay Leno on Elon Musk & EVs: “I Think He Should Get ... Credit"
END_OF_DOCUMENT_TOKEN_TO_BE_REPLACED