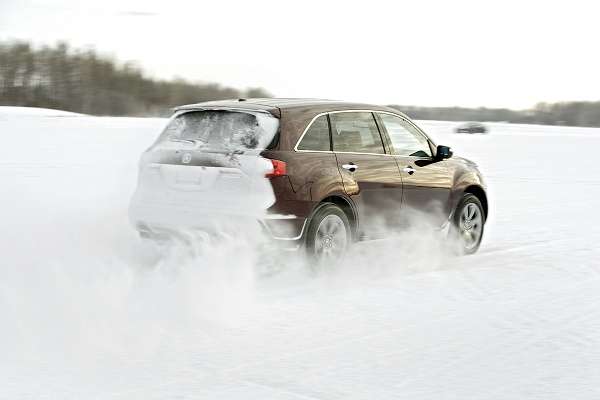 Acura MDX/TLX takes on snow and ice with SH-AWD

Coming off of a week of hazardous freezing rain and subsequent killer road conditions in Western Oregon, we explore Acura’s answer to safe driving under torturous conditions. I look to MDX and TLX for an answer or two.

Granted, although I personally own and drive a full-time all-wheel drive Pacifica crossover, I rarely encounter severe Winter weather road conditions. The second week in December brought sleet, hail and then frozen rain to the outbacks of Eugene, Oregon -- it was a wake up call for me and countless others as ice laden trees crashed to the ground or worse.

Frankly, I’m a qualified foul weather driver. However, while I did make it into town for much needed supplies, on returning from town, driving back up our 16% grade paved road to the house was a bit dicey at best. You know, a bit of traction loss; a side slip darn near into the drainage ditch; and a slip and slide into a neighbor's fence, (darn near) not good! Read my 'back seat' MDX drive review here.

Granted, I’ve spent more seat time in Acura and Honda offerings than most review journalist out there. However, other than driving on a sanded and plowed road (no salt in Oregon) outside of Portland, Oregon in a 2016 MDX Advance, and sever rain in MDX and TLX, I’ve had ZERO snow time in either offerings. So, in searching the internet I found a well written account of a TLX SH-AWD family adventure to the snow of Lake Tahoe, one of my favorite short vacation spots.

In this article, the author Josh Jacquot shares his experience behind the wheel of Acura’s 9-speed, V6 motivated TLX SH-AWD Advance while driving in the snow. Cool stuff. He discovers the advantages of a 9 speed transmission and wheel mounted shift paddles often maligned by the automotive press. In short: Superior traction! Personally, TLX is one if not my favorite daily driver. I drove it on the freeways of Los Angeles here.

Temple of VTec takes traction competition to the next level

I’ve spoken in length over the years with Honda, Acura engineers as to the rigors of severe weather testing in Minnesota. Looking to the Video, MDX kills it in this steep grade traction video. Super Handling All-Wheel-Drive works, even when driving uphill on ice.