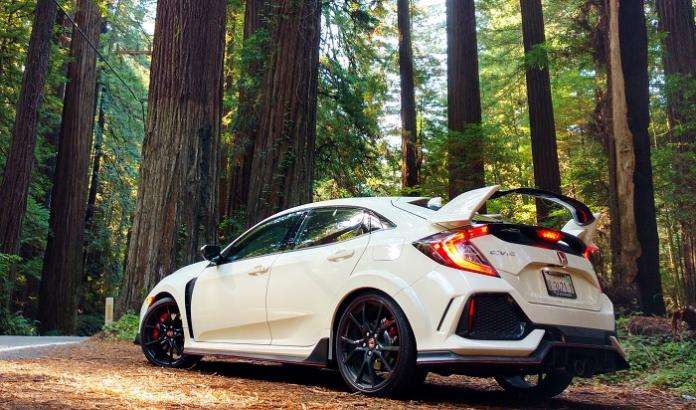 At a time in the auto industry where all major manufacturers including Honda load up sub premium offerings with what was considered recently as premium features, 2017 Civic Type-R holds on to a lot of “old-school” technology for their compact hot hatch.
Advertisement

After a week in the seat behind the wheel of 2017 Civic Type-R, I can attest to the fact that Honda’s ultimate Civic hatchback is fast, very road worthy, and comfortable on the long run. One learns much about a car in the first week or so of ownership. Great on the track, fantastic on the road, 2017 Civic Type-R grows on you.

So, since we’d begrudgingly return our Civic Type-R loaner to Honda within the week, I compressed 900 miles of mixed driving into a 48 hour turnaround; immediately discovering a feature or two that I believe would make Civic Type-R a more comfortable, safer, and easier to drive hot hatchback. Simple really, look to the balance of the Honda lineup for a no-brainer upgrade or two.

While manual shifting is second nature to me and others that learned to drive with a stick shift and clutch, Civic Type-R would be better off without one. Don’t read me wrong here, the 6-speed manual transmission, 3-drive mode, limited slip differential featured in Type-R is a beautiful thing -- but so was my Norwegian grandmother -- she’s no longer with us.

Granted, it’s cool to hold a shift point to the 6800 RPM rev limit of Honda’s 2.0 L fuel injected , turbocharged VTEC Earth Dreams marvel. Yet, try as hard as Honda engineering does to eliminate torque lag due to shift time; there is some, and, there doesn’t have to be. Honda manufactures some of the finest dual clutch 8 speed automatic transmissions on the planet; steering wheel mounted paddle shifting included. I believe that at this day in age, Civic Type-R would be a better car for it. I begin my journey to California’s epic Coastal Redwoods.

Enough already with the slides, give me a power adjusted , heated driver’s seat and wheel

I’ll come straight out and admit that the 2017 Civic Type-R high bolstered racing seat looks very cool covered in suede-like Honda red and black synthetics. The Recaro look alike is comfortable to a fault. Although a bit tight at the hip for many would-be Type-R buyers over the age of 21.

No worries, I completed my 48 hour road trip largely unscathed due to the memory-foam like fit and feel of the seat, and general seating position of driver to wheel. However, on 4 to 5 hour runs between fuel stops, I longed for the infinitely adjustable power seat -- not available in Civic Type-R. In-fact, other than a manual slide adjustment, seat back tilt, and height adjustment manual crank, what you see is what you get. The front passenger remains on the floor. Hey, it’s not horrible, it could simply be improved with automation. 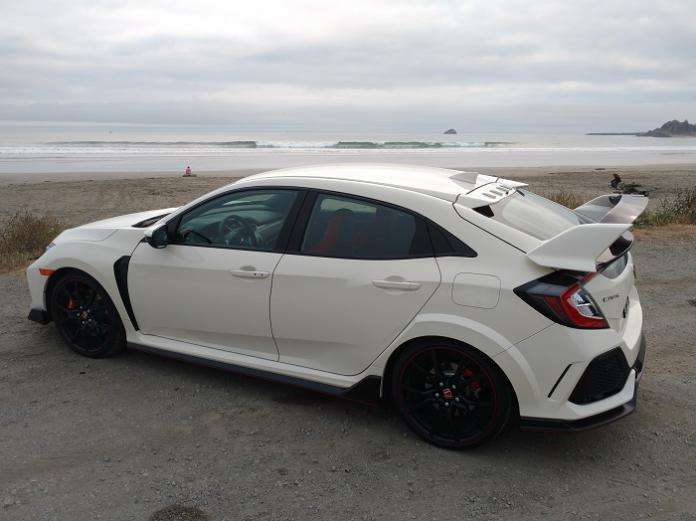 Honda is a pioneer in sensor, radar activated active safety features, we find none in Civic Type-R

Granted, you don’t find state of the art Honda Sensing ™ active safety features and accident avoidance technologies on track cars, that’s a given. But, Honda proudly classifies Civic Type-R as a “Touring Car,” and indeed, I found it to be very comfortable on the long run; something that pocket racers generally are not. That’s where things for this Honda fan become just a tad fuzzy.

So, Civic Type-R has that going for it! Returning from a recent press event on Washington State’s Puget Sound, I found myself in the company of some pretty heady journalist company; this is where the heated seat, steering wheel suggestion came up. The journalists hailed from Detroit, home ground for the original engine block heater. Civic Type-R could take an upgraded package cue from this car.

Here’s the thing: Honda Motor Company rightfully takes pride in presenting a standard-feature-rich offering; more car, less money. In its initial launch trim, 2017 Civic Type-R comes to the United States with a very simple “build and buy” shopping tool -- what you see is what you get -- there are no options outside of color choices.

I’m suggesting that a hand full of options be offered in an intelligent Touring Edition. The gentleman, or gentlewoman club car Type-R. I’m confident that consumers will pay $2 or $3 grand for the uptic. Power Moonroof anyone?