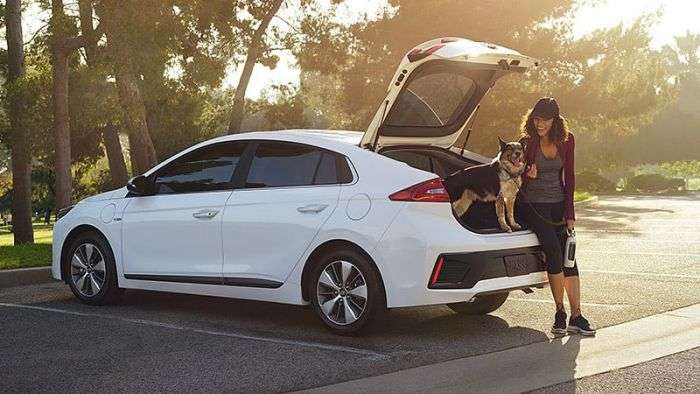 The 2018 Hyundai Ioniq trilogy brings several eye catching design cue’s to the compact hybrid segment, yet it’s not as edgy as Toyota Prius, or as drive range restricted as a battery electric car.

Hyundai, while not the first global auto brand to present 3 variants of electrification under one name plate, Honda Clarity does it well, so does Toyota Prius, it may very well be the most financially attainable-- and certainly the most comprehensively warranted car in its class. Yet, as with all new car offerings, it’s the initial curb-side eye appeal, and behind the wheel drive and ride experience that will sell Ioniq, electrified or not.

Base model 2018 Hyundai Ioniq, is affordable, and comprehensive

This is part two of our 3-car Hyundai Ioniq test-drive-trilogy, with our first being the reasonably priced, and extended drive-range Ioniq Battery Electric. Last November, we experienced Ioniq electric for the first time in cold weather. ‘Impressive’ Is an understatement. The downside to 100% battery electric motivation for most consumers is charge range, and cold-weather drop in battery charge capacity. Ioniq PHEV eliminates the what if?

Hyundai, like Chevrolet, Honda and other makers, remove range anxiety from the purchase consideration equation by combining small displacement 4-cylinder gasoline engine power cogeneration with a grid-electric charged battery module, control, and multiple electric motors. The beauty that is Hyundai Ioniq,comes in the form of a seamless transition between engine, and electric motor power. And, with the option of plug-in battery module charging, with a bit of planning, many consumers will and do drive Hyundai Ioniq electric-only on their daily commute.

Under real-world driving conditions, Torque News drove 2018 Hyundai Ioniq PHEV for the better part of a week on 6 gallons of gasoline -- that week we drove well over 600 miles of mixed city and highway driving. Furthermore, we did find 29 miles electric only by manipulating the regeneration steering wheel paddles when driving down hill. At one point, we gained 2 miles of range by simply paying attention to the power monitor. We didn’t baby Ioniq, nor were we Hypermiling.

Discovering “sport” mode in Ioniq was an eye opener.

Granted, most EV advocates aren't out to beat a Dodge Charger off the light. However, when compelled to do so, and set to sport mode, Ioniq PHEV borders on exhilarating -- it’s fun to drive, fuel efficient, and surprisingly nimble.

Thanks to a well designed suspension, exceptional dampening, and a low center of gravity, Ionic handles well under most driving and road conditions. We found cabin ergonomics and seat comfort more akin to a midsize car, with all controls, monitor placement, active safety features, and smart wheel controls top of segment.

I like the overall look and feel of Ioniq’s cabin, the utility of the hatchback accessed split, fold down second row seating, and astounding fuel efficiency. We noted 55 plus MPG on regular unleaded gasoline, and 110 eMPG driving under mostly wet driving conditions.

Ioniq is a bit cabin noisy on certain road surfaces

Hyundai, like all Battery EV, PHEV, and FCV car makers,opt for special tire compounds in the quest for higher fuel efficiency. The low-friction-rigid-sidwal tire construction results in greater tire generated road to cabin noise transfer. I’ll give up an MPG or two for a quieter drive and ride experience. Believe me, the annoyance is not exclusive to Hyundai Ioniq. Regardless, I give Ioniq PHEV high marks for initial and long term ownership value.

I recommend a comparative test drive between Ioniq, and Prius, for anyone considering the lease or purchase of a compact hybrid hatchback.

Jon Gazave wrote on May 1, 2018 - 11:25am Permalink
"Rigid-sidewall-tires" decrease rolling resistance while increasing mpg. This is not how high efficiency tires are designed. Performance tires are usually low profile placing an emphasis on handling at the expense of road noise, comfort, and efficiency. Those are the tires with relatively "rigid" sidewalls, if for no other reason than limited movement from the limited size of the sidewall.
Parks McCants wrote on May 1, 2018 - 6:58pm Permalink
Welcome Jon. Michelin Tire, Good Year and other major tire manufacturers are investing $ millions in developing the "perfect" EV tire.
Glenn Zevallos wrote on May 4, 2018 - 11:16pm Permalink
I want to know how committed Hyundai is to the Ionic's Lifetime Battery Warranty. The replacement cost of the battery pack usually consumes whatever money was saved on gas during the life of the hybrid car.