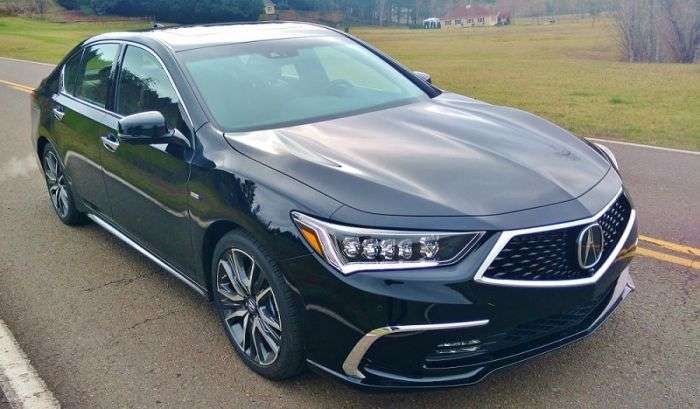 Last Tuesday we returned our 2018 Acura RLX Sport Hybrid Advance loaner to the press fleet. After spending a week in the seat behind the very smart wheel of Acura’s flagship premium sedan, we walked away with an impression or two, mostly positive. We’ve reviewed Acura RLX Sport Hybrid for 4 model years running.

Although RLX Sport Hybrid is (mostly) mechanically carried over for 2018, it has received a major body design refresh, and an uptick in convenience and safety features -- top of class in several applications. We’re scratching our collective heads as to why we don’t see more of them on the road. Acura RLX is much more than a redesigned grill and pretty headlights.

RLX is Impressive to say the least, in a massive Acura sort-of-way. We find 2018 Acura RLX to be drive-time-contagious, comfortable, and fuel efficient. Thanks to super handling all wheel drive, and an optioned 2nd generation gasoline/electric motor hybrid drivetrain, the rather full size RLX as equipped, drives and handles like a nimble precision sport sedan while driving in town. 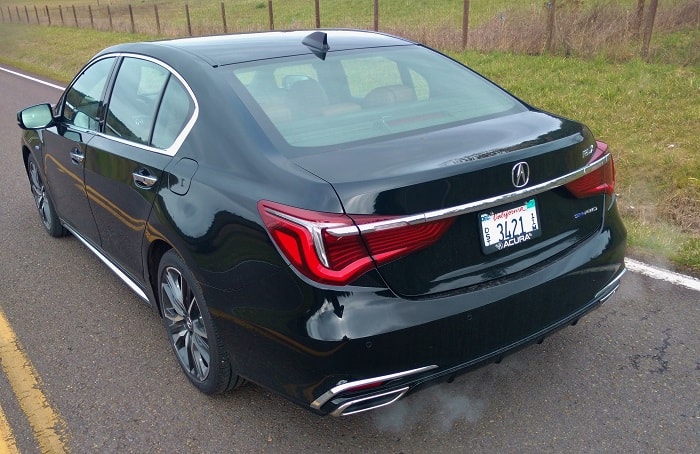 Note: I went out of my way to break traction on wet surface streets--RLX held the line, and, was very sticky while driving the back road two-lanes at high speeds. Don’t read my wrong here. RLX is not a 600 horsepower sport sedan, put it is playful, when called on to be so. I believe that RLX has been largely underrated by the automotive press. When I look to the total comfort and convenience package that is RLX, as priced, 2018 Acura RLX is a premium bargain in both trim levels. That’s correct, there are only 2.

The dealership sales challenge with Acura RLX is the MSRP, it’s not expensive enough

That’s where the RLX perspective buyer consumer perception comes to play. RLX has a glaring public relations problem that has nothing to do with its body styling, interior finish, or overall drive performance. In speaking with our Acura dealer connections, they tell us that when a well heeled perspective buyer compares Acura RLX to Audi, BMW, Cadillac, Lincoln, Mercedes Benz and Jaguar, RLX has a price advantage. So, why doesn’t Acura sell more of them?

Some tech-savvy drivers may find RLX to be a bit “old-school.” But then again, what RLX lacks in state of the art electronics, it does make up for with premium features -- a fantastic Krell surround sound theater quality stereo system, butter smooth leather interior, theater-like mood lighting, and perhaps the brightest wide-spectrum diamond projector headlights found in the segment today.

2018 Acura RLX is recognizable day and night as an Acura

The overall ride comfort and drive dynamic of RLX is superior to much of the competition in the sum of its packaging. Its spacious interior at times is library quiet. We find little to no fault with RLX.

Here’s the public relations problem: With a suggested MSRP of $54,900 (RLX standard) to $61,900 + RLX Sport Hybrid, buyers shopping in the high 6 figures, find RLX to be suspiciously under-priced. For some, it comes down to premium priced, premium car bragging rights. In speaking with a handful of Acura sales executives, RLX doesn’t sell in higher volume simply because it’s priced too low.

2018 RLX wrote on March 7, 2018 - 9:04pm Permalink
The RLX can't compete as a full size sedan because it's not. 6 figure customers want a trunk larger than 12 cubic feet, massaging seats, adjustable rear seats, etc and they are not going to shop at Acura with a midsize sedan when they want a full size. If Acura cannot move RLX at their current price, raising the price will ensure the demise of the vehicle, that's basic economics 101.
Parks McCants wrote on March 7, 2018 - 10:29pm Permalink
Welcome 2018 RLX. The comentary expressed in this article is based on conversations with several Acura sales associates. As prices, RLX is a unique road-sticky drive and ride experience. Drive RLX Sport Hybrid and get back to us with a qualified opinion. Cheers!
Ed B wrote on October 8, 2018 - 12:39pm Permalink
Quite the contrary - it's over priced. The RLX hasn't been popular since the 2006 version. Why is that? It was affordable luxury then and was a very good alternative to the luxury brands of that day - and far more reliable that the German luxury cars. Since then, the RLX has struggled with an identity crisis and poor designs. Today, it probably still offers a better value over it's competition, but now is priced outside the realm of affordable luxury.