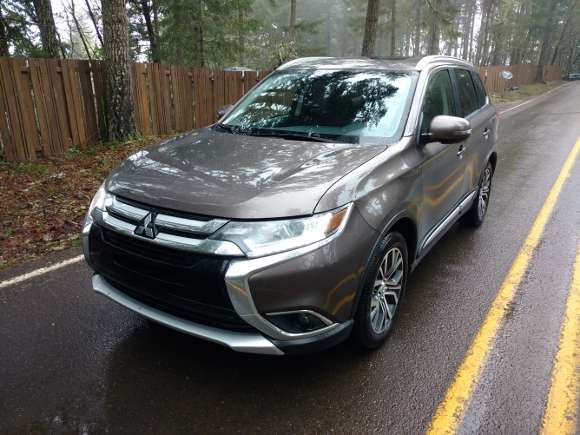 It’s that crazy thing that happens in the blink of an eye while driving through a torrential downpour. The jackass in the right lane just a made a lane change without signalling at 70 MPH. Deadly! 2017 Mitsubishi Outlander S-AWC just saved my life!
Advertisement

2017 Mitsubishi Outlander Super Handling All Wheel Control just saved my life. So it would seem. Here’s the story: The first week in February found me spending as week behind the wheel of a brand that doesn’t receive enough attention in most of the United States. Truthfully, after driving the now defunct Mitsubishi Lancer, I believe the maker to be much under rated. I suppose I could blame it on Mitsubishi Public Relations, but more likely the direction Mitsubishi Industries is steering the manufacturing giant in North America.

Nonetheless, I was pleasantly surprised to take delivery of the rather good-looking 2017 Mitsubishi Outlander SEL 3-Row compact SUV, one of the few if not the only compact 3-row SUVs available to North America. No, you won’t find headroom in the 3rd row for a full size adult, and getting back there is a bit of of a challenge, but for the kids, family pets, billy’s goldfish, or grandmother, in a squeeze, it’s perfect!

Visually, Outlander is well proportioned, slippery, very well equipped and reasonably posh in driver and passenger accoutrements -- premium, power adjusted and heated, leather covered seating options, a nicely sculpted, well balanced dashboard and center stack, as well as a surprisingly good infotainment, stereo system. I found Outlander’s 4 cylinder engine and CVT transmission to work well under all driving and road conditions -- Outlander’s ride is not too stiff or truck-like, yet stays stable in the twisties, and floats with confidence over the well worn highways of Oregon. For a normally aspirated 4-cylinder engine, (V6-option available) I found off the light, and passing-lane acceleration to be excellent. The driver’s seat IN Outlander SEL is power adjusted, leather clad, heated and comfortable. I find it to rank with the best offerings in the compact SUV segment. As to interior quiet, it’s reasonable, but a bit tire-compound, road-surface sensitive at times.

Truthfully, after experiencing Outlander from behind the wheel, I believe it to be more than a bit underrated when compared to Honda CR-V and Toyota Rav4. While (perhaps) not as tech-driven, segment groundbreaking as either, 2017 Mitsubishi Outlander offers one or two things that the competition doesn’t do.1. S-AWC ( smart all wheel control. 2. A third row option. 3. The lowest beginning MSRP ($23,495 + FWD) in the compact SUV segment. 4. 10 year, 100,000 mile limited warranty. FInd price and specifications here.

VIsibility is good, however, the driver’s seat is set a bit close to the headliner for clear signal light viewing, and when set in the far back position, remains tight to the dash kicker for taller drivers, with a bit of a down reach to the steering wheel. I would guess that Outlander is optimally fitted for driver’s of 6 foot 2 inches or shorter -- my wife loved it, and that brings us back to the headline. Returning from Portland, Oregon, 6-inches of rain fell in one hour

This is where that S-AWC (Super Handling All Wheel Drive) comes into play. Mitsubishi comes to the crossover/ SUV segment with decades of all-wheel-drive experience. The MItsubishi Lancer Rally Car is legendary. Without going into great details as to how S-AWC works, the short story here is that torque vectoring, and electric assist ABC brakes, come into the equation for optimal road control -- it absolutely works.

Oregon Interstate 5 is 18 wheel heavy truck bound, cracked, rutted and unforgiving. Although the posted maximum speed limit in most corridors, ranges from 65 to 75 MPH, fools like to push the limit well into the 85 MPH range, and rain in Oregon doesn’t slow them down much.

HIgh-speed and weather-related low visibility exasperated an already bad driving condition, as we headed south toward Eugene, Oregon from Portland on a Sunday Afternoon. About 35 minutes into the late Sunday afternoon drive it happened! Traveling in the far left lane at 68 MPH, a Honda coupe of undisclosed model year and general condition appeared in the passenger sideview mirror.

And then without signalling, the jack-ass made an abrupt cut-off maneuver, transitioning bumper-to-bumper into the left lane while passing -- no acknowledgement noted. Making a stunningly effective quick left turn onto the rolling medium, at close to 70 MPH, while driving in a blinding downpour, I fully anticipated “hitting the wall” Indy style, yet our Mitsubishi Outlander corrected without so much as a traction slip -- astoundingly good!

After discretely checking, and adjusting my underwear, Nancy and I completely the journey south in relative silence. Sure, with over a million miles driven during my lifetime on the road, I’d had several close calls before. But this time my guardian angel was on lookout, driving what turned out to be a very good looking and capable compact 3-row import SUV. Thank you Mitsubishi.

Tony wrote on March 26, 2019 - 11:52pm Permalink
I own a 2018 Mitsubishi Eclipse Cross(MEC) and the S-AWC saved my life too a couple of weeks ago when a person driving a Chevy pick up truck cut me off and by accident dropped off a sofa in my lane. I was doing 70 mph when this happened and I had maybe half a second to react. My MEC did not complain and I was able to jump to the other lane in no time without lossing control of the vehicle. I do not care about car reviews anymore. I love my MEC and the S-AWC makes all the difference. I feel sorry for the other other name brands.