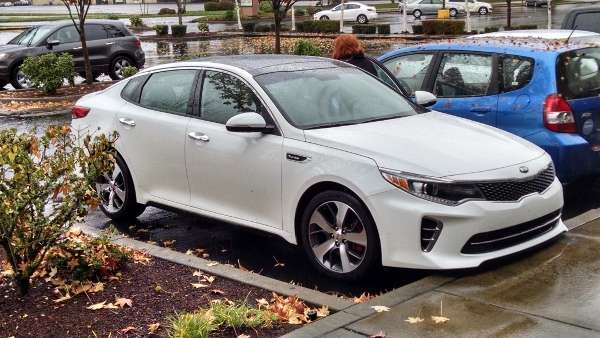 How does 2016 Kia Optima SX Turbo Launch Edition hold up to the competition? Surprisingly well.
Advertisement

Too often when shared with family and friends that our latest drive review features a Kia car or crossover, we receive that rather condescending wink of the eye and nod of the head as to a predisposed notion that “ isn’t Kia the cheap one?” ‘Crap’ if you will in automotive jargon. Apparently these well meaning folks haven't been behind the wheel of a Kia in quite some time.

Recently, while attending the Los Angeles Auto Show, one couldn’t help but notice the Korean automotive brand’s growing presence on the world stage of auto-innovation. Prior to attending the show, Torque News took delivery of a 2016 Optima SX Turbo. This week long drive experience, along with a previous drive review of 2016 Soul EV, was once again, one of eye-opening enlightenment as to how far the Korean upstart has come since the turn of the new millennium. 2016 Optima SXT would mark the third Kia drive review conducted by this journalist in as many months.

I’ve truly grown to appreciate the brand for its people-friendly drive and ride experience, new found quality, and seemingly near mechanically bulletproof high-output 4 cylinder turbocharged gasoline fueled engines. While not the most fuel efficient in the industry, the "loud pedal" is certainly there, as is one of the broadest, usable 4-cylinder torque bands found in automotive engineering today. Love it!

Kia wants to earn your business

I’m not quite sure how a car company that offers a very inclusive 10 year 100,000 mile warranty, “standard” throughout the lineup, still retains the public image and reputation as “not so good,” cheap, and plasticy. Looking to the warranty, Kia tells us that they can’t afford to market a car of low quality, and remain in business in the U.S.. We believe Kia.

From where we sit: 2016 Kia Optima SXT “Launch Edition” is none of those things, and in-fact, surprises at every turn of the head and steering wheel for that matter. For one’s dollar spent in a very competitive near-premium midsize sports sedan segment, you would be hard pressed to identify a greater initial purchase value than KIa Optima. And frankly, while taking nothing away from the competition, Kia Optima features one if not the most comfortable power adjusted leather driver’s seat in the segment.

The measurement of perceived value in a car or light truck is often one of personal perception and a very near instantaneous visual hit, touch and smell of the subject; while dodging the ongoing diatribe of the well meaning salesperson demonstrating the car. This is where automotive journalism comes into play.

Initially, when I received our 2.0 Liter fuel injected 4-cylinder gasoline 2016 KIa Optima SX Turbo, I quickly jumped to the conclusion, based on initial assessment of looks, dimension and horsepower rating, that the exceptionally well equipped Optima SX with optional “Launch Edition” infotainment, navigation, and active safety features, package would be an apple to apple comparison to 2016 Honda Accord. Or in a stretch, approach the refinement and accommodations of Acura TLX. I said stretch!

Not in the midsize group, anyway. What Kia Motors does do exceptionally well through 2016 Kia Optima SX Turbo, is offer perhaps the greatest dollar for dollars. tech-rich performance value in the entry-level premium midsize sedan segment. And does so for $1,000s less than the competition.

Although Kia Optima SX Turbo may come to market with a proprietary quirk or two, and, despite what the Kia Haters say, 2016 Optima in person is darn good looking; exudes high-end quality fit and finish while offering very comfortable and ergonomically correct interior confines.

Our passenger and rear seat comfort test ranks with the best of the midsize premium metric class, while approaching the quality surface and touch compilation of many sedans breaching the $45,000 MSRP barrier. What Kia may lack in rear seat area legroom, it makes up for in far-back driver’s seat tracking capability.

Kia, like Honda, Acura and Toyota, creates its own sub-segment and fills it very well

Granted, Kia Optima is not quite as loaded with standard features as a comparably sized Acura, nor does Kia attempt to out-option 2016 Civic V6 Touring Sedan; it doesn’t have to. As earlier stated, Kia, through Optima has created it’s own sub-niche in the midsize near-premium sports-sedan segment.

looking to Kia’s strategically staged MSRP of $33,215.00, Optima SX Turbo with optional UVO Infotainment and Connectivity platform is priced $6,000 below a comparably equipped V6, 9 speed Acura TLX with Technology package. But then again, the Kia doesn’t feature all-wheel-steering, nor is the interior as quiet as TLX V6. Looking to 2016 Honda Accord Touring Sedan, we find “Active Noise Cancellation”Kia needs it

When driven at normal transitional speeds, Kia optima Turbo is as quiet as any normally aspirated car in its segment. However, the initial idle when cold is a bit rattled, and when pushing the peddle to the metal, Kia’s interior noise level rises to that of a teenager letting loose on a drumset in the next door neighbor's garage.

O.K., that comparison may be just a bit of an exaggeration, but you get the picture. Kia’s 4-cylinder turbocharged engine has its own unique idle sound, and exhaust tone. But once one gets used it, the fun begins.

A week or two prior to our Kia Optima turbo test drive we’d closed the door on a 2016 Honda V6 Touring Coupe. One if not the quietest and refined Accords in Honda history. Honda utilizes electronic active noise cancellation, Kia needs to.

For pure by the 'seat of the pants' fun-to-drive dynamics, and while looking closely to the price-point, one would be hard pressed not to hand the drive-performance category win to Kia Optima. We love the turbocharged torque-band, near instant acceleration and spot-on driver to instrumentation positioning experienced in Kia Optima. However, the suspension and wheel to road feel could be improved just a bit.

This is where that personal opinion is injected into an otherwise very objective piece. Where I believe that Optima could be further improved is in the general ride and handling of the vehicle on country 2-lane sweeps, Honda and Acura take the segment here with superior ‘reactive dampers, and a much tighter steering wheel to road feel. Also, although our test mule did feature ride stability and traction control, our primary front-wheel-drive sedan did torque-steer to the right when accelerated hard off of the light. I’m not too crazy about Kia’s dash layout and center stack.

Hey, it all works very well: Although for me, looks a bit too ‘cartoonish’ in its otherwise well laid-out visual interface. Also, I found the ‘smart-wheel’ to be a bit less than ‘intuitive in its layout. I highly recommend spending some quality one and one time with Optima’s owner’s manual prior to an extended drive, soon to be available in smart-phone app-form. Note: I love the red-lit dash. Nancy tells me this is a “man’s thing.”

Granted, city streets are often beat! Eugene, Oregon is no exception. However, when traversing over surface roads, we found Optima to be just a bit unstable when pushed toward double-zeros, and lacking a “tight”wheel to road feel, despite a dial-a-ride mode selector that did adjust the steering wheel and throttle response when adjusted.

The short story: My copilot Ms. Nancy king, formerly of the Jazz Underground loves Kia. We’ve had 3, including the Sorento SUV, Soul EV and the Kia Optima Turbo drop by the hacienda for a week stay.

For Ms King, the one and only power height-adjustable passenger seat in the segment made a great impression. As did the exceptional sounding Harmon Kardon OLS ™ premium sound system, full glass roof, heated and ventilated power front seats, Merlot Red leather seat trim, and exceptional active safety features including a surround-view backup camera.

While not perfect, the 2016 Kia Optima SXT sets a new benchmark in Kia engine performance, fit, finish and interior comfort. Although not directly comparable to Acura TLX in road handling and interior quiet, Optima comes close in total combined package, with an MSRP comparable to 2016 Honda Accord EX-L V6 with navigation. It’s a very capable, good looking sedan well worth serious consideration.

Which car is best for you? That’s a tough call. But, if you’re in the market for a under $40,000 4 door sedan exhibiting measurable performance tendencies, while featuring notable active safety features standard, Kia Optima has earned your test drive.