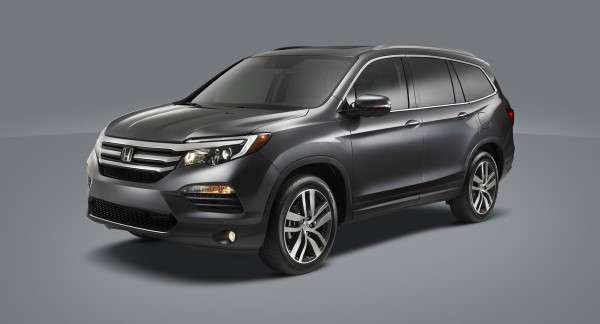 Today’s Chicago Auto Show unveiling of the all new 2016 Pilot confirms Honda’s design direction confirmed through a much refined Pilot and yet another teaser image of Ridgeline pickup truck. Honda’s on a roll!
Advertisement

t’s show time for Honda in Chicago, with toastmaster, senior vice president and Honda Division general manager Jeff Conrad on center stage. In true Honda style, the audio and visual impact of a short film featuring the development timeline of Pilot ticked off the years spent at these events for the present automotive press.

Surely, 2016 Honda Pilot would hold a surprise or two, perhaps a futuristic drivetrain or integrated transmission technology proprietary to the brand. Something that would set the automotive industry on its collective ear while shaking the press into a state of unprecedented, attentive alertness and palpable excitement. Didn't happen! Afterall, Honda Pilot is an SUV, it’s not Acura NSX. Much like the good looking office girl down the hall, We like the new look of Pilot, but know nothing about its character.

Nonetheless, as anticlimactic the unveiling of yet another light truck or SUV may be for the automotive press, 2016 Honda Pilot when released may just be the end all, be all, of mega family movers, with a twist. Looking to the pleasing visual and intuitive, user friendly environment that’s Pilot, if priced accordingly, this 3 row main sector urbane crawler will experience the highest sales in its segment, based on a contingency or three: Availability, price and return customer loyalty, in that order.

With the market release of 2016 Pilot, and eventually Ridgeline pickup, Honda will hold the winning card hand in the fastest growing automotive segment in North America. By taking the truck-look out of Pilot, Honda has broadened the appeal of an affordable mainstream Tahoe slayer. Now, Honda loyal that require a bit more passenger room or hauling capacity than CR-V can opt into a much improved 3 row SUV without crossing into the Acura line-up, which raises a question or two for us.

How far can Honda evolve Pilot without undermining Acura MDX sales, when will Pilot be released and how much will it cost?

Those are questions that Honda couldn't answer today in Chicago, but we did learn a thing or two. for 2016 or 2017?, Honda Pilot will be equipped with a greater fuel efficient 3.5 Liter Earth Dreams ™ direct injected i-VTEC gasoline engine with cylinder control, a choice of two transmissions; a much improved 6 speed automatic and(as found in MDX) a 9 speed automatic transmission with paddle shifters. We anticipate a horsepower and torque increase of 10%.
Also for 2016, Honda engineering,without divulging specifications, has improved Pilot’s all wheel drive system through “intuitive” traction sensors for greater performance in ice and snow. That’s all Honda’s telling us today on the mechanical side. As to interior accommodations, this is where Pilot will shine!

2015 “The year of Honda’ is shaping up to be just that, a great year for seasoned Honda fans and new buyers alike.

That’s just a taste. Watch Jeff’s presentation if you find a moment. It can be viewed here.

Patrick Nowak wrote on February 12, 2015 - 8:28pm Permalink
Own a 2014 Acura MDX and currently in the market for a 2015 Acura TLX.
Parks McCants wrote on February 12, 2015 - 11:30pm Permalink
Welcome Patrick. Are you down sizing? Or adding a TLX to your stable? Both are well built. We enjoy driving TLX, Best of luck and thanks for dropping in.
David wrote on February 13, 2015 - 9:58am Permalink
Not many true mid-size SUV's left in today's market. Seems like most manufacturers are going towards the uni-body crossover/minivan hybrid type vehicles. Toyota and Jeep are the only manufacturers left making a true "body on frame" SUV with much more off-road capability.
Parks McCants wrote on February 13, 2015 - 6:31pm Permalink
True enough David. Although I was skeptical at first, having owned Ford, Chevrolet, Geo, Dodge, Jeep,Nissan,Toyota, Rover and Suzuki Trucks and SUVs, I find the Honda unit-body Ridgeline to be exceptional when in the dirt. As to the SUV offerings? I haven't driven them hard off road. I'll have to get back to you on that in the near future. Thanks for dropping in.
Patrick Nowak wrote on February 13, 2015 - 9:20pm Permalink
Not downsizing from the 2014 MDX. We expect to keep it for a long time. The 2015 Acura TLX will be a replacement for my wife's low mileage 1994 Ford Mustang GT that is now old enough to vote. She only drives a few thousand miles per year, if that, so truth be told, the person with the most seat time in the new TLX will probably be me.
Parks McCants wrote on February 16, 2015 - 12:03am Permalink
I'm sure you'll enjoy the TLX. From our personal long-term drive review experience and reader feed back. A great value for the $. Fun to drive and comfortable!