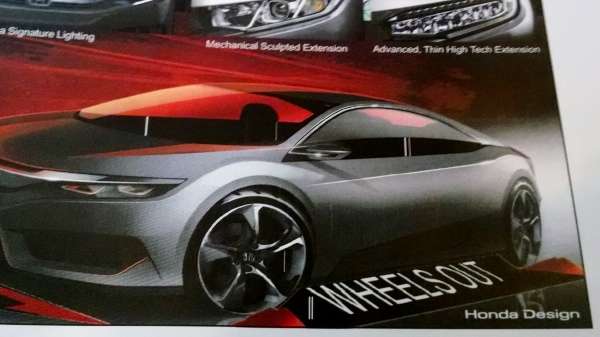 Often 2 or 3 inches can make or break a great car design. 2016 Civic “Wheels Out” design language sets a new benchmark for the “C” segment.
Advertisement

2 to 3 inches distributed throughout the ‘C’ segment busting design that is 2016 Honda Civic makes a big lasting impression as to style, comfort and sense of control.

Honda calls the 2016 Civic Sedan design language “Wheels Out.” It’s something that’s been around automotive design for decades. Build the car slightly wider, lower, and visually fatter, by accentuating the fender, body-line interface.

Stuff the fender wells with big-wheel, low profile tires, than drop the roof line just a fraction( .08 inch) sloped to the trunk line. Done! Well not quite, but you get it. 2016 Honda Civic Sedan looks low and wide because it is! 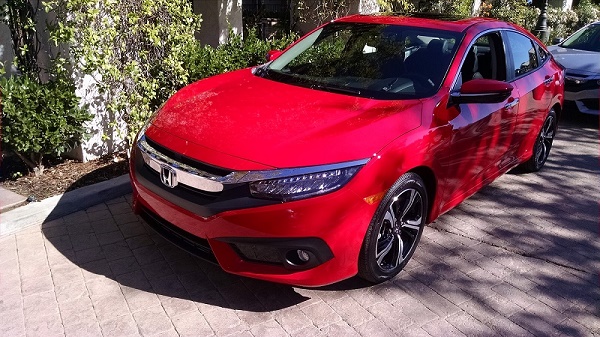 It’s also the largest , widest and longest Civic Sedan ever built, yet weighs less than the outgoing 9th generation sedan, that’s engineering at its finest. 2016 Civic wins “North American Car of the Year” for several reasons, a segment busting 10th generation body design is just one of them. Catch our Honda Week in review here.

looking to Civic’s interior we find a few more

The first time I drove 2016 Civic Touring down Mulholland Drive, I was initially captivated by the new found power and rather seamless torque produced by Honda’s Earth Dream ™ turbocharged 1.5 Liter VTEC engine. That was cool, but then it hit me! This was the most comfortable and quietest Civic I had ever driven.

Tall guy fits in the back of Civic The measurable difference for me at 6 ft, 5 inches tall was the head, hip and legroom discovered in Civic’s power adjustable, heated driver’s seat. Ergonomics? Very close to perfect. With that said, I did something that most auto review guys and gals generally miss in their initial drive and ride experience. I sat in the back seat.

Here’s where that 2 inches comes into play. Honda engineering designed 2.2 additional inches into the 2nd row, right where it was needed, and,lowered the seating position by 1.6 inches, while adding 3 + inches of cargo space to the trunk.

Honda Engineering has done a commendable job of translating a sense of “added control” to the driver by placing him or her in a lower, eye’s over the road visual driving position. Again, it’s just the matter of less than 2 inches, Honda style.

Guest wrote on January 22, 2016 - 11:01am Permalink
It doesnt have i-VTEC technology :-)
Parks McCants wrote on January 22, 2016 - 6:53pm Permalink
Welcome guest: I didn't state that it did. There's a difference between I-VTEC and Honda'a latest turbocharged VTEC engine. Check it out here:http://world.honda.com/automobile-technology/vtec-turbo/
jay wrote on January 30, 2016 - 12:42am Permalink
There is no loft control . Only valve timing control. So its is VTC . Not usual VTEC. I think they use vtc for turbo engines. By the way whole powertrain is sourced from Japan. Engines and transmission
Parks McCants wrote on January 30, 2016 - 8:21pm Permalink
Welcome Jay... whats you talkin' about Willis ? Please go to the link in the comment above yours and read the engine description. I'll take a look at the specs when I drive the all new Civic Coupe Touring next week in San Diego. Take care.

Tesla Contemplates A New Strategy for China Retail even As Sales Boom
Jay Leno on Elon Musk & EVs: “I Think He Should Get ... Credit"
END_OF_DOCUMENT_TOKEN_TO_BE_REPLACED