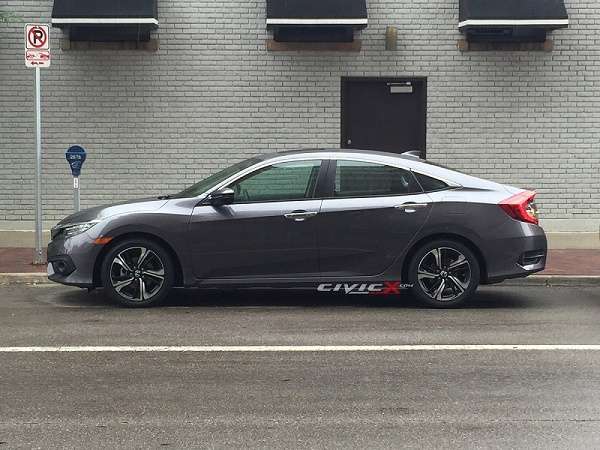 Honda is producing the first live Youtube reveal of the much anticipated 10th Gen Civic September 16, So what’s the big deal. Spoiler alert, we already know what it looks like.
Advertisement

Autoblog and owner’s forum CivicX.Com saw it first: Personal. I don’t give a damn as to when or where we’ll finally lay eyes on Honda’s 10th Generation Civic, I’m here to drive it! But come on, someone at Honda, or one of their event wranglers decided that it would be o.k. to drive 2016 Honda Civic through the streets of Ann Arbor without camouflage. Hum, just a bit unusual.

O.K., 10th Gen 2016 Honda Civic looks good. What blows this journalist away, is the great lengths that Honda and all manufacturer’s go to, just to have that ‘ a-ha’ moment blown by a supposed spy shot. This happens more often than not today in our snap-happy, cam-phone toting selfie society. Of course in this particular case, Honda public relations is just a bit suspect. After all, Honda’s second to none as to building anticipatory angst when it comes to a new car reveal.

Any press is good press, right?

In speaking with Honda National Public Relations Director Ms Robyn Eagles, we’re assured that this premature photo op of sorts was not intentional. I believe Ms Eagles. So who’s hanging by their thumbs this morning in the Honda corporate dungeon?

Well, now that we know what she looks like A tip of the collective hat to Honda engineering and design for producing a production offering that closely shadows the NYIAS Civic concept, one of our favorite Honda coupe manifestations to date.

After driving 2016 Acura ILX and the substantially refreshed 2016 Honda Accord, we had a pretty good idea as to where Honda was headed with Civic design.

Taking the ‘compact car’ out of Civic Truthfully, there’s little surprise found for Honda-Torque News in this photo confirmation of Civic’s design directive. Honda’s uptick, uptrend, and up-sized, more car for your money philosophy carries through to the Civic lineup, something we had anticipated after driving 2015 Honda Civic sedan. After all, where else could Honda go with Civic design but upscale?

When we talk ‘compact global-platform,’ hatchback design compatibility, while looking to the competition, specifically Toyota Corolla, 2016 Honda Civic comes up to the proverbial plate swinging!

We haven't viewed the specification sheet yet, so to assume like our friends at Forbes.Com, that Civic is much larger,(wheel base) is a bit premature. We do anticipate a refined Civic with a bit more peddle and greater personal connectivity prowess.

But, we will go out on a limb here with our latest predictions as to Civic ride improvement, performance, expanded personal connectivity and cabin quiet.

If one picture says a thousand words, then at the least, this bride before the wedding reveal confirms that Honda’s design directive carries through to Civic, as the entire lineup is reinvented in 2015, “The Year Of Honda.”

Parks McCants wrote on September 12, 2015 - 2:23pm Permalink
Thanks, to whoever took the photo, you just saved me a trip to Los Angeles. We'll be driving 2016 Honda Civic the end of September with a follow up drive review in Mid November. None the less, the You Tube party complete with music, vendors trucks and guest interviews should be a good one. our buddy Honda Pro Jason will be on site. Me, I'll be pod-casting commentary on the event from our office in Eugene, Oregon. You may catch me online Wednesday 16th, time to be announced. Go to Parks McCants You Tube and subscribe. your comments are always welcomed.
JeffS wrote on September 13, 2015 - 1:59pm Permalink
Hey there Parks, hope you're having a nice weekend. Like what I see in the pics. Can't wait to see the SI and Type R. The rest of the players in this niche all are about to start playing, "second fiddle". When the SI arrives, its counterparts are likely to become outdated real quickly as well. The, "Type R" when it finally gets here is sure to surprise in the best kind of way. Now if they can just get their act together on the NSX and tweak the RLX a mite, (I know, we've had this discussion about the RLX), Honda/Acura will have, "Premium" offerings from the bottom to the top that are gonna be hard to beat. Considering what they have accomplished over the past few years, with the relatively few hiccups along the way, it's just an absolutely amazing feat that other Mfgs. would be hard pressed to match. I'm not slamming any other car Mfgs., truth is across the board pretty much all of them have some incredible vehicles to offer, (less maybe the Smart car). However, few, if any could pull off a complete revamp over the relatively short amount of time with the same apparent success that Acura/Honda has. In the Mfg. world in general, quite the impressive effort. In general, it seems to me, over the past decade or so, the Auto industry as a whole has learned a valuable lesson, "Rest on your Laurels too long and the others who innovate are sure to leave you behind". It's not just about, "Improving" the breed, these days, reinventing the breed is the wave of the future. Honda, "Welcome back to the future". Have a good week there Mr. Parks
Parks McCants wrote on September 14, 2015 - 12:11am Permalink
Thank you JeffS! Well said... I'll get back to you in two weeks when I plant my butt in the seat!
danwat1234 wrote on September 16, 2015 - 11:58pm Permalink
"..Youtube reveal of the much anticipated 10th Gen Civic April 16, .." You mean September 16th, and the reveal sucked as did the 2016 Prius reveal. Both cars are nice though. A little concerned about the lower ride height though.
Parks McCants wrote on September 26, 2015 - 1:21pm Permalink
Thanks danwat 124 for the heads up.

LG's New EV Battery Plant Is a Welcome News for Tesla
Tesla Giga Berlin's New Hurdle: It's Not Only the Gov't, but Now Tesla Itself
END_OF_DOCUMENT_TOKEN_TO_BE_REPLACED