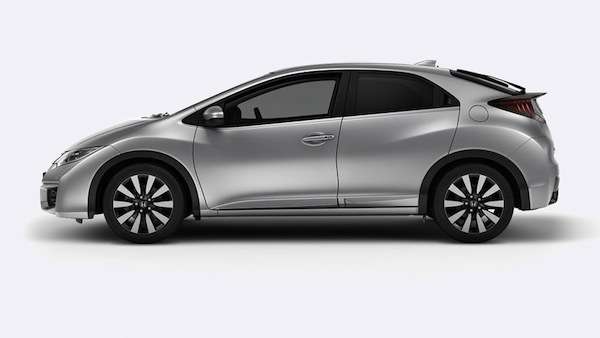 2016 Honda Civic hatchback makes 3 in the ‘Year of Honda’

Not too long ago, the only subcompact or compact hatchback in the U.S. Honda stable was the Japanese upstart Fit. Is 3 hatchback choices too many?
Advertisement

With Honda Civic fans demanding the return of the compact Civic hatchback to U.S. markets, the maker will soon be the only automotive brand in North America to offer 3 hatchbacks in the subcompact and compact segments.

Looking to recent sales numbers, we suspect that Honda’s upstart subcompact 2016 HR-V crossover may be eroding Fit and Civic sales in the U.S., and are collectively just a bit surprised to see a Civic hatch coming down the line.

As confirmed by Honda’s Sage Marie at the world premier of the 2016 Civic sedan, soon to follow the fall release of what Honda is proudly labeling the most technically advanced and dynamic driving experience in Civic’s 4 decade history, will be the spring release of the first Civic hatchback for the U.S.in well over a decade.

Built in England on Honda’s world-compact-platform and imported to North America, the EarthDreams ™ turbocharged gasoline powered 5 door hatchback, while sporting the Civic name plate, will be nothing like the sub compact Civic of past generations.

Civic has been long supersized, pushing the limits of the compact classification, replaced in the subcompact segment by the popular Honda Fit 5 door hatchback.

2016 Honda HR-V puts AWD back in the subcompact segment

Fit and HR-V are not Civic. Honda-Torque News predicted that Civic hatchback would not return to North America due to the sales success and expanded aftermarket customization of Honda Fit following the 2015 Las Vegas SEMA Show. Apparently the powers to be at A.H.M. do not agree.

While there’s no talk of AWD for the 2016-2017 european inspired hatchback,, Honda loyal will witness the return of the Civic hatchback to Canada and the U.S., albeit super sized, and based on the 2016 Honda compact-global-platform 4 door sedan. There is no talk of a 3 door hatchback, direct injected diesel, or high performance direct injection gasoline turbocharging for the near future hatchback, yet.

What we do know is that the 5 door hatchback will push the size and sales price restraints of the compact classification, weighing in at close to 3,000 lbs, and be more attuned to hauling paddle boards, groceries and children than carving up an auto cross.

The true sports minded not so hidden among the Honda love fest crowd will most likely opt to the Civic Si; while the financially well heeled sprinkled amongst us will sit patiently with reservation in hand for the long promised Civic Type-R; arguably the extreme driving sport side of the Honda stable,something that Honda fans have eagerly anticipated for years.

JeffS wrote on September 23, 2015 - 6:18pm Permalink
Hey there Mr. Parks; Things are starting to get real interesting. What a fantastic job they did on the Civic. The prospect of the New SI and more close to home, the Type R are intriguing to say the least. From what I see so far, Honda is rewriting the book for this class of car. I can foresee the difference in Gen 10 clearly, My '14 SI is more like a toy, a very fun, flog me, well built toy that I am thrilled with. A good part of the attraction has always been its, "Toy" qualities and Spartan nature.The new SI is going to be more mature, refined and getting, "Serious". The Type R will more than likely be setting some pretty incredible benchmarks and may be somewhat in a class by itself. By the way, did I mention, Honda did one fine job on the Civic. Be Well Parks.
Parks McCants wrote on September 24, 2015 - 10:33pm Permalink
Welcome JeffS. I agree! The 2016 Civic remains true to the NYIAS concept car, sans the rear wing and the blade-side mirrors. It's a great looking car. I'll be seeing it in person Monday with a bit of drive time. looking forward to that. Hey, your 2014 Si is an awesome driver! How'd your engine upgrade come out? Always a pleasure to read you Jeff. take care.
JeffS wrote on September 25, 2015 - 4:01pm Permalink
Hiya Parks, still ,waiting on my pulleys and wheel/tire package to get here. Should be here next week sometime, (hopefully). I'm hoping to have all the parts to do it in the next couple weeks. With regards to my comments above, don't get me wrong, my '14 is definitely a keeper. I think the new SI is going to be a bit different experience. Not quite the who gives a F-ck, flog it, everyday joy ride. I guess what I am trying to say is I think the next SI will lose some of the, "Playful" nature of the 9th Gen. Not a good or bad thing, just a mite different. Now the Type R has got my attention when it gets here. The NSX apparently drifting out of reach, the Type R might just be what I am looking for. On a different note will be watching for your seat of the pants on your 1st new Civic test drive. From what I gather, even your rather tall self will fit nicely and be more than comfortable. Not only does the exterior look sweet, they did a great job on the interior, definitely a move upscale. I agree with what you elude to in your article, the stiffest competition for the new Civic, or vice versa, will be from within Honda's/Acura's line up itself. They made the new Civic so nice I can see it savaging sales from the ILX. Have a Good weekend, I'll stay tuned.
Parks McCants wrote on September 25, 2015 - 4:23pm Permalink
Welcome JeffS. Please keep us posted on your Si project. I'd appreciate a photo or two of the project when completed. Have a great weekend.
JeffS wrote on September 25, 2015 - 4:32pm Permalink
Excuse my ignorance, how do I get a photo to you?
Armen Hareyan wrote on September 25, 2015 - 5:05pm Permalink
Hi Jeff S send me an email by clicking Contact Us at the bottom of this page and I will reply to you.
Parks McCants wrote on September 25, 2015 - 5:16pm Permalink
Hi JeffS. [email protected]
ac wrote on September 28, 2015 - 9:25am Permalink
Great, need a Matrix/Vibe replacement badly, hopefully it will have slightly higher ground clearance.
Parks McCants wrote on September 28, 2015 - 5:44pm Permalink
I throw a measuring tape under the nose tommorow on our first demo ride. Take care.