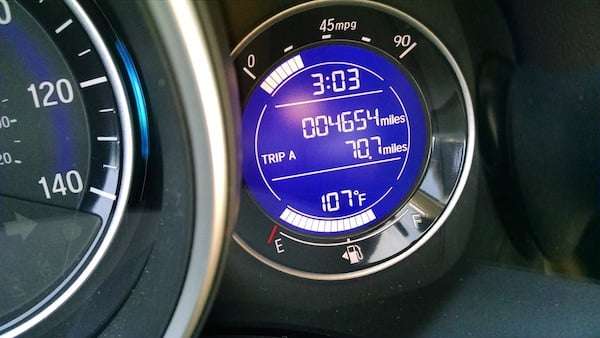 What's it like to drive 2015 Honda Fit through Phoenix Arizona durring a summer-like May 1 heat wave? With 107*F tempeartures lifting the thermometer, we were about to find out.
Advertisement

Returning from Honda’s Cincinnati reveil of the all new 2016 Pilot, we took a detour through Phoenix, Arizona. 2015 Honda Fit driver travels through Phoenix encountering 105*F temperatures. What happened next was a bit of a surprising.

For those of our readers living in the Near East, or the Southwestern United States, blasting down the road in 100*+ temperatures is often the norm. Good enough! But this 'good old boy' from Western Oregon found the first week in May to be unseasonably hot, even for Phoenix, Arizona. Landing at Sky Harbor the night of May 1, we headed for the “Parking Spot 2” to pick up our loaner 2015 Honda Fit EX-L equipped with Honda Sat-Link, Navigation and Voice Command.(MSRP $20,925)

There she was sitting in the dark, parked next to a white Chrysler 330 C; purple metallic, kind of cool looking

Having spent some ‘screaming’ Fit seat time on the “O.C.” and Los Angeles freeway systems, we knew how well Fit performed in mild weather conditions. Our Phoenix mission was to test run Fit in summer dessert driving conditions; the weather gods cooperated fully!

Back in L.A. we fell madly in “like” with Honda’s very transformable compact 5 door hatchback. Reengineered in 2014, and built on a “world-chassis” manufactured at Honda’s newest North American production plant in Celaya, Mexico, Fit is quickly becoming Honda's best sub-comapct seller in North America. 2015 Honda Fit brings a combination of good looks, great utility and fun to drive tendencies to a too often boxy, boring and underpowered compact hatch segment, not the case with Honda Fit.

We’ve been accused by more than one reader of having Honda-fan-boy tendencies. Note the “Honda” segment carefully placed before Torque News. Setting that redundant observation aside, we state without reservation: Fit is exactically as presented by American Honda Motors; a fun to drive, economical and safe subcompact 5 door utility hatchback featuring “Big Car” seating comfort, road handling, and surprising interior spaciousness. So let’s get on with it!

Black’s a beautiful thing, and we like leather. However, on the first day of May late morning temperatures in Phoenix had risen to double digits. By 11:00 am, it was already cooking hot with higher temperatures expected for the late afternoon. None the less, Torque News was on a mission. Could interior plastic trims melt in these temperatures?

Noting the 100*+ outside temps, the cabin temperature of our purple on black leather Fit most likely approached 130*. With water and keyless entry fob in hand we opened the door, pushed the keyless ignition button, and cranked up the A.C. to the full on “cold blast” position. Unfortunately the transition time from blistering heat to reasonable cab temps takes a few minutes in Honda Fit.

Truthfully, we(I) did have to power-down the side windows to remain in the car while the A.C. ramped up. Red-faced-dripping-sweat delirium had taken over at this point, so... we’re unable to report the exact “down to livable temperature point” timeline. But, heading out to Interstate 10, and then driving to downtown Phoenix,(roughly 25 minutes from the Wigwam Golf Resort) a reasonable cab temperature was reached in a matter of 5 minutes or so.

Note: It did take a bit of seat and air-louver adjustment for this tall driver to gain full heat relief from the air conditioning. We never did experience “ too cold, turn it down!” relief from Fit’s rather noisy manually adjusted climate control. While the air conditioning dead reach a tolerable temperature, it may not be the most outstanding feature incorporated in 2015 Honda Fit.

Finding a reasonable balance between fan noise and temperature proved to be a bit of challenge as Freeway driving temperatures reached 107*F; damn hot!

Eventually we reached a compromise as to cab temperature and fan noise. We discovered “full air, #3” position on the fan speed to do the trick. With the Fit’s full-tech Sirius Satellite equipped stereo system dialed in, and volume set at 20% or so, we found the fan’s air blast to dissipate into relative background noise, as conversation between driver and passenger returned to normal-quiet conversation tones.

Looking to the competition, we find nothing(to date) in the economy subcompact 3 or 5 door hatchback segment that offers as refined a ride as 2015 Honda Fit CVT.

While it may be a bit of a stretch to refer to Fit’s ride characteristics as a “float” we will venture out to say that we’ve yet to encounter greater control,(tracking) and road-surface-transitioning in a subcompact car. It’s more of a controlled “glide” if you will. With 4500 miles showing on the odometer of our purple Fit, the reactive amplitude dampers and ride stability acted in tandem to achieve an exceptional “keep on driving,” drive and ride experience.

We like the right hand-side blind spot monitor, and found the voice-activated navigation feature to work well after breaking through the learning curve. Also, although mechanically adjusted, we re-discovered a nicely finished and very comfortable driver’s seat within a surprisingly roomy driving, passenger environment.

For us, based on driving all of Honda and Acura Divisions North American car and light truck offerings, we find Fit to be one if not the most roadworthy in the subcompact and compact segment. furthermore, we find Fit’s ride refinement, interior ergonomics, noise level and seating comfort to be exceptional, encroaching on Civic and CR-V utility and comfort presented in a much smaller, maneuverable package.

Bottom Line: Fit out-performed us in the extreme heat of the Arizona Sonoran desert, while we pushed our hatchback hard on the back road to Red Rock Sedona; transitioning through stop and go freeway traffic, Arizona state capitol excursions, and a dirt-road side trip to Pleasant Lake. At times, Fit's climate control had us convinced that exterior temperatures had cooled a bit.

Opening the driver's side door we mentally screemed Hell no! It was still in the low tripple didgets, Fit's climate controlled A.C. was working much beter than earlier experienced. Perhaps removing the huge "big Gulp" cup from in front of the left side cooling vent had been effective after all. Putts!

Despite extreme high heat and gusty side winds, Fit didn’t so much as miss a beat, while sipping gasoline in spite of 107*F late afternoon temperatures and our sometimes erratic driving. After we stabilized Fit’s cab temperature, the climate control maintained the desired temperature level without faltering.

As to the engine and transmission performance, we didn’t detect any power fade, excessive cooling fan running, or tell-tale signs of engine or transmission oil thinning and pending failure despite reaching a near temperature high of 108*F for the second day in May.

We like Fit for its good looks, drivability, larger car-like comfort, transformable interior, reasonable MSRP and fun to drive performance characteristics, and find this not so little hatchback to be the go to car in a growing sub compact segment.

DavidC wrote on May 4, 2015 - 1:26am Permalink
The title of this article...and then the content. Lots and lots of words about nothing...i wasted about 4 minutes of my life. And I have a Fit
Parks McCants wrote on May 5, 2015 - 10:48pm Permalink
That's nice David. what do you find to be a waste of your time in the article? The title may be a bit sensational. Have you experienced 107* heat while driving your Fit? How'd you do? Did your air conditioning hold up? Thanks for dropping in. I'll leave your comment up for my army of readers to chastise.